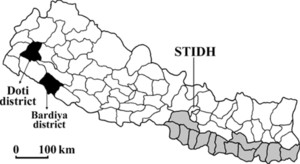 Expansion of Visceral Leishmaniasis to the Western Hilly Part of Nepal

Visceral leishmaniasis (VL), known as kala-azar in Nepal and India, is a deadly vector-borne disease, which is endemic in Bangladesh, India, and Nepal in South Asia with estimated more than 60% of all VL cases worldwide, primarily affecting in rural areas.1,2 In Nepal, 5.7 million people are estimated to be at risk and mainly confined to 13 districts southeast of the Terai region, which borders the VL endemic districts of Bihar state in India (Figure 1).3 A total of 23,368 cases with 311 deaths have been reported between 1980 and 2007.3 The disease is highly endemic in rural poor areas where most deaths are reported. People residing in these areas have little knowledge about the disease; hence, VL cases may be underestimated in these regions. Treatment failure with pentavalent antimonial (sodium stibogluconate [SSG]) has been reported in the recent years in Nepal,4 and as a result, liposomal Amphotericin B is currently recommended by National Program of Nepal for kala-azar treatment. Not only is the emergence and spread of drug resistance troubling, but VL cases have been recently reported from the regions that were previously considered to be non-endemic in Nepal.

Here, we describe a 13-year-old male from Doti who was referred to Sukraraj Tropical and Infectious Disease Hospital (STIDH), Kathmandu, from Nepalgunj Medical College in February 2009. The patient attended several clinics and hospitals in Nepalgunj, including India, with chief complains of high grade fever for 3 months associated with chills and rigors in 2004 before hospitalization. The patient had no history of travel to India or VL endemic regions of Nepal before fever started. Fever subsided, and general conditions were improved after locally treated with antipyretics and antibiotics followed by anti-malarial treatment. However, within 1 year, the patient was admitted to Nepalgunj Medical College with chief complains of fever, abdominal distension, and weight loss. The patient went under clinical and laboratory examinations for 12 days in the medical college. A provisional diagnosis of VL was made based on the positive result of the rK39 dipstick test (InSure; InBios Int, Seattle, WA). The patient was referred to STIDH for further investigation and definite diagnosis.

The patient was found to be anemic, and the spleen size was approximately 5 cm below the left costal margin at the time of admission. Initial hematological examination showed a white blood cell count of 5,100/mm3, hemoglobin level of 5.8 g/dL, and total neutrophil count of 56%, with a lymphocyte of 44%. Random glucose level was 88 mg/dL, with blood urea of 17 mg/dL and serum creatinine of 0.8 mg/dL. Leishmania species amastigotes were found in the bone marrow aspiration smear, and rK39 test was positive, confirming Leishmania infection. Human immunodeficiency virus (HIV) infection was excluded by the negative result of the rapid diagnosis test (Determine HIV-1/2 kit; Abbott, Minato-Ku, Tokyo, Japan), and tuberculosis was excluded by the negative observation of the chest X-ray examination as well Tuberculin Purified Protein Derivative (PPD) test for this disease. The patient was treated with Amphotericin B with the initial dose of 0.5 mg/kg body weight, which was gradually increased to 1 mg/kg for 14 days, with total dose of 405 mg. The patient was given a transfusion of six units of whole blood during treatment and was clinically improved as indicated by the absence of fever, shrinking spleen size, and absence of amastigote. The patient was free from symptoms for about 5 months after treatment.

The patient revisited STIDH in July 2009, with chief complaints of fever and abdominal distension. Physical examination revealed anemia and splenomegaly measuring 8 cm in size below the left costal margin. Ultrasonography of abdominal revealed gross hepato-splenomegaly with the liver size of 17.6 cm, and spleen size of 18.7 cm. Laboratory examinations showed renal function, and platelets count was within normal range but the hemoglobin level (7 mg/dL) was decreased. Although amastigotes were not found in the bone marrow smear, a relapse case of VL was suspected based on the clinical features, decreased hemoglobin level, and previous VL history. The patient was treated with Amphotericin B (1 mg/kg body weight) for 18 days with a total dose of 515 mg. The patient was given a transfusion of 2 units of whole blood during treatment and was clinically improved with increased hemoglobin level of 7.4 mg/dL within 1 week and decreased spleen size by about 4 cm on discharge.

This is the first report of VL from the non-endemic far western hilly region of Nepal. Nepal is geographically divided into three areas: the Mountain, Hills, and Terai regions. VL transmission generally occurs in plain Terai region, with an altitude of a maximum of 305 m. However, cases have been increasingly reported from hilly regions of India and the eastern part of Nepal in the recent years.2,5 VL has been considered to be a disease of low altitude and is usually found below the altitude of 600 m (2,000 ft) above sea level.6 In the present report, however, VL is found in the hilly, far western region at an altitude of 1,113 m (3,654 feet) above sea level. VL cases from hilly regions above the altitude of 1,000 m have been reported in India,7,8 which could be because of the improved monitor system, changes in seasonal climate over the past years, and potential changes of geographical distribution of the vectors. Previously, we have reported a VL case from midwestern region of Nepal.9 However, it was unclear if this patient was infected with VL in this region because of the history of traveling to India. In this study, however, the patient had no history of traveling to India or VL endemic regions of Nepal, suggesting that VL was expanding into newer areas. The transmission of the Leishmania donovani needs a vector sandfly and potentially, reservoir animals; however, this information in the hilly region of Nepal, including the Doti district, is not available. Active VL and entomological surveillance are warranted in the far western region of Nepal to confirm this point. The patient reported in this study showed VL symptoms within 1 year after the complete standard VL treatment; however, treatment with the same drug, Amphotericin B, was able to cure this patient, suggesting that the relapse was likely not caused by the drug resistance of the parasites. The precise reason of the relapse is unclear and not the major point in this study. VL is a major health problem in Nepal and is endemic in 13 districts of the eastern and central Terai region. According to annual health report of the Department of Health Services in Nepal, VL incidence has shown to be 2.67 per 10,000 people at risk in 2006–2007.2 The VL elimination program aims at reducing incidence to 1 per 10,000 at risk by the year 2015. An increasing trend of sporadic VL cases from other parts (non-endemic regions) of the country like Doti could challenge the aim of the VL elimination program. In addition, findings of drug resistance reports from newer areas could be another obstacle in reducing the morbidity and mortality rate in the long term in Nepal. Thus, policy makers should give a high priority in expanding active VL surveillance network in the newly parasite-detected areas to achieve the realistic goal by the year 2015.