Map of Peninsular Malaysia showing the northeastern region (State of Kelantan) and Kg Kuala Betis in Gua Musang district where the Orang Asli subjects were recruited.

Graph showing Helicobacter pylori infection rate in Orang Asli (%) according to birth cohorts in years. Infection rates in Orang Asli showed a decreasing trend across three different periods with the lowest rates reported in birth cohorts after the 1970s when the state of sanitation and hygiene were better after resettlement to villages program implemented by government. 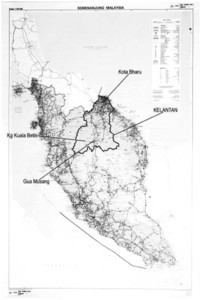 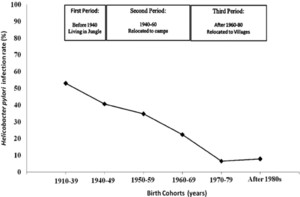 Whether the exceptionally low prevalence of Helicobacter pylori (HP) infection reported among Malays is also present among aborigines (the Orang Asli) living in northeastern Peninsular Malaysia is unknown. We studied asymptomatic Orang Asli from settlements situated 210 km from the city of Kota Bharu. The HP infection status was confirmed by a validated serology test. Nineteen percent of 480 Orang Asli tested positive for HP infection. The prevalence was 40.6% in the birth cohort of the 1940s and declined steadily in later cohorts to under 10% among 12–30 year olds. This may be related to the phases of relocation from the jungles into resettlement camps and ultimately into designated villages near rivers. The low prevalence pattern after the 1970s was probably partly a result of improvement in sanitation and hygiene practice in these villages but other unidentified factors may also be operating.

Epidemiologic data from Malaysia have repeatedly confirmed a low prevalence of Helicobacter pylori (HP) infection in the Malays compared with Indian and Chinese immigrants.1–6 The low prevalence of HP infection is consistent with evidence dating back to the early twentieth century that showed both peptic ulcer and gastric cancer were rare in the Malays but not in the Indian and Chinese migrant population.7,8 Helicobacter pylori infection among the aboriginal population of Malaysia has not been systematically studied. There are three major tribes of Orang Asli in Peninsular Malaysia, namely Negritos, Senoi, and Proto-Malays.9,10 The Temiar are a major tribal group of the Senoi and are mainly found in the jungles of northeastern Peninsular Malaysia bordering the states of Kelantan and Perak (Figure 1). Forced resettlement by the Malaysian government clustered most Orang Asli in less remote villages along with basic education and healthcare facilities. However, most remain illiterate and their understanding of personal hygiene and sanitation is rudimentary. They inhabit shared longhouses that are overcrowded with many families. One would suspect that these living conditions would foster the spread of HP infections. We report herewith data concerning the prevalence and predictors of HP infection among a subset of asymptomatic Orang Asli population in northeastern Peninsular Malaysia.

We studied Orang Asli living near Kg Kuala Betis in the southern district of Gua Musang in the state of Kelantan in northeastern Peninsular Malaysia. The town of Gua Musang is 180 km south of the capital city Kota Bahru (Figure 1). Kg Kuala Betis is the base for the office of Orang Asli Welfare Department or Jabatan Hal Ehwal Orang Asli (JHEOA). The study location consisted of three Orang Asli settlements/villages or “Pos” situated 10–30 km from Kg Kuala Betis in an area accessible only by four-wheel drive vehicles. The total population of Orang Asli in these blocks was 6,000. Screening took place in 2001 after official clearance from the JHEOA and data collection was completed in 2002. All subjects were > 12 years of age and randomly selected from households in the villages to reach a sample size of 480 subjects. This sample size was calculated using PS software to achieve a power of 80% and precision of 0.05. Because of problems with literacy, verbal informed consent was obtained after explanation of study procedures. Children were recruited only after parental consent was given. The study was reviewed and approved by the Human Ethics Committee of Universiti Sains Malaysia (USM) and supported by a USM short term grant.

We recruited 480 subjects from the three Orang Asli settlements with a mean age of 31 ± 13 years (range 13–87 years). There were almost equal number of males (47.1%) and females. The majority of subjects were born (88.5%) and raised (98.5%) in Kelantan. However, place of birth had no influence on infection rates as shown in Table 1. Many were jungle product collectors (33.5%) and 40.2% received no education or only primary education (58.3%). The subjects lived in large families with 92.3% having more than eight members per family. Government supplied piped water was accessible to only 37.1% of subjects. Most were smokers (61%) but only 7.5% drank alcohol. Out of 480 subjects, 19% tested positive for HP infection using the serology test. Prevalence by birth cohorts is shown in Figure 2. A higher prevalence was observed among birth cohorts in the period between 1940s through 1960s (13/32 subjects or 40.6% in 1940s, 26/75 subjects or 34.7% in 1950s, and 26/116 subjects or 22.4% in 1960s) but fell to below 10% after the 1970s (9/138 subjects or 6.5% in 1970s and 8/102 subjects or 7.8% in 1980s). Importantly, most of those 60 or older in the period between 1910s and 1930s had an HP prevalence of 9/17 or 52.9%. Because they lived through the relocation periods and were exposed to the younger cohorts, it is not possible to know the prerelocation prevalences. Because of differences in key variables from simple logistic regression analysis, we performed multiple logistic regression analysis (forward LR method) with positivity for HP infection as the dependent variable and age, sex, occupation, educational level, number of family members in each household, smoking status, alcohol consumption, herbal plants and roots use, source of water supply, diet of exotic foods and family history of gastric disease as the independent variables (Table 2). Older age (odds ratio [OR] 1.04; 95% confidence interval [CI] = 1.02–1.07), a history of herbal plants and root use (OR 2.11; 95% CI = 1.08–4.16), and a large family size (OR 1.21; 95% CI = 1.01–1.47) were strong predictors of infection (Table 1). Any formal education and use of government piped water source were protective factors against HP infection.

The prevalence of HP infection among Malays in the northeastern region is exceptionally low1–3,12 and of interest. A recent study found the majority of HP strains obtained from the Malays were the same origin as those of immigrant Indians suggesting that infection among Malays was acquired after mixing with immigrant populations.13,14 Helicobacter pylori prevalence in the Orang Asli was high in the birth cohort of the 1940s and declined rapidly in subsequent birth cohorts to less than 10% in those born in the 1970s and 1980s (Figure 2). We speculate the pattern reflected acquisition of the infection during periods of aboriginal contact with outsiders. The period from 1948–1960 saw the forced relocation of the Orang Asli from the interior jungles into less remote resettlement camps as a consequence of the conflict between the British colonial government and communist insurgents.15 They were later relocated to designated villages that initially had poor sanitation and hygiene with water being obtained mainly from rivers with adjacent primitive toilets. Improved provision of clean water and better toilet facilities in the villages from the 1970s onward may partly explain the decline in HP prevalence.16,17 However, the extraordinarily low HP infection rates among 12–30 year olds in a community that remains among the most socioeconomically disadvantaged in the country suggests that there are as yet unknown factors that limit the transmissibility of the bacteria in the area.

Attempts to explore why Orang Asli have a “natural” low prevalence of HP have not identified any specific responsible factor. Of interest, eating exotic rare jungle animals (porcupines and tapirs) appeared to increase the risk of HP infection but it is considered unlikely that the wild animals harbor the infection. It is possible however that shared use of blow pipes made from bamboo to hunt jungle animals or shared food utensils favor HP infection. Herbal plants and roots use appeared to increase the risk of HP infection as did ingestion of alcohol. Both can damage the gastric mucosa but could just as likely be markers for other practices.18 More likely, both practices were associated with shared utensils or other traditional methods of preparation which favor HP infection.

The study limitations include convenience sampling because of the logistic difficulties of communication, transportation, and access to the Orang Asli. However, we made all possible efforts to gather a sample from as many households as possible from the three settlements. In addition, even with the help of an interpreter, complete data acquisition from the questionnaire was not always possible. Even though the serology kit for HP IgG was validated with good sensitivity and specificity, a combination of tests might have improved detection rates. The determination of strain would be extremely helpful but obtaining the tissues for testing was limited by logistic and ethical issues.