(A) Grouped erythematous itchy papular lesions caused by cutaneous ectopic schistosomiasis. (B) Ova of Schistosoma species in the dermis. This figure appears in color at www.ajtmh.org. 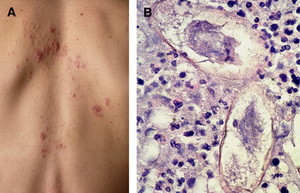 The Potential of Molecular Diagnosis of Cutaneous Ectopic Schistosomiasis

A 28-year-old woman presented with extensive erythematous lesions on her back after visiting Malawi. Skin biopsies showed ova, which could belong to Schistosoma spp. Sequencing of the Schistosoma 28S rRNA gene, extracted and amplified from paraffin biopsies, identified DNA of Schistosoma haematobium. Cutaneous ectopic schistosomiasis can present with extensive lesions and should be considered in the differential diagnosis of skin lesions in returning travelers. Microscopy and serology are the classical methods to obtain a diagnosis. Alternatively, molecular methods can be a valuable new tool for diagnosis and species determination.