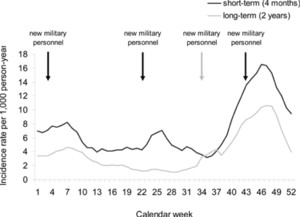 Despite an increase in foreign tourism and in the numbers of foreign military personnel deployed to Djibouti, little is known about the risk of gastrointestinal illness in this country in eastern Africa. To assess risk and to describe common features of gastrointestinal illnesses, reports of illness derived from military health surveillance data collected during 2005–2009 among French service members deployed to Djibouti were reviewed. Diarrhea was the most common problem; it had an annual incidence ranging from 260 to 349 cases per 1,000 person-years. The risk was higher among soldiers deployed short-term (four months) than among soldiers deployed long-term (two years). This five-year review of French health surveillance data documents a significant burden of diarrhea among French soldiers in Djibouti. The identification of factors associated with risk may permit efficient targeting of interventions to reduce morbidity from gastrointestinal illness.