A, Filtration technique. Decontaminated sputum being aspirated through a filter with suction from a syringe. B, Culture technique. Localized (red) color change caused by the 2,3-diphenyl-5-(2-thienyl) tetrazolium chloride indicator in broth cultures indicating growth of tuberculosis colonies. The upper well contains a culture derived from the centrifuge-concentrated aliquot of a decontaminated sputum sample. The lower well contains a filter that had been used to concentrate the other aliquot of the same decontaminated sputum sample. Tuberculosis colonies are visible on and around the filter. 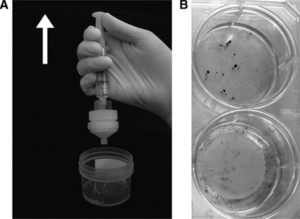 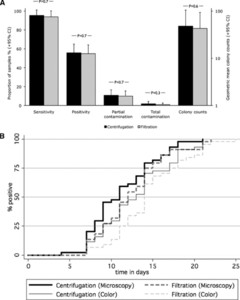 Optimal tuberculosis testing usually involves sputum centrifugation followed by broth culture. However, centrifuges are biohazardous and scarce in the resource-limited settings where most tuberculosis occurs. To optimize tuberculosis testing for these settings, centrifugation of 111 decontaminated sputum samples was compared with syringe-aspiration through polycarbonate membrane-filters that were then cultured in broth. To reduce the workload of repeated microscopic screening of broth cultures for tuberculosis growth, the colorimetric redox indicator 2,3-diphenyl-5-(2-thienyl) tetrazolium chloride was added to the broth, which enabled naked-eye detection of culture positivity. This combination of filtration and colorimetric growth-detection gave similar results to sputum centrifugation followed by culture microscopy regarding mean colony counts (43 versus 48; P = 0.6), contamination rates (0.9% versus 1.8%; P = 0.3), and sensitivity (94% versus 95%; P = 0.7), suggesting equivalency of the two methods. By obviating centrifugation and repeated microscopic screening of cultures, this approach may constitute a more appropriate technology for rapid and sensitive tuberculosis diagnosis in basic laboratories.