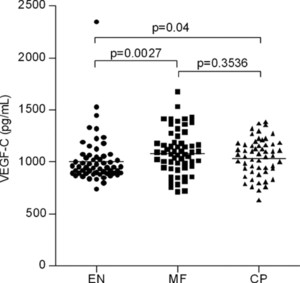 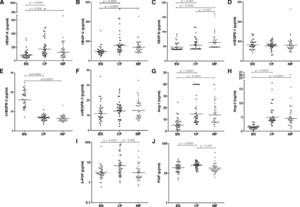 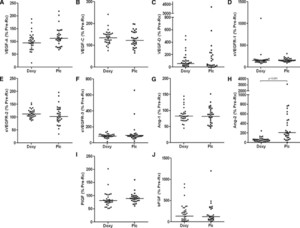 Lymphatic dilatation, dysfunction, and lymphangiogenesis are hallmarks of patent lymphatic filariasis, observed even in those with subclinical microfilaremia, through processes associated, in part, by vascular endothelial growth factors (VEGFs). A panel of pro-angiogenic factors was measured in the plasma of subjects from filaria-endemic regions using multiplexed immunological assays. Compared with endemic normal control subjects, those with both subclinical microfilaremia, and those with longstanding lymphedema had significantly elevated levels of VEGF-A, VEGF-C, VEGF-D, and angiopoeitins (Ang-1/Ang-2), with only levels of basic fibroblast growth factor (bFGF) and placental growth factor (PlGF) being elevated only if lymphedema was evident. Furthermore, levels of these factors 1-year post-treatment with doxycycline were similar to pretreatment levels suggesting a minimal role, if any, for Wolbachia. Our data support the concept that filarial infection per se is associated with elevated levels of most of the known pro-angiogenic factors, with only a few being associated with the serious pathologic consequences associated with Wuchereria bancrofti infection.