Histidine-rich protein 2 of Plasmodium falciparum isolates from Tumaco and Buenaventura, Colombia, at a concentration of 200 parasites/μL with respect to the initial parasitemia of the patient infections. A poor association was found between the two variables (correlation coefficient = 0.503, 95% confidence interval = 0.09–0.77, P = 0.703). Two samples could not be analyzed by an enzyme-linked immunosorbent assay.

A, Association between Plasmodium falciparum histidine-rich protein 2 (HRP2) concentration at a parasite concentration of 200 parasites/µL and rapid diagnostic test (RDT) results for samples from Tumaco and Buenaventura, Colombia. B, Comparison between initial parasitemia and RDT results at a concentration of 200 parasites/µL in samples from both cities. The RDT intensities of samples from both cities showed a correlation with initial HRP2 concentration (P = 0.005), but not with parasite density of the samples. 0 = negative RDT result; 1 = test band intensity weaker than that of the control band; 2 = test band intensity equal to that of the control band. 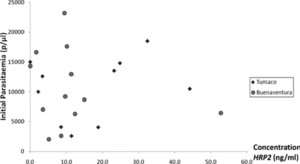 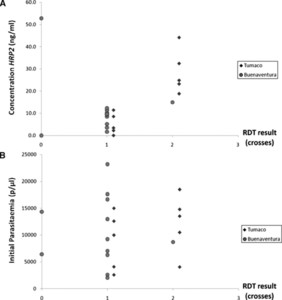 Most rapid diagnostic tests (RDTs) available use histidine-rich protein 2 (HRP2) as a target. However, it has been reported that sequence variations of this protein affects its sensitivity. Currently, there is insufficient evidence for HRP2 variability in Plasmodium falciparum isolates from Colombia and its relationship with RDT performance. To determine possible geographic differences and their effects on the performance of RDTs, 22 blood samples from patients with P. falciparum malaria from Tumaco and Buenaventura, Colombia were assessed by measurement of HRP2 concentration by an HRP2 enzyme-linked immunosorbent assay, RDTs, and thick blood smear. Statistical analysis showed an association between RDT performance and HRP2 concentrations. No significant difference was found between locations. A large variation of antigen concentration in samples was found at same parasitemia. In contrast to previously reports, there was no correlation between initial parasitemia and HRP2 concentration. Our results indicate that antigen quantity should be studied more carefully because the sensitivity of the RDT is affected more by antigen concentration than by parasitemia.