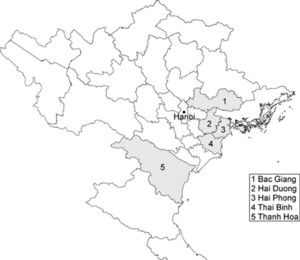 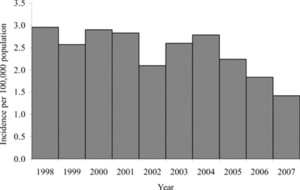 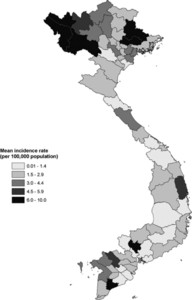 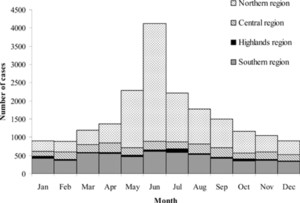 Surveillance for Japanese Encephalitis in Vietnam, 1998–2007

Japanese encephalitis (JE) is recognized as an important public health problem in Vietnam. A JE immunization program was introduced in 1997 in high-risk districts and expanded to additional districts over subsequent years. We reviewed national acute encephalitis syndrome (AES) surveillance data for 1998–2007 and analyzed more detailed data regarding JE from five northern provinces in 2004 and 2005. The annual reported incidence of AES in Vietnam ranged from 3.0 to 1.4 cases per 100,000 population with a decreasing trend over the 10-year period. The mean annual incidence of AES was highest in the northern region of the country. Of 421 AES cases from five northern provinces with laboratory results reported, 217 (52%) had laboratory evidence of recent JEV infection. As Vietnam moves closer to control of JE through immunization, accurate JE surveillance data will be important to evaluate and guide the program.

Japanese encephalitis virus (JEV), a mosquito-borne flavivirus, is found throughout much of Asia. Japanese encephalitis (JE) is a severe disease, with a case-fatality rate as high as 30% and significant neurologic sequelae in 30–50% of survivors.1,2 This disease occurs predominantly in rural areas, where large numbers of mosquitoes breed in rice fields. In Vietnam, JEV was first isolated in 1951.3 Subsequent isolations of JEV from mosquitoes, birds, pigs, and humans in Vietnam and JE epidemics in the late 1960s and 1970s increased awareness of the disease and its impact.4,5 Since that time, JE has been recognized as an important public health problem in Vietnam.6

Acute encephalitis is the most common clinical manifestation of JE.7 In many JE-endemic countries, laboratory testing is not consistently available to differentiate JE from other causes of encephalitis. As a result, in Vietnam and other countries, acute encephalitis syndrome (AES) cases are counted and reported as a surrogate for JE surveillance. From 1985 through 1993, annual AES incidence rates in Vietnam, reported as JE incidence, ranged from 1 to 8 cases per 100,000 population.6 The highest incidence rates were reported from provinces in the Red River delta region in the northern part of the country. Rates were also high in some provinces in the Mekong River delta region in the southern part of the country. Both delta regions are major rice-growing areas. Epidemics have been frequently reported since the 1960s, with reported incidence rates as high as 22 per 100,000 population.3

In 1997, a domestically produced, inactivated mouse brain–derived JE vaccine was introduced into the expanded program on immunization for children 1–5 years of age in 12 high-risk districts in the northern region. The program was subsequently expanded, initially to other high-risk districts in the northern region, in 2001 to selected districts in the central region, and then to other parts of the country. By 2007, JE vaccine was being administered through the national immunization program to children in 437 (65%) of 676 districts in Vietnam. The program is conducted through annual campaigns, with two primary vaccine doses delivered 1–2 weeks apart, and a booster dose is given one year later. Additional children in Vietnam were vaccinated with privately purchased JE vaccine; this was domestically produced or imported inactivated, mouse brain–derived vaccine.

Since the introduction of JE vaccine, there is limited information in the English literature on the incidence of AES in Vietnam or the proportion of AES that is caused by JEV. We report the epidemiology of AES and JE in Vietnam during 1998–2007 based on analysis of available surveillance data.

In the national surveillance system in Vietnam, a case of AES, called viral encephalitis for reporting purposes, is defined as a patient with fever (> 38°C) and change in mental status, abnormal movements, seizure, tremor, or spastic paralysis. A case of JE is defined as a case of AES with IgM against JEV in serum or cerebrospinal fluid. IgM was detected by using the National Institute of Hygiene and Epidemiology (NIHE) in-house JEV enzyme-linked immunosorbent assay (ELISA).

Five provinces in the northern surveillance region (Bac Giang, Hai Duong, Hai Phong, Thai Binh, and Thanh Hoa) collected additional information on AES cases in 2004 and/or 2005 (Figure 1). Case investigation forms were unique to each province, and included some or all of the following variables: patient demographics, onset date, JE vaccination status, JEV IgM ELISA results, and outcome. The JE vaccination status was based on information from a written record when possible.

We reviewed AES surveillance data reported to NIHE for 1998 through 2007, and AES case investigation forms obtained in the five northern provinces in 2004 and 2005. Information was entered and analyzed in Epi Info version 3.3.2 (Centers for Disease Control and Prevention, Atlanta, GA). The Cochrane-Armitage trend test was used to assess whether incidence rates changed significantly over time. Categorical variables were described as proportions and then compared by using the χ2 test.

Prior to 2004, there were 61 provinces in Vietnam: 28 in the northern region, 11 in the central region, 3 in the highlands region, and 19 in the southern region.

Overall, reported AES cases in Vietnam peaked during the summer months. However, this seasonal pattern was primarily seen in the northern region where 7,886 (73%) of 10,797 cases occurred from May through September. In the other three regions, cases were more evenly distributed through the year (Figure 4).

Of the sixty-one (28%) cases with known JE vaccination status, 11 (18%) were age-appropriately vaccinated with two or more doses of JE vaccine. Discharge status was collected consistently only from the patients in Hai Duong Province; 4 (12%) of 33 JE patients died and 8 (28%) of the survivors had significant sequelae.

The reported incidence of encephalitis in Vietnam showed a slightly decreasing trend during the 10 years from 1998 through 2007. In addition, no epidemics occurred, unlike the pattern in the decades prior to vaccine introduction.3,6,8 The northern region of the country continued to demonstrate the highest incidence of encephalitis, as in previous years.6 However, during 1998–2007, the highest province-specific incidence rates for encephalitis occurred in the far northwestern and northeastern areas, in contrast to the pattern reported in the late 1980s and early 1990s when highest rates occurred in the Red River delta area. This change may reflect the impact of the JE immunization program, which had an early focus on districts in this delta area.

A 1995 study found 33 (42%) of 79 AES patients admitted to Bach Mai Hospital in Hanoi during two months of summer had evidence of acute JE infection, including 31 (67%) of 46 children < 18 years of age.9 Among 1,121 AES encephalitis patients admitted to hospitals in Hanoi in 1992–1993, 716 (64%) were JE positive.6 Our findings of 52% JE-positive patients among 421 AES patients, including 55% JE-positive patients among children ≤ 15 years of age, from five provinces of the northern surveillance region in 2004–2005 are similar to these results. However, we found the proportion of JE cases among AES patients varied from 17% (8 of 47) in Bac Giang Province to 71% (76 of 107) in Thai Binh Province. This finding may indicate that a substantial proportion of AES in Vietnam continues to be attributable to JE, but the proportion likely varies from province to province. Information was not available on the timing of sample collection or the number of cases with a sample collected at least 10 days after onset when antibodies are reliably detectable.7 We do not know how any differences between provinces in timing of sample collection may have affected results overall or the differences in case positivity rates between provinces.

In the 10 years after introduction of the JE immunization program, a small decrease in AES incidence occurred. However, for a number of reasons, it is difficult to clearly define the impact of the program. The program is specific for children 1–5 years of age but the national surveillance system does not collect age-related data. Vaccination against JE is instituted on a district-by-district basis, but AES incidence rate by district is not readily available. Changes in AES incidence rates could be attributable to increases or decreases in the incidence of either JE or other causes of AES. If data are aggregated, a decrease in incidence in one area subsequent to vaccination may not be evident if a concurrent increase in incidence occurred in another area. The intensity of JEV transmission varies from year to year, and this variability is difficult to take into account. Finally, knowledge of vaccine coverage is important to understand expected impact; although high coverage rates > 90% are reported in the districts where the national program has been implemented (Yen N.T., unpublished data), the percentage of the population additionally protected through private purchase of vaccine is unknown.

To better understand the epidemiology of JE in Vietnam, surveillance should be enhanced by collection of additional epidemiologic information from cases, and expansion of JE testing. One strategy to achieve this could be case-based investigations at a number of sentinel sites in different regions of the country. Enhanced surveillance and JE testing will also provide data necessary to assess the effectiveness of the JE vaccination program, and determine whether refinements in strategy, such as broadening the target age group for vaccination, are needed. As JE control improves, it will also be important to consider other etiologies of AES, which will increasingly represent a larger proportion of AES cases. Access to testing for other vaccine-preventable or treatable causes of AES will be particularly important.

There are several limitations of this evaluation. First, available data included only AES morbidity and mortality by province at a national level, and JE-specific data from a limited number of provinces. Although there were no evident changes in healthcare access or reporting practices during the surveillance period, any changes could have affected results. Finally, the provinces where laboratory testing was conducted were not a representative sample of all provinces in Vietnam, and the proportion of laboratory-confirmed JE cases among AES cases cannot be extrapolated to estimate the proportion of AES caused by JEV in Vietnam as a whole. Despite these limitations we believe that the data in this report suggest that JE vaccination in Vietnam might be resulting in a trend towards decreased incidence of JE among children.

Because JE is recognized as a serious public health problem in Vietnam, the government plans to expand the JE immunization program nationwide by 2011. Data from the surveillance system have been useful to identify priority areas for vaccine introduction as the program has expanded since 1997. As Vietnam moves closer to control of JE, a strengthened surveillance system will be important to carefully evaluate and guide the control program.