Decision-making: the individual and the community. The major effect of the communal nature of decision-making on informed consent in developing countries is the need to address the community as a whole—diagrammed here as additional discussions with the chief, village elders, and men's and women's councils before meeting with potential participants.

Informed consent and written documentation. Illiterate participants are at risk of misunderstanding from inadvertent changes in meaning during translation of consent documents by study staff. Note that the participant's understanding of the study is rarely assessed in either developed or developing countries. 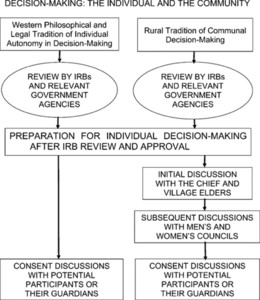 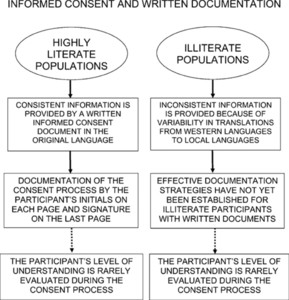 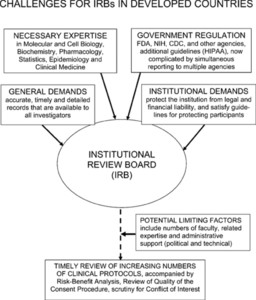 Informed Consent in International Research: The Rationale for Different Approaches

In developed countries, informed consent is based on the autonomy of the individual, a written description of the studies proposed, and previous experience of the participant with Western medicine. Consent is documented by the signature of the participant and supervised by institutional review boards (IRBs), which have conflicts of interest because they are also responsible for limiting institutional liability. In developing countries, the initial decision-making for informed consent is typically vested in the community rather than the individual, and illiteracy is common—limiting the value of written documents and signatures. The challenges in developing countries are exacerbated by the fact that persons at greatest risk of disease are often illiterate, have limited experience with Western medicine, and have limited understanding of the scientific rationale for the studies proposed. Given these differences, it is unrealistic to expect that consent strategies used in developed countries would be effective in such diverse settings.