Daily individual mobility pattern for a randomly selected resident of Iquitos, Peru, tracked with a global positioning system for a 15-day period during September–October 2008. 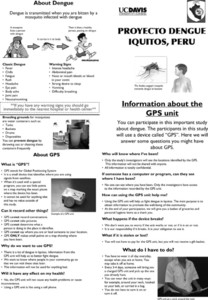 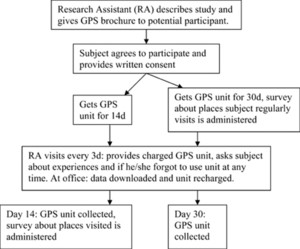 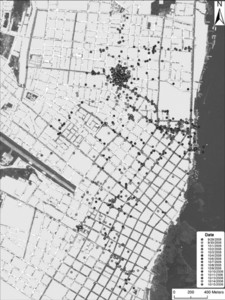 Assessing and Maximizing the Acceptability of Global Positioning System Device Use for Studying the Role of Human Movement in Dengue Virus Transmission in Iquitos, Peru

As use of global positioning system (GPS) technology to study disease transmission increases, it is important to assess possible barriers to its use from the perspective of potential study participants. Fifteen focus group discussions stratified by sex, age, and motherhood status were conducted in 2008 in Iquitos, Peru. All participants said they would accept using a GPS unit for study purposes for 2–4 weeks. Participants' main concerns included caring properly for the unit, whether the unit would audio/videotape them, health effects of prolonged use, responsibility for units, and confidentiality of information. A pilot study was then conducted in which 126 persons were asked to carry GPS units for 2–4 weeks; 98% provided consent. All persons used the units expressing minimal concerns, although 44% reported forgetting the device at least once. Our study is the first to highlight participant concerns related to use of GPS for long-term monitoring of individual behavior in a resource-limited setting.