Map of China showing the locations where mosquitoes and sera were collected in Qinghai (1: Geermu city; 2: Xining city; 3: Minhe county). The dark brown area in ellipse represents the major region of the Qinghai-Tibet Plateau. This figure appears in color at www.ajtmh.org.

Phylogenetic analysis of TAHV QH07029 and QH07060 isolated from Qinghai, China based on the nucleotide sequence of S segment. 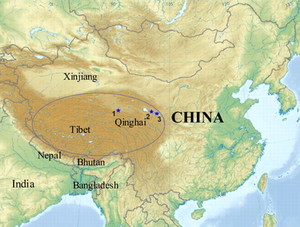 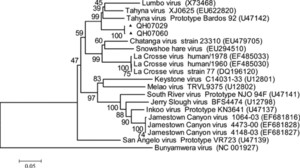 Mosquitoes and Mosquito-Borne Arboviruses in the Qinghai-Tibet Plateau—Focused on the Qinghai Area, China

An investigation was conducted to identify the distribution of mosquitoes and mosquito-borne arboviruses in the Qinghai-Tibet Plateau, China from July to August in 2007. A total of 8,147 mosquitoes representing six species from three genera (Aedes, Culex, and Anopheles) were collected in three locations (Geermu city, altitude of 2,780 m; Xining city, 2,200 m; Minhe county, 1,700 m). Six virus isolates were obtained including Tahyna virus (TAHV), Liaoning virus, and Culex pipiens pallens Densovirus. A serosurvey showed immunoglobulin G antibodies by immunofluorescence assay (IFA) against TAHV in residents of all three locations. The IFA-positive human samples were confirmed by 90% plaque-reduction neutralization tests (PRNT90) against TAHV with titers ranging from 1:20 to 1:10,240. In addition, TAHV seropositive cows, sheep, and swine were found in these locations. This investigation represents the first isolation of TAHV from Ae. (Och.) detritus and the first evidence of TAHV infection in residents and livestock in the Qinghai-Tibet Plateau.