Purpuric rash on lower extremities of the patient, which affected the soles of her feet. This figure appears in color at www.ajtmh.org.

Tache noire on the right leg of the patient. This figure appears in color at www.ajtmh.org. 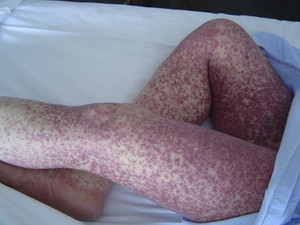 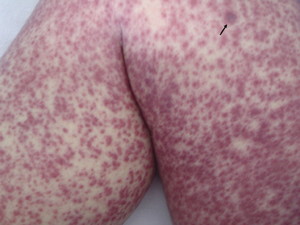 A Patient from Argentina Infected with Rickettsia massiliae

Search for other papers by Begoña Castro in
Current site
Google Scholar
PubMedClose
, and
José A. Oteo
José A. Oteo

Search for other papers by José A. Oteo in
Current site
Google Scholar
PubMedClose

The first confirmed case of Rickettsia massiliae infection in the New World (Buenos Aires, Argentina) is described. To date, only two cases of human infection had been reported in Europe. The patient, a woman, had a fever, a palpable purpuric rash on the upper and lower extremities, and a skin lesion (eschar) on the right leg compatible with tache noire. When interviewed, she reported having had contact with dog ticks. After treatment with doxycycline for 12 days, her symptoms resolved. Rickettsia massiliae infection was diagnosed by molecular-based detection of the microorganism in a biopsy specimen of the eschar.

Rickettsia massiliae is a spotted fever group Rickettsia broadly distributed around the world and is associated with Rhipicephalus ticks.1–4 Its pathogenic role was suspected because its seroprevalence in humans was observed, and some authors reported that this Rickettsia could be the causative agent of some cases of Mediterranean spotted fever (MSF).5 To date, only two human cases of R. massiliae infection in Europe have been documented and confirmed with molecular methods. The first case was detected in a blood sample from a patient diagnosed with MSF in Italy; the blood sample had been stored for 20 years before the case was detected.6 The second case was in a patient with spotted fever and acute loss of vision in southern France.7

On July 1, 2005, a 56-year-old woman living in Buenos Aires, Argentina, was admitted to the emergency department of a hospital in Villagarcía de Arosa, Galicia, Spain, because of fever, chills, and malaise for 72 hours and a rash that was present for a few hours. The patient had arrived in Spain 48 hours earlier on a flight from Argentina. She had a history of convulsions related to arterio-venous malformation in the frontal brain area and was treated with phenobarbital. She had a fever (40°C) and a palpable purpuric rash all over the trunk and on the upper and lower extremities with the palms and soles affected (Figure 1).

Hemocultures were prepared and treatment was initiated with amoxicillin-clavulanic acid and an infusion of amikacin. An allergic reaction was suspected, phenobarbital was discontinued, and gabapentin treatment was initiated. Laboratory evaluation showed a leukocyte count of 1.83 × 104 cells/µL with 18% immature forms, a prothrombin ratio of 73%, an aspartate aminotransferase level of 111 IU/L, an alanine aminotransferase level of 449 IU/L, a gamma-glutamyl transpeptidase level of 1,102 IU/L, an alkaline phosphatase level of 546 U/L, and a lactate dehydrogenase level of 1,132 U/L. The patient reported the next day that she removed ticks from her dog one week earlier and found several engorged ticks in her garden. Doxycycline (100 mg every 12 hours) was then administered.

The same day, a skin lesion on the right leg compatible with tache noire was observed (Figure 2). The patient had a torpid course and a pleural effusion was developed. Treatment with prednisone was prescribed. A biopsy specimen was obtained from the lesion (eschar). On day 12, the patient was afebrile and recovered. Blood cultures and results of serologic testing for hepatitis A, B, and C viruses, Epstein-Barr virus, cytomegalovirus, Rickettsia conorii, Coxiella burnetti, Borrellia burgdorferi, and human immunodeficiency virus (performed with a serum sample obtained the day after her admission to hospital) were negative. The absence of antibodies against R. conorii could have been the result of the antibiotic treatment, which may have reduced the antibody response.

The biopsy sample of the eschar was sent to the Department of Infectious Diseases at the Hospital San Pedro–Centro de Investigación Biomédica de La Rioja in La Rioja, Spain, because rickettsiosis was suspected. DNA was extracted from the biopsy specimen by using QIAamp Tissue Kit (Qiagen, Hilden, Germany). Presumptive diagnosis of rickettsiosis was confirmed by nested polymerase chain reaction (PCR) assays that amplified fragments of the citrate synthase (gltA) and outer membrane protein (ompB) rickettsial genes (Table 1).8,9 Negative controls (one with template DNA but without primers and the other with primers and water instead of template DNA) and a positive control (DNA from R. conorii strain Malish #7) were included in all PCR assays. To minimize the potential for DNA contamination, three separate, designated areas were used for extraction of DNA and preparation of PCRs. Amplicons of the expected size were subjected to sequence determination. The nucleotide sequences obtained were found to share > 99% similarity with the corresponding gltA and ompB fragments of R. massiliae.

We report the third case of human R. massiliae infection and the first acquired in the New World (Argentina). Until recently, this Rickettsia species was not known to be distributed in the Americas,4 and only two demonstrated human cases had been reported in Europe.6,7 The potential role of this Rickettsia (strain Bar-29) as a human pathogen had also been suggested on the basis of the presence of antibodies against this organism in humans.5,10 However, spotted fever group rickettsiae can cross-react, and definitive identification of the agent that stimulated the antibodies is problematic because it relies on the assumptions that all species in a region are known and that the quality of the antigens used for each species is ideal.

Our findings extend the role of R. massiliae as an etiologic agent of tick-borne spotted fever rickettsiosis in the New World, where it had been previously detected in R. sanguineus, a tick species widely distributed around the world.