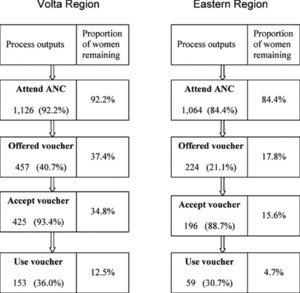 Delivery system evaluation is poorly defined and therefore a barrier to achieving increased coverage of interventions. We use a pre- and post-implementation cross-sectional observational study with assessment of the intermediate processes to evaluate a new delivery system for insecticide-treated nets (ITNs) in two regions of Ghana. In Volta Region, ownership of at least one net rose from 38.3% to 45.4% (P = 0.06), and 6.5% of respondents used a voucher in the purchase. In Eastern Region, ownership of a net rose from 13.7% to 26.0% (P < 0.001) and 0.5% of households used a voucher to purchase a net. Just 40.7% and 21.1% of eligible antenatal clinic (ANC) attendees were offered a voucher in Volta and Eastern Regions, respectively, and 36.0% and 30.7% used their voucher in the purchase of an ITN. Without attributing nets to the specific delivery system, in Eastern Region the success of the new system would be overestimated.