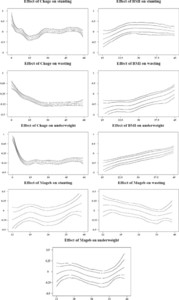 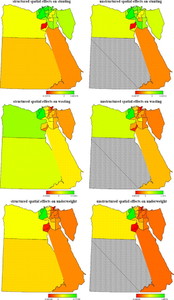 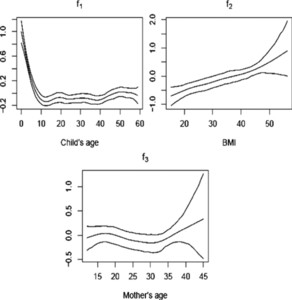 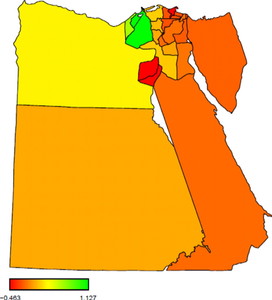 Major progress has been made over the last 30 years in reducing the prevalence of malnutrition amongst children less than 5 years of age in developing countries. However, approximately 27% of children under the age of 5 in these countries are still malnourished. This work focuses on the childhood malnutrition in one of the biggest developing countries, Egypt. This study examined the association between bio-demographic and socioeconomic determinants and the malnutrition problem in children less than 5 years of age using the 2003 Demographic and Health survey data for Egypt. In the first step, we use separate geoadditive Gaussian models with the continuous response variables stunting (height-for-age), underweight (weight-for-age), and wasting (weight-for-height) as indicators of nutritional status in our case study. In a second step, based on the results of the first step, we apply the geoadditive Gaussian latent variable model for continuous indicators in which the 3 measurements of the malnutrition status of children are assumed as indicators for the latent variable “nutritional status”.