Prevalence (±95% confidence interval) of Cryptosporidium infection in children in Nigeria at four time points over a one-year period. A, All samples collected. B, Samples from 349 children that were tested at each of the four time points.

Phylogenetic analysis of A, Cryptosporidium hominis and B, C. parvum subtypes from children in Nigeria and sequences (with accession numbers) previously deposited in GenBank by using neighbor-joining analysis of the glycoprotein (GP60) gene. Values on branches are percentage bootstraps values using 1,000 replicates. Bootstrap values greater than 50% are shown. 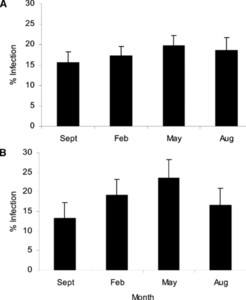 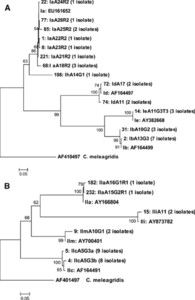