Tongue of the patient before (A and B) and after (C and D) treatment with liposomal amphotericin B. This figure appears in color at www.ajtmh.org.

Histopathologic analysis of a Giemsa-stained punch biopsy specimen from the tongue of the patient, showing A, granulomatous changes and B, numerous leishman donovan bodies within macrophages. C, A subsequent polymerase chain reaction confirmed the presence of Leishmania donovani complex DNA. This figure appears in color at www.ajtmh.org. 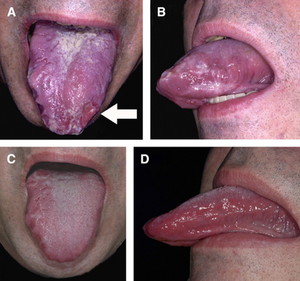 Leishmaniasis in the Tongue of an Immunocompetent Man

A 49-year-old immunocompetent white man had a painful ulcer (1.5 cm in diameter) on the left ventrolateral surface of a grossly enlarged tongue. The ulcer was present for two months. Impaired swallowing resulted in substantial weight loss and fatigue. Histopathologic analysis of a punch biopsy specimen indicated numerous Leishman Donovan bodies within macrophages. A polymerase chain reaction confirmed the presence of L. donovani. Therapy with two cycles of liposomal amphotericin B over a three-month period was administered. Four months after discharge, the ulcer had healed completely and the tongue returned to its normal size and function.

Leishmaniasis directly affects 1.5–2 million patients per year, and more than 350 million persons are at risk worldwide for contracting this disease.1 It is a vector-borne disease caused by Leishmania, obligate intramacrophage protozoa. Human infection occurs through the bite of female phlebotomine sand flies. Non-vector transmission is possible, but is rarely reported. Leishmaniasis is classified into cutaneous, mucocutaneuous, and visceral (kala-azar) forms and shows a wide spectrum of clinical manifestations.2 Oral involvement is unusual and typically appears as mucosal ulcerations, mainly in the nasopharyngeal region.3

A 49-year-old white man was admitted to the Medical University of Vienna Hospital for the evaluation of a painful ulcer in a grossly enlarged tongue (Figure 1A and B). The ulcer was present for two months. He reported a burning sensation, accompanied by the development of a small vesicle, which resulted in the persistent ulcer. Because of difficulties in swallowing, the patient had substantial weight loss and fatigue.

Clinical examination diagnosed an ulcer 1.5 cm in diameter on the left ventrolateral surface of the tongue. Mandibular lymph nodes on the left side were enlarged, non-tender, and relocatable. Clinical differential diagnosis included malignomas, eosinophilic granuloma, primary syphilis, infection with herpes zoster, and tuberculosis.

Routine laboratory investigations show negative results for infection with human immunodeficiency virus and elevated levels of cholesterol (225 mg/dL), gamma-glutamyl transferase (102 U/L), aspartate aminotransferase (42 U/L), and alanine aminotransferase (105 U/L). Ultrasonic testing of the abdomen showed slight signs of steatosis hepatis. A computed tomography scan of the paranasal sinuses did not show any pathologic changes except for chronic inflammations in the area of four teeth. Fibrotic changes in the mediastinum, with a single enlarged pre-aortal lymph node and numerous minimally increased mediastinal lymph nodes were illustrated by a computed tomography scan of the lungs and mediastinum. T2-weighted magnetic resonance imaging of the mouth and tongue indicated residual hyperintensities of the tip of the tongue, which extended ventrally to the left side.

Treatment with parenteral application of liposomal amphotericin B (3 mg/kg/day) for 5 consecutive days was initiated. The medication was well tolerated and the patient did not have any discernible adverse reactions. Three months after therapy, his tongue was still swollen and had a palpable nodular infiltrate. Therefore, a second treatment cycle with liposomal amphotericin B (3 mg/kg/day) for 5 days was initiated. Four months later, his tongue returned to its normal size and shape (Figure 1C and D).

Leishmaniasis in humans is a diverse and complex disease. It is divided into three major clinical types: cutaneous, mucocutaneous, and visceral. There are approximately 24 infective Leishmania spp. Each species can produce more than one clinical form of the disease, and each form of the disease can be caused by multiple species.4 Mucosal involvement in leishmaniasis caused by L. donovani is uncommon and results from hematogenous or lymphatic dissemination of amastigotes from the skin to the nasopharyngeal mucosa.3 Such metastatic spread occurs more often with species belonging to the subgenus L. viannia of New World Leishmania. These parasites are localized in tropical forests of Central and South America. They usually affect the upper respiratory tract and show a predilection for the nose and larynx, often after an initial cutaneous lesion, which was not found in our patient.

Leishmaniasis of the tongue is a rare occurrence and is usually observed in immunodeficient patients. To our knowledge, there have been only two reported cases of lingual leishmaniasis, one in an immunocompetent man from Iran.5,6 Cutaneous leishmaniasis caused by Old World parasites may be manifested as nodular or ulcerating skin lesions, depending on the age of the lesions and the response of the host. Leishmania major and L. tropica cause most of these cases. Mucosal involvement is rare.

At the time of onset of the disease, our patient was healthy and had no signs of immunodeficiency or any previous infections. Confirmation of infection with L. donovani by polymerase chain reaction is an unusual finding because L. donovani usually causes a visceral form of leishmaniasis. The liver test results for our patient may have indicated visceral disease caused by L. donovani. However, an alternative explanation for these findings was a family history of hypercholesterolemia and recreational drinking.

This rare case of lingual leishmaniasis caused by L. donovani proves that a strict separation of different types of leishmaniasis and the species that cause them is not always possible or appropriate for diagnosis. This conclusion is supported by several observations, such as a patient in India, where L. donovani was reported as the cause of mucocutaneous and cutaneous leishmaniasis.7,8

Tourism has resulted in increased reports of leishmaniasis in non-endemic areas such as northern Europe and North America. The areas endemic for L. donovani (the Mediterranean, South America, eastern Africa, and central and southeast Asia) are contingent with the travel history of our patient. The island of Rab, which is a frequent tourist attraction, is situated at the northern border of Dalmatia, a region on the eastern coast of the Adriatic Sea.9 Therefore, we emphasize that specific guidelines should be provided for leishmaniasis-endemic areas to ensure that travelers are aware of prevention methods, clinical manifestations, and the necessity for early diagnosis and timely treatment.