Proportions of patients with gastrointestinal symptoms during primaquine monotherapy for P. vivax malaria.

Proportions of adult patients with recurrent P. vivax parasitemia in the 30 mg/day and 60 mg/day primaquine groups.

Recurrences following acute Plasmodium vivax malaria in adults studied in Thailand in a hospital setting for 28 days where reinfection was excluded. The horizontal axis shows the number of days for which primaquine was given. The open circles and bars represent the proportion and its 95% confidence interval of recurrences in patients who also received artesunate for 5 or 7 days, which has no hypnozoitocidal activity but is highly effective against the blood stage infection, together with primaquine at a daily adult dose of 30 mg (base).7,8 These recurrences are therefore assumed to be relapses. The grey circle shows the recurrences in adults receiving artesunate and primaquine 60 mg daily (7 days).7 The black diamonds are the results of the present study in which primaquine was given alone. The difference between the primaquine 30 mg/day with and without artesunate reflects recrudescences (A; arrowed) and that between primaquine 30 mg/day with artesunate and the primaquine 60 mg/day regimens presumably reflects relapses (B; arrowed). See Supplemental Appendix. (Raw data compiled from the present study and references7,8). 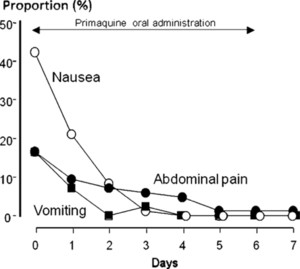 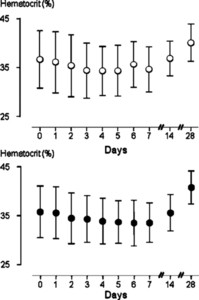 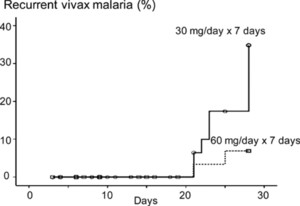 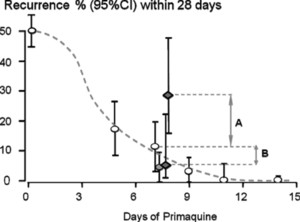 Thai adult males (N = 85) with acute Plasmodium vivax malaria and normal glucose-6-phosphate dehydrogenase screening were randomized to receive 30 mg or 60 mg primaquine daily for 7 days (N = 43 and 42, respectively). The regimens were well tolerated and all patients recovered fully. Median fever clearance (47 hours; range 4 to 130 hours), mean ± SD parasite clearance times (87.7 ± 25.3 hours), gametocyte clearance, and adverse effects were similar in the 2 groups. Two patients, 1 from each group, had a 30% reduction in hematocrit. The cumulative 28 day relapse rate (95% confidence interval) by Kaplan Meier survival analysis was 29% (16–49%) in the 30 mg group compared with 7% (2–24%) in the 60 mg group; P = 0.027. Comparison with previous data obtained at this same site suggests that the recurrences comprised approximately 17% recrudescences and 12% relapses in the 30 mg/day group compared with 3% recrudescences and 4% relapses in the 60 mg/day group. These data suggest that the dose-response relationships for primaquine's asexual stage and hypnozoitocidal activities in-vivo are different. A 1 week course of primaquine 60 mg daily is an effective treatment of vivax malaria in this region.