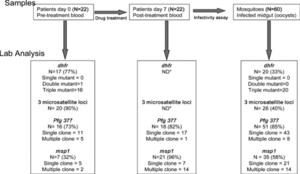 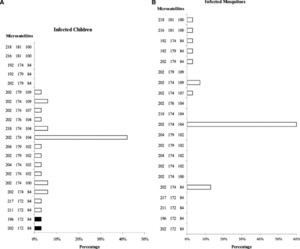 A high-level pyrimethamine resistance Plasmodium falciparum lineage with triple dihydrofolate reductase (dhfr) mutations prevails across Africa. However, additional minority lineages were seen. We examined transmission success of mutant dhfr haplotypes among 22 children in The Gambia and 60 infected Anopheles gambiae mosquitoes fed on their blood. Additional polymorphic genes of the gametocyte-specific protein (pfg377) and merozoite surface protein-1 (MSP-1) were examined. Similarities were seen between pfg377 and MSP-1 alleles in children and mosquitoes and evidence of cross-mating between different parasite genotypes was seen in some infected mosquitoes, reflecting high transmission success of existing clones. With regard to dhfr, 16 haplotypes were seen among the children: 2 carried double mutations and 14 carried triple mutations. However, only nine haplotypes, all with triple mutations, were detected among mosquitoes. A single triple-mutant dhfr haplotype, similar to that in other countries in Africa, predominated among children (42%) and mosquitoes (60%), supporting the hypothesis of migration of this haplotype across Africa. However, evidence of cross-mating between the above haplotypes signifies the role of local evolution.