Summary of final treatment outcome based on msp2, msp1, and TA81 genotyping. Follow-up bleed (FUB). * Genotyping of the microsatellite TA81 was only performed for infections occurring within 28 days after Coartem treatment. Samples collected between Day 28 and Day 42 after treatment was genotyped only for msp2 and msp1. 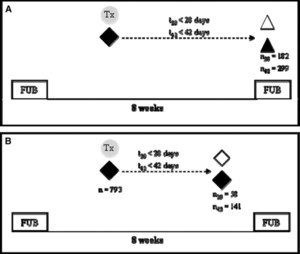 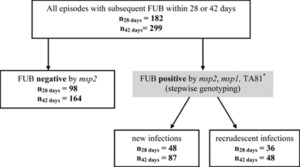 A recent drug efficacy trial reported Coartem (artemether-lumefantrine) to be highly effective against Plasmodium falciparum in children less than 5 years of age in Papua New Guinea (PNG). In contrast, we have observed high levels of treatment failures in non-trial conditions in a longitudinal cohort study in the same age group in PNG. Recrudescences were confirmed by genotyping of three different marker genes to provide optimal discrimination power between parasite clones. After excluding genetic host factors by genotyping potentially relevant cytochrome P450 loci, the high number of treatment failures in our study is best explained by poor adherence to complex dosing regimens in combination with insufficient fat supplementation, which are both crucial parameters for the outcome of Coartem treatment. In contrast to the situation in classic drug trials with ideal treatment conditions, our field survey highlights potential problems with unsupervised usage of Coartem in routine clinical practice and under program conditions.