AKI in patients with VL (kala-azar).

Use of amphotericin B and outcome in patients with VL. 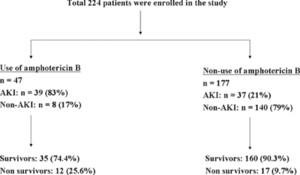 The aim of this study was to investigate the factors associated with acute kidney injury (AKI) in patients with visceral leishmaniasis (VL). The study patients had a diagnosis of VL and were admitted to a tertiary hospital. A multivariate analysis was performed to analyze the risk factors for AKI. A total of 224 patients were included. The mean age was 36 ± 15 years. AKI was observed in 33.9% of cases. Risk factors associated with AKI were male gender (odds ratio [OR] = 2.2; P = 0.03), advanced age (OR = 1.05; P < 0.001), and jaundice (OR = 2.9; P = 0.002). There was an association between amphotericin B use and AKI (OR = 18.4; P < 0.0001), whereas glucantime use was associated with lower incidence of AKI compared with amphotericin B use (OR = 0.05; P < 0.0001). Mortality was 13.3%, and it was higher in AKI patients (30.2%). Therefore, factors associated with AKI were male gender, advanced age, and jaundice. Amphotericin B was an important cause of AKI in VL.

Visceral leishmaniasis (VL) is an endemic disease in tropical and subtropicals countries, as well as in southern Europe, affecting 1–2 million individuals and causing ~500,000 new cases and 5,000 deaths each year.1–4 It is a vector-borne disease caused by different species of Leishmania parasites.1,5,6 As a consequence of the intense parasitism of the reticular endothelial system, kala-azar patients present with marked anemia, leukopenia, and thrombocytopenia, as well as increased plasmatic levels of gamma globulins.7

Renal abnormalities caused by Leishmania have been well-documented in experimental animal studies and are comprised of interstitial and glomerular abnormalities.7 There have been few human studies on renal function in VL. The main pathophysiological mechanism by which VL affects the kidneys probably includes immune-complex disease, which is similar to other parasitic infections such as malaria and schistosomiasis. Most patients present proliferative glomerulonephritis and interstitial nephritis.7 Studies on acute kidney injury (AKI) in VL are rare. Possible causes for AKI in VL include drug toxicity, associated infections, hemodynamic abnormalities, and VL itself.8–12

The aim of this study was to investigate the prevalence, clinical manifestations, and risk factors associated with AKI in patients with VL.

The study was carried out from December 2002 to December 2008 and included patients with a clinical and laboratory diagnosis of VL admitted to São José Hospital of Infectious Diseases in the city of Fortaleza, state of Ceara, Brazil. All patients had the diagnosis of VL based on the identification of amastigotes in smears obtained from sternal bone-marrow aspirate, and some patients underwent rK39 antigen tests during active infection. A standardized case-investigation form was used to complete demographical, epidemiological, clinical, and laboratory data. Patients with age ≤ 14 years, previous renal insufficiency, arterial hypertension, diabetes mellitus, and co-morbidities that could affect renal function during the study were excluded.

The population was divided in two groups: patients with normal renal function (non-AKI) and patients with AKI; these groups were defined according to creatinine levels by applying the RIFLE (risk, injury, failure, loss, end-stage renal disease) criteria13 and were established during hospital stay. We compared these two groups to investigate the differences in clinical manifestations, laboratory features, and risk factors for AKI.

Patients with VL were treated with intravenous injections of pentavalent antimonials (Glucantime; Sanofi-Aventis, São Paulo, Brazil) 20 mg/kg daily for 20–40 consecutive days, and in severe cases, amphotericin B was given at a 7–20 mg/kg total dose for up to 20 days. None of the patients included in the study received the lipid formulation of amphotericin B. Patients with secondary bacterial infections received antibiotic therapy.

The study was approved by the Ethics Committee of São José Hospital of Infectious Diseases.

The results and means ± standard deviations for quantitative variables are presented in Tables 1–4. The univariate and multivariate analyses of the clinical and laboratory data were performed using the SPSS package version 10.0 (SPSS Inc., Chicago, IL) and Epi Info version 6.04b (Centers for Disease Control and Prevention, Atlanta, GA) software. Comparison of parameters of the two groups (AKI and non-AKI) was carried out through Student's t test and Fisher's exact test. A logistic regression model was used for the quantitative variables. Adjusted odds ratios (ORs) and 95% confidence intervals (CIs) were calculated. A multivariate logistic regression analysis was performed to assess the possible risk factors for AKI. The factors included in the multivariate model were those that showed a significance level < 20% at the univariate analysis (Mann–Whitney test and χ2 test). P values < 0.05 were considered statistically significant.

AKI was observed in 76 patients (33.9%), and 85.5% of these patients were males. Of the 76 patients who developed AKI, 26 (34.2%) had serum creatinine > 1.4 mg/dL at admission, 39 patients (51.3%) developed AKI within a mean time period of 10 days after the start of treatment with amphotericin B, 7 (9.2%) developed AKI after the start of treatment with glucantime and 4 (5.3%) developed AKI because of co-morbidities as summarized in Figure 1. Oliguria was observed in 6.5% of patients with AKI. The comparison between AKI and non-AKI patients is summarized in Tables 1 and 2. AKI patients presented higher levels of urea, creatinine, potassium, direct bilirubins, and indirect bilirubins, as well as a higher number of WBCs. Sodium, HCO3, pCO2, albumin levels, platelets count, and prothrombin time were lower in AKI compared with non-AKI patients. The factors associated with AKI were male gender, advanced age, jaundice, and use of amphotericin B, and these results are summarized in Table 3.

The second choice of treatment for severe VL is amphotericin B, a nephrotoxic drug. We observed a significant association between the use of amphotericin B and AKI (P < 0.0001) in patients with the severe form of VL that did not respond to glucantime. AKI was observed in 39 patients using amphotericin B (82.9% of the patients receiving the drug, which corresponds to 17.4% of all studied patients). The percentage of patients that received glucantime and had AKI was 20.9%. All patients in the AKI group treated with amphotericin B had normal serum creatinine levels at admission. The use of glucantime was associated with a lower incidence of AKI (P < 0.0001) as shown in Table 4.

Human VL is an endemic parasitic infection in Brazil that has reemerged, especially in peri-urban areas. Renal involvement is considered rare, presenting as hematuria, proteinuria, or renal-function impairment.2 There is little information on AKI in VL. A prospective study showed renal impairment in only 1 of 11 patients (11%) when considering serum creatinine (Scr) levels > 1.4 mg/dL.7 The present study found a higher incidence of AKI (33.9%) in patients with a confirmed diagnosis of VL.

In a recent study carried out by our group, AKI (considered as serum creatinine levels higher than 1.3 mg/dL) was found in 26.2% of 57 patients with VL.9 Lima Verde and others14 in a cross-sectional study of 50 consecutive patients with visceral leishmaniasis, also carried out in our region, found a decreased glomerular filtration rate in 28% of the cases; this rate was attributed to fluid loss, volume contraction, and immunologic glomerular disease.

In the present study, AKI was more frequent in male patients, and this is in accordance with previous studies.15 The analysis of signs and symptoms showed that dyspnea, edema, jaundice, and oliguria were more frequent in patients with AKI. The laboratory evaluation showed higher levels of urea, creatinine, potassium, direct bilirubins, and indirect bilirubins, as well as a higher WBC count in AKI patients. Sodium and albumin levels, platelet count, and prothrombin time were lower in AKI patients, showing higher disease severity in patients with AKI. HCO3 and pCO2 levels were also lower in patients with AKI, suggesting a high incidence of metabolic acidosis, which could be secondary to renal dysfunction. Decreased titratable acidity was observed in 64% of patients with VL in a recent study in our region, as well as decreased ammonia urinary excretion in 30% of cases. Complete distal renal-tubular acidosis was observed in 30% of patients, and an incomplete form was found in 34%.14 In a recent prospective study including 55 patients with VL, hypoalbuminemia, hypergammaglobulinemia, and increased serum levels of IgG and β2-microglobulins were found in all patients.16 Increased albumin excretion was found in 44% of cases, and β2-microglobulin excretion was elevated in all cases. Other important abnormalities observed were hyponatremia (94.6%), hypomagnesemia (41.8%), hypocalcemia (32%), hypokalemia (26%), hypochloremia (27.2%), and hypouricemia (14.3%).16

Hematuria was seen in 4.5% of cases, even in patients without AKI, suggesting a possible glomerular involvement. Urinary-sediment alterations and decreased renal function have been described in patients with VL.17,18 In a prospective study of 50 patients with VL, urinary-sediment alterations with hematuria and leukocyturia were found in 51% of the studied cases. Slightly increased urinary-protein excretion was observed in 24-hour urine samples from 57.1% of these patients. A high percentage of urinary abnormalities, including macroscopic hematuria (45.4%), proteinuria (90.9%), and leukocyturia (54.5%), were observed in a prospective study of 11 patients with VL from Brazil.7 Mesangial deposits, mesangial cell hyperplasia, and glomerular endothelial cell tumefaction have been found in histopathological studies of patients with VL and in dogs that were naturally infected.19,20 All patients submitted to autopsy presented mononuclear interstitial nephritis, edema, and focal tubular degeneration.21 Acute glomerulonephritis, nephrotic syndrome, acute interstitial nephritis, and renal failure have also been described in VL.22–26

In the present study, the use of amphotericin B was an important risk factor for AKI in VL, and it was associated with an 18-fold increased risk of developing AKI. In a recent study with 48 patients receiving amphotericin B, AKI (defined as an increase of > 50% in basal creatinine levels) occurred in 31% of cases.27 Higher incidences of AKI secondary to the use of amphotericin B have been reported, with percentages as high as 80% of patients receiving this drug.28 In the present study, AKI developed in a high number of patients receiving amphotericin B (82.9%). Moreover, amphotericin B was also associated with a higher mortality rate, with 3-fold increased risk of death. AKI was significantly less frequent among patients using glucantime. Since 1940, the pentavalent antimony compounds sodium stibogluconate and meglumine antimoniate (glucantime) have been the mainstays of antileishmanial therapy.1,4,29 In the present study, meglumine antimoniate was the first-choice treatment used in > 88% of cases. New therapeutic options, including oral drugs such as miltefosine, are being considered, as shown in recent studies.3,29

In the present study, overall mortality was 13.3%, and it was significantly higher in AKI patients (30.2% versus 4.7%). There have been few studies on mortality in VL. In a previous study by our study group, the mortality rate was lower (5.2% of 57 study patients), and all deaths were associated with AKI.9 A study of prognostic factors conducted in Northeastern Brazil verified that severe anemia, fever lasting > 60 days, diarrhea, and jaundice were risk factors for death in VL.30 In the present study, the risk factors for mortality were amphotericin B use, oliguria, jaundice, and dyspnea. Mortality was also higher among patients using amphotericin B (25.6% versus 9.7%), and this could be caused by the higher severity of the disease in patients who required the use of amphotericin B (VL-associated resistant infection or VL-associated severe leukopenia and sepsis).

In conclusion, AKI is an important complication in VL that seems to increase mortality. The predictive factors associated with AKI were male gender, advanced age, and jaundice. Amphotericin B is an important cause of AKI in VL, showing that nephrotoxicity plays an important role in the pathogenesis of AKI in this disease. Mortality was higher in AKI patients.