Fluorescein angiography. (A and B) No abnormal lesions were noted except blocked fluorescence in both eyes caused by retinal hemorrhages.

Spectral domain optical coherence tomography. (A) The locations of the hemorrhages were found to exist at the level of the intraretinal space, and no other subretinal hemorrhage or fluid collection was found. (B and C) A week later, the retinal hemorrhage was slightly decreased in size, but the patient's BCVA was not improved. (D and E) Four weeks after the onset of ocular symptoms, the retinal hemorrhage at the fovea was much decreased in size, but visual acuity had only improved to 20/40 because of the remaining lesion. This figure appears in color at www.ajtmh.org.

Fundus photographs 4 weeks after the onset of ocular symptoms. (A and B) The retinal hemorrhage at the fovea was much decreased in size, but the patient's visual acuity had only improved to 20/40 because of the remaining lesion. This figure appears in color at www.ajtmh.org. 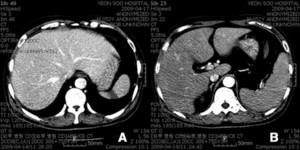 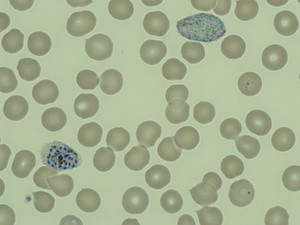 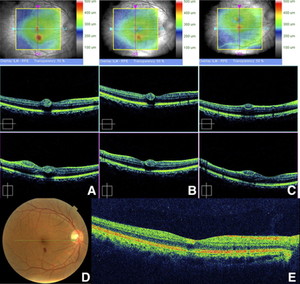 Retinal hemorrhage is a frequently observed sign in Plasmodium falciparum infection.1 Since Lewallen and others1–3 described unusual retinal signs in Malawian children with cerebral malaria in 1993, malarial retinopathy has been regarded as a significant prognostic index of severe malaria. In Plasmodium vivax infection, however, retinal hemorrhage has been rarely reported. Only five cases are in the literature,4–7 and the exact incidence is unknown. Additionally, tertian malaria caused by P. vivax has reemerged since 1993 among soldiers in South Korea near the demilitarized zone (DMZ).8 In this case report, we review the case of retinal hemorrhage with a cotton wool spot in P. vivax infection as well as the previously reported cases. Although only fundus photographs were obtained in previous reports, we analyzed the structural characteristics of the lesions using fluorescein angiography and spectral-domain optical coherence tomography (OCT).

Before presentation, he had traveled to the northern area of South Korea close to the DMZ, the endemic area of P. vivax. He had no other notable medical diseases nor did he have a history of transfusions or drug use. On physical examination, his blood pressure level was 85/52 mmHg, his pulse rate was 136, and he had jaundice, scleral icterus, and splenomegaly. Laboratory examination showed normocytic, normochromic anemia (hemoglobin = 10.5 g/dL; hematocrit = 29.6%; mean corpuscular volume = 90 fL; mean corpuscular hemoglobin = 31.9 pg; mean corpuscular hemoglobin concentration = 35 g/dL), thrombocytopenia (platelet count = 93,000/µL), and normal white blood cell count of 8,100/µL. Coagulation profiles were within normal range (83% prothrombin time with international normalized ratio of 1.14; activated partial thromboplastin time of 42.5 seconds; negative anti-phospholipid antibody; non-reactive Venereal Disease Research Laboratory; protein C level = 74%) with the exception of a decreased protein S level (43%). Abnormal liver function tests (total bilirubin = 9.3 mg/dL; AST = 81 IU/L; ALT = 47 IU/L; alkaline phosphatase = 552 IU/L) and elevated inflammatory reactions (ESR = 43 mm/hour; CRP = 11.89 mg/dL) were still present. P. vivax parasitemia of 9,188/µL was noted on blood-smear examination (Figure 2), but the Gram stain and blood culture were negative. The patient was admitted to the hospital, and he received 2 g of chloroquine for 3 days followed by primaquine for 14 days.

Six days after starting treatment, he complained of a sudden decrease in vision with central scotoma. His best-corrected visual acuity (BCVA) was 20/100 in the right eye and 20/20 in the left eye. On fundus examination, two retinal hemorrhages were found in the right eye, one of which was located at the fovea with a Roth spot and the other of which was inferior to the fovea (Figure 3A). He had no subjective symptoms in his left eye, but one retinal hemorrhage with a cotton wool spot was also found inferotemporal to the optic disc (Figure 3B). No other abnormal findings such as papilledema, retinal vasculitis, or periphlebitis were found. Fluorescein angiography was performed to evaluate retinal perfusion and integrity, but no abnormal lesions were noted with the exception of blocked fluorescence in both eyes caused by retinal hemorrhages (Figure 4A and B). On OCT, the locations of the hemorrhages were confirmed at the level of the intraretinal space, and no other subretinal hemorrhages or fluid collections were found (Figure 5A).

Four weeks after the onset of ocular symptoms, the retinal hemorrhage at the fovea was much decreased in size, but visual acuity had improved only to 20/40 because of the remaining lesion (Figures 5D, 6A and B).

Until the 1970s, tertian malaria caused by P. vivax was highly prevalent in South Korea.9 Malaria infections decreased in the 1980s, and the last case in South Korea was reported in 1984.8 In 1993, however, P. vivax infection reemerged in a young soldier near the DMZ.8 Since then, the number of P. vivax infections has exploded, and outbreak areas have expanded to include Incheon (a western city) and Kangwha-gun (Kyonggi-do).8 It is presumed that the reemergence of P. vivax in South Korea was caused by infected mosquitoes that had flown over from the northern part of the DMZ.8

Malarial retinopathy occurs in around 60% of children with cerebral malaria and less commonly, in less severe forms of malaria.3,10 It has been reported in a similar proportion of adults with severe malaria.11 Fundus abnormalities are characteristic features of malarial retinopathy, and they consist of four distinct components: retinal hemorrhage, retinal whitening, vessel change, and papilledma.3

Retinal hemorrhage is not uncommon; a previous study showed that retinal hemorrhage was present in 129 of 278 cerebral malaria patients (46%).10 Since malarial retinopathy was described in Malawian children with cerebral malaria by Lewallen and others3 in 1993, it has been presumed to be significantly associated with the severity of P. falciparum infection.1–3 Beare and others12 proposed that the detection of malarial retinopathy be a candidate diagnostic test for cerebral malaria. Lewallen and others3 suggested that children with cerebral malaria should be categorized according to their ocular fundus findings, because bedside characterization of malarial retinopathy allows for identification of the patients who require further diagnostic evaluation and intensive intervention. P. vivax infection and retinal hemorrhage, however, have been rarely reported (only five cases in the literature), and the exact incidence number is unknown (Table 1).4–7

Our case represents the sixth report of retinal hemorrhage and the first report of a cotton wool spot in P. vivax infection. Only fundus photographs have been previously recorded in the literature. However, we also obtained fluorescein angiography and OCT images in this case (Figures 4 and 5), the first reported with angiographic and OCT images obtained in P. vivax infection. OCT is a non-invasive optical-signal acquisition and processing method that allows in vivo imaging of retina and optic nerve head.13 We confirmed that the retinal hemorrhages were located in the superficial layer of the retina using these images. The cotton wool spot seen along with the retinal hemorrhage in the left eye is also the first to be reported in P. vivax malaria. The cotton wool spot, a disorder in axonal transport, is thought to be developed because of the localized ischemia of retina or as a boundary sentinel of retinal ischemia.14 It is worth noting, because this cotton wool spot suggests a microcirculatory problem in the presumed absence of sequestration. No other findings, such as cotton wool spot, papilledema, retinal whitening, or retinal vascular abnormalities, have been found in P. vivax infection, and this might be explained by the differences between P. falciparum and P. vivax.7 However, it might also be attributable to differences in severity and frequency between P. falciparum and P. vivax.

The six reported cases of retinal hemorrhages in P. vivax infection have all come from India or South Korea. Endemic prevalence of retinal hemorrhage in P. vivax infection might be present, and a prospective study about the causes is worth pursuing. However, it should always be remembered that there have only been a few cases reported, and more cases are needed to support this hypothesis.

The mechanism of retinal hemorrhage is uncertain in P. vivax infection. Sequestration of parasitized red blood cells (RBC) and cytoadhesion with rosetting are key processes in P. falciparum patients.15 In P. vivax, however, sequestration has not been observed at present, although rosetting has been reported but rarely.15,16 In addition, it is possible that accompanied thrombocytopenia and anemia could play a role in the development of retinal hemorrhage as a confounding or even a sole cause.

Retinal hemorrhages in malaria patients are usually absorbed spontaneously, but a permanent decrease in visual acuity is possible in rare cases.7,17 In our case, the visual acuity of the right eye was decreased in spite of absorption of retinal hemorrhages at the fovea. There are similarities between this case and the case reported in 2002, because the fovea was involved, the retinal hemorrhage at the fovea lasted longer than other lesions did, and a permanent decrease in visual acuity was present. It can be presumed that hemotoxicity to the photoreceptor after disruption of tissue oxygenation could result in the failure of vision recovery. Thus, foveal involvement might be an important prognostic factor in predicting final visual outcome, and it needs more case collecting and analysis.

The possibility of retinal hemorrhage should be considered in malaria patients, even in those with P. vivax infection, and the possibility of malaria also should be considered in a patient with unexplained retinal hemorrhage and fever. Prospective ophthalmologic studies associated with systemic evaluation by an internist could provide further information about the retinopathy of P. vivax.