Blood parasite loads of patients with visceral leishmaniasis before and after treatment with meglumine antimoniate. **Number of parasite per microliter of blood. 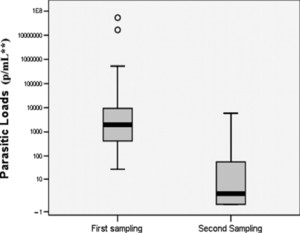 Forty-two patients with visceral leishmaniasis in Tunisia were treated with meglumine antimoniate and followed-up for clinical improvement and blood parasite load determined by quantitative real-time polymerase chain reaction (PCR). Parasite loads before treatment ranged from 27 to 5.3 × 107 parasites/mL. At the end of treatment, parasite load decreased significantly in 39 cured patients (P < 0.001). The decrease in parasite load after treatment was greater than 99% for 34 patients and PCR results became negative in 23 of them. Two patients without clinical improvement showed no or slight decreases in parasite load (209 versus 202 parasites/mL and 1,765 versus 146 parasites/mL). One patient showed had a relapse seven months after showing a good response to treatment. His parasitemia remained high despite a sharp decrease (5.2 × 105 versus 5.9 × 103 parasites/mL).

Visceral leishmaniasis (VL) in Tunisia caused by Leishmania (L.) infantum and is most common in children less than five years of age. 1,2 Diagnosis of this disease is still based on direct examination and in vitro culture of bone marrow aspirates. 1,2 Pentavalent antimonials, particularly meglumine antimoniate (MA), remain the first-line drugs used. 1,3

In recent years, real-time polymerase chain reaction (PCR) has been developed and used successfully for the diagnosis of VL.4 This procedure is non-invasive, highly sensitive and specific, and useful in monitoring responses to therapy by quantification of parasitic load.4–6 The aim of the present study was to investigate a cohort of VL patients in Tunisia treated with meglumine antimoniate by follow-up of clinical improvement and evolution of blood parasite load determined by real-time PCR.

From September 2004 through June 2008, 42 consecutive VL patients admitted to the Department of Paediatrics of Kairouan Hospital in Kairouan, Tunisia, were enrolled in the study. The inclusion criterion was the presence of Leishmania parasites in bone marrow aspirates. The age of the patients ranged from 8 months to 6.5 years (mean = 2.25). None of the patients had immunosuppressive diseases or risk factors for infection with human immunodeficiency syndrome. The most common clinical manifestations were anemia (100% of patients), fever (97.6%), spleen enlargement (97.6%), and hepatomegaly (35%). Iso-enzymatic typing of 26 Leishmania isolates showed that all isolates belonged to the L. infantum complex (17 MON-1, 7 MON-24, and 2 MON-80).7 All patients were treated with meglumine antimoniate (Glucantime ®) as recommended by the World Health Organization; they received 20 mg of pentavalent antimony/kg/day for 28 days. 3,8

Blood samples were systematically collected before treatment (day 0) and at the end of treatment (day 30). A third sample was collected from 10 patients six months after treatment (day 180). According to Tunisia legislation, all tests were qualified with direct benefit for the patients.

DNA was extracted from buffy coats obtained from 2–5 mL of blood collected into tubes containing EDTA. Extraction was conducted by using the QIAamp DNA mini kit (Qiagen, Hilden Germany) as recommended by the manufacturer. Elution of DNA was conducted at 56°C for 5 minutes in 100 μL of Tris-acetate, EDTA buffer.

Real time-PCR was conducted according to the method of Mary and others,4 Which is specific for the kinetoplast genome of Leishmania. The PCR was performed in a final volume of 25 μL by using a TaqMan universal master mixture (Roche, Palo Alto, CA) containing 100 μM of direct primer (5′-CTTTTCTGGTCCTCCGGGTAGG-3′), 100 μM of reverse primer (5′-CCACCCGGCCCTATTTTACACCAA-3′), 50 μM of probe (FAM-5′-TTTTCGCAGAACGCCCCTACCCGC-3′-TAMRA), and 1 μL of DNA extract. Amplification was conducted in an ABI PRISM 7700 Sequence Detector (Applied Biosystems, Foster City, CA) for 50 cycles at 95°C and 60°C. Each sample was tested in duplicate. A distilled water sample was included as negative control in each test.

Parasite load was determined by the means of a standard curve made with serial dilutions of Leishmania DNA extracted from 5 × 106 L. infantum promastigotes (Figure 1). This procedure had a detection limit of 0.03 parasites/μL (3 parasites/100 μL of DNA extract). Results are expressed as number of parasites per milliliter.

Among 42 patients, 39 had a total recovery. One patient had no clinical improvement (Rs 2), one patient had partial improvement with persistence of fever (Rs 1) and one patient had a relapse seven months after the initial treatment, which seemed efficient (R l). Results of serologic analysis for infection with human immunodeficiency syndrome was negative in patients Rs 1, Rs 2, and R l.

Real time-PCR of blood samples was highly sensitive in the diagnosis of VL; positive results were obtained for all 42 patients studied. In comparison with an equally sensitive qualitative PCR, 9,10 the real-time PCR can be performed more rapidly and is not subject to post-PCR contamination.4 Parasitic load before treatment showed high variability (from 27 to 5.3 × 106 parasites/mL). Parasite loads were higher than those reported in counties in the northern Mediterranean area in which VL was endemic.6 This finding is probably caused by longer diagnosis delays in Tunisia. 1,2 It may also suggest higher parasitemia in children than in adults during the acute phase of the disease.

Estimation of parasite load by real-time-PCR is also useful for therapeutic monitoring. 5,6 Follow-up of the 39 cured patients showed an important decrease in parasite load (P < 0.001). However, 16 remained positive at the end of treatment; Long-term samples (day 180) obtained from nine of these patients showed a continuous decrease, with negative parasite loads in seven samples. Such persistence of Leishmania DNA after treatment has been reported after treatment with meglumine antimoniate or amphotericin. 6,10 However, decreased kinetics of parasitemia after treatment with meglumine antimoniate is different of from that observed after treatment with liposomal amphotericin, which induces an undetectable parasitemia in nearly all patients in 5–10 days. 6,9,10 This difference is probably caused by different modes of action of the two drugs or relative resistance levels of parasites to antimony. 6,11

The two patients who showed no improvement after treatment (Rs 1 and Rs 2) and the relapsed patient (Rl) represent the first patients reported regarding a lack of sensitivity of L. infantum isolates in Tunisia to meglumine antimoniate. Resistance of L. infantum to meglumine antimoniate has been reported in northern Mediterranean countries in immunocompromised and immunocompetent patients with VL. 11,12 Quantitative real-time PCR is a useful procedure for monitoring responses to treatment in patients with VL. On the basis of parasite load after treatment with meglumine antimoniate, an absence or a slight decrease (as observed in patients Rs 2 and Rs 1, respectively) in parasite load suggests a lack of responsiveness to treatment. Conversely, persistence of high parasite loads despite a strong decrease (as observed in patient R l) stresses the need for closer clinical and biological follow-up even in patients who show clinical improvement.

These authors contributed equally to this article.