Kaplan-Meier survival curve depicting relapses and cumulative risk (probability) of relapse over 19 years among all subjects, including two subsets. Relapse rate peaked during Years 11 and 12. x axis (→) denotes number of subjects remaining at risk (sample size minus relapses and censoring). *Adjusted for number subjects remaining at risk. This figure appears in color at www.ajtmh.org. 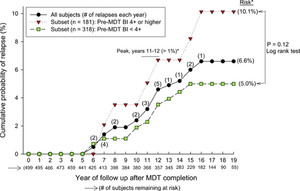 The emergence of drug resistant Mycobacterium leprae in the 1970s led the World Health Organization (WHO) to implement multiple drug therapy (MDT) worldwide, beginning in 1982. WHO-MDT for multibacillary (MB) leprosy includes monthly observed rifampin and clofazimine and daily unsupervised dapsone and clofazimine, typically administered for 2 years. In 1998, a standard course of WHO-MDT for MB leprosy was reduced to 1 year.1

Between 1987 and 1994, we enrolled 500 MB leprosy patients completing 2-year WHO-MDT for relapse monitoring at regular intervals. Relapse was defined as new skin lesions consistent with leprosy and an increase in BI ≥ 2+ (≥ 100-fold) at any single slit-skin smear site, in comparison with the lowest BI attained at that site anytime after treatment completion. For supplemental analyses, samples from new lesions were obtained for histopathologic assessment and mouse footpad inoculations, the latter to determine M. leprae viability and sensitivity to each MDT component. In a 2003 interim analysis, with mean follow-up of 10.8 years/subject, we reported 15 relapses, which was a cumulative risk of 3.9%; among a subset with “high” pre-MDT average BIs (≥ 4+), the cumulative risk was higher.7

Here, in the final report, we describe findings through study completion in 2006, with mean follow-up increased to 12.8 years/subject, which were found to show a meaningful difference.

The protocol was scientifically and ethically approved by the LWM institutional review board. All adult subjects provided signed informed consent and were counseled on the importance of regular clinic follow-up. Minor subjects provided assent, with parental or guardian consent. Transportation allowances for clinic visits, multivitamins, and a clinic visit reminder card were provided. The study aimed to enroll 500 subjects and was expected to run at least 10 years after the last subject was enrolled. Subjects were asked to make clinic visits for as long as possible, but there was no per-protocol minimum follow-up times to meet the primary outcome of relapse detection.

As described earlier in an interim report, 500 well-documented MB leprosy patients from the Cebu City area who completed 2-year WHO-MDT from 1987 to 1994 and were otherwise healthy were sequentially recruited and monitored for signs of relapse at Cebu Skin Clinic, a well-established leprosy referral and treatment center.7 MDT followed WHO guidelines and consisted of 24 doses of rifampin (600 mg) and clofazimine (300 mg) given at monthly intervals at the clinic and self-administered daily dapsone (100 mg) and clofazimine (50 mg). No additional efforts to enhance or assess adherence of unsupervised medication at home were conducted. Study eligibility included supervised 24 doses of rifampin and clofazimine given at monthly or near monthly intervals, within a 30-month period, fulfilling the WHO criteria for a full treatment course. Treatment defaulters were not enrolled.

The BI, representing the number of acid-fast bacilli (AFB) from a single slit-skin smear site, or an average of AFB from four to six slit-skin smear sites (average BI), stained by Ziehl-Neelsen method and viewed by oil immersion microscopy, ranges from 1+ to 6+ on a logarithmic scale.8 MB leprosy, on beginning MDT, was defined as skin lesions consistent with leprosy and at least one slit-skin smear BI of ≥ 2+ (≥ 1–10 AFB/10 fields), among four to six sampled sites. A “high” pre-MDT average BI was defined as ≥ 4+. In patients with multiple discrete lesions, six sites were generally smeared to include both earlobes and up to four lesions, whereas patients with generalized infiltration had both earlobes, both elbows, and two back sites smeared. In patients with only one lesion, one earlobe and three sites within the active lesion were typically smeared.

After MDT completion, subjects were monitored regularly for signs of relapse, until study completion in 2006. Subjects were also encouraged to attend clinic between scheduled visits whenever undetermined skin signs or symptoms occurred to include type 1 (reversal) or type 2 (erythema nodosum leprosum [ENL]) lepra reactions. Assessments included whole body clinical examinations and slit-skin smears, which, to the greatest extent possible, were done at yearly or every 2-year intervals or when new lesions were noted.

Relapse was defined as the appearance of new skin lesions consistent with leprosy and an increase in a single site BI ≥ 2+ (≥ 100-fold) among any of four to six slit-skin smear sites, in comparison with the lowest BI attained at that site anytime after MDT completion. Tissue from new lesions was obtained for supplemental histopathologic assessment and mouse footpad studies; neither was required to meet the relapse case definition.7

Histopathologic criteria for relapse included cellular infiltrates consistent with leprosy (hematoxylin and eosin stain) and the presence of AFB (Fite-Faraco stain). For mouse footpad studies, to determine M. leprae viability and drug resistance profiles, an inoculum of ~5 × 103 AFB taken from an active lesion was inoculated into each hind footpad of untreated CBA/J mice as described.7 A mean bacterial load of ≥ 1.5 × 105 M. leprae/footpad after 6–8 months confirmed viability. Drug resistance studies assessing each component of MDT were also conducted, described in detail earlier.7 A ≥ 20-fold increase in the mean number of AFB over the original inoculum in harvested mouse footpads after 6–8 months was classified as “resistant.”

Subjects presenting with signs suggestive of reversal reaction or ENL, the former sometimes confused with relapse, were assessed by slit-skin smears at four to six screening sites, and new lesions were biopsied for histologic assessment. Confirmed reactions were treated with anti-inflammatory agents.

Relapsed subjects were offered a second course of MDT or ROM, the latter consisting of 12 monthly, supervised doses of rifampin (600 mg), ofloxacin (400 mg), and minocycline (100 mg). 10

Relapses were expressed as the percentage of patients relapsed, with incidence densities calculated as the number of relapsed patients divided by the total person-years of follow-up. Relapses were plotted as a Kaplan-Meier survival curve to estimate cumulative risk, which adjusts for number of subjects still at risk. 11 Subset comparisons of subjects were made by log rank test. When > 1 year had elapsed between smears for a relapsed patient, time to relapse was estimated by selecting the “midpoint” year of the period between most recent smear and the year of smear positivity.4 Lepra reactions were reported as proportions.

Table 3 summarizes the clinical characteristics of all 23 relapses. All occurred in subjects classified as BL or LL before MDT. New lesions sometimes arose at previously affected sites. Relapses occurred in 20 men and 3 women, an approximate ratio of 6 to 1, versus an enrollment ratio of 3 to 1, respectively. All but two subjects, both men, attained slit-skin smear negativity before relapse. Four relapses were histopathologically classified as histoid (nodular) leprosy.

Among 76 (15%) subjects in the study presenting with lepra reactions (i.e., after MDT completion), there were 68 reversal reactions and 8 ENLs. Most were classified as mild, with minimal effect on daily activity. All reactions met standard clinical criteria and were confirmed by slit-skin smears and histolopathology that disqualified relapse and response to anti-inflammatory agents. Among 23 relapsed subjects, reversal reactions occurred in two at post-MDT Years 1 and 11, followed by relapse at Years 12 and 15, respectively.

Mycobacterium leprae harvested from all 23 relapsed subjects were confirmed viable in mouse footpad studies. All isolates were classified as sensitive to rifampin and clofazimine and all but three were dapsone sensitive.

Five hundred MB leprosy subjects who completed 2-year WHO-MDT between 1987 and 1994 were monitored for relapse. At study termination in 2006, follow-up was 6,401 patient-years, with a mean of 12.8 years/subject. This is substantially longer than most other prospective MDT relapse studies. 3,12 Indeed, detection of relapses in our cohort up to 16 years after MDT completion underscored the amount of time that may be needed to better estimate relapse risk. Of note, “relapse,” as used here, reflected either new infection or growth of residual M. leprae, attributed to activation of dormant organisms not killed by MDT, often called “persisters.”

Here, 23 relapses among all subjects was equivalent to a cumulative risk (probability) of relapse of 6.6%, up to 16 years after MDT (cumulative risk adjusts for number of subjects still at risk). All relapses were clinically classified as BL or LL, supported by mouse footpad and histologic findings. The male to female ratio of relapses was notably higher than the enrollment ratio, supporting the notion that men may be at higher risk for relapse. 13 All but two subjects attained slit-skin smear negativity before relapse, which is a general indication that achieving smear negativity is not necessarily protective against eventual relapse.7

Among a subset of 181 subjects with high pre-MDT average BIs (≥ 4+), there were 11 relapses, equaling a cumulative risk of 10.1% at 16 years after MDT. This finding is in agreement with earlier reports concluding that higher pre-treatment average BIs increase the risk of relapse 14 and argues for increased counseling, long-term follow-up, and perhaps extending MDT in this group.

For the entire cohort, the relapse rate peaked at Years 11 and 12 after treatment (> 1%/year, adjusted for number still at risk). A relapse peak rather than a consistent rate, a clear decline in relapse rate at Year 13 and beyond, and M. leprae from all relapsed subjects showing sensitivity to two or more MDT components suggested reactivation of residual dormant organisms not eliminated by MDT, called persisters, with a lesser role of new infection. Indeed, persisters begin multiplying only after antileprosy treatment was discontinued and would not be detected on long-term follow-up slit-skin smears until skin lesions appeared. 15,16 We speculate our data reflect the natural history of reactivated disease after treatment.

In Cebu, continued high transmission rates of leprosy would make new infection a reasonable likelihood in some relapses. 17 However, if new infections were playing a large role, we propose the relapse rate would have been steady, rather than showing a clear peak at 11–12 years after completing treatment. A third possible cause for relapses, drug resistance to MDT, was not evident either clinically or by mouse footpad assays; three isolates showing dapsone resistance are insignificant. Indeed, even with four relapses presenting with histoid leprosy, sometimes considered a marker of drug resistance, reports of MDT failure are rare and, moreover, clofazimine-resistant M. leprae may be nonexistent. 18–21

With the extraordinary effort required to treat and follow patients to accurately measure relapse, coupled with widespread MDT implementation only since the early 1990s, prospective MDT relapse studies are relatively scarce. Reported rates vary widely, from 0% to 20%, likely reflecting site-specific influences and methodology. For example, in the AMFES cohort in Ethiopia, among 502 MB patients completing 2-year WHO-MDT, there were no confirmed relapses at 10–15 years after MDT completion, including a subset of 141 patients with a pre-MDT average BI ≥ 3+. 3,22 In contrast, Jamet and Ji4 reported post-MDT relapse rates at 3% after 3.5 years, increasing to 20% after 6 years. Our data approximate the middle range of earlier findings, with relapse rates between 5% and 10%, and higher rates associated with higher pre-MDT BIs. 14 A higher pre-treatment bacterial burden (average BI) may be more likely to contain persister organisms, suggesting one reason for increased relapses.

Molecular methods documenting genetic polymorphisms among M. leprae strains may eventually clarify whether long-term relapses after MDT are caused by persisters, new infection, or both. Here, attempts to determine polymorphisms of pre-MDT and relapsed lesion samples were unsuccessful, attributed to nucleic acid degradation during tissue processing. Although a long-term relapse rate of 5–10% may be acceptable to some, a larger implication, regardless of etiology, is that counseling and long-term follow-up is warranted for MB leprosy patients who have completed WHO-MDT, especially those with high pre-MDT average BIs. 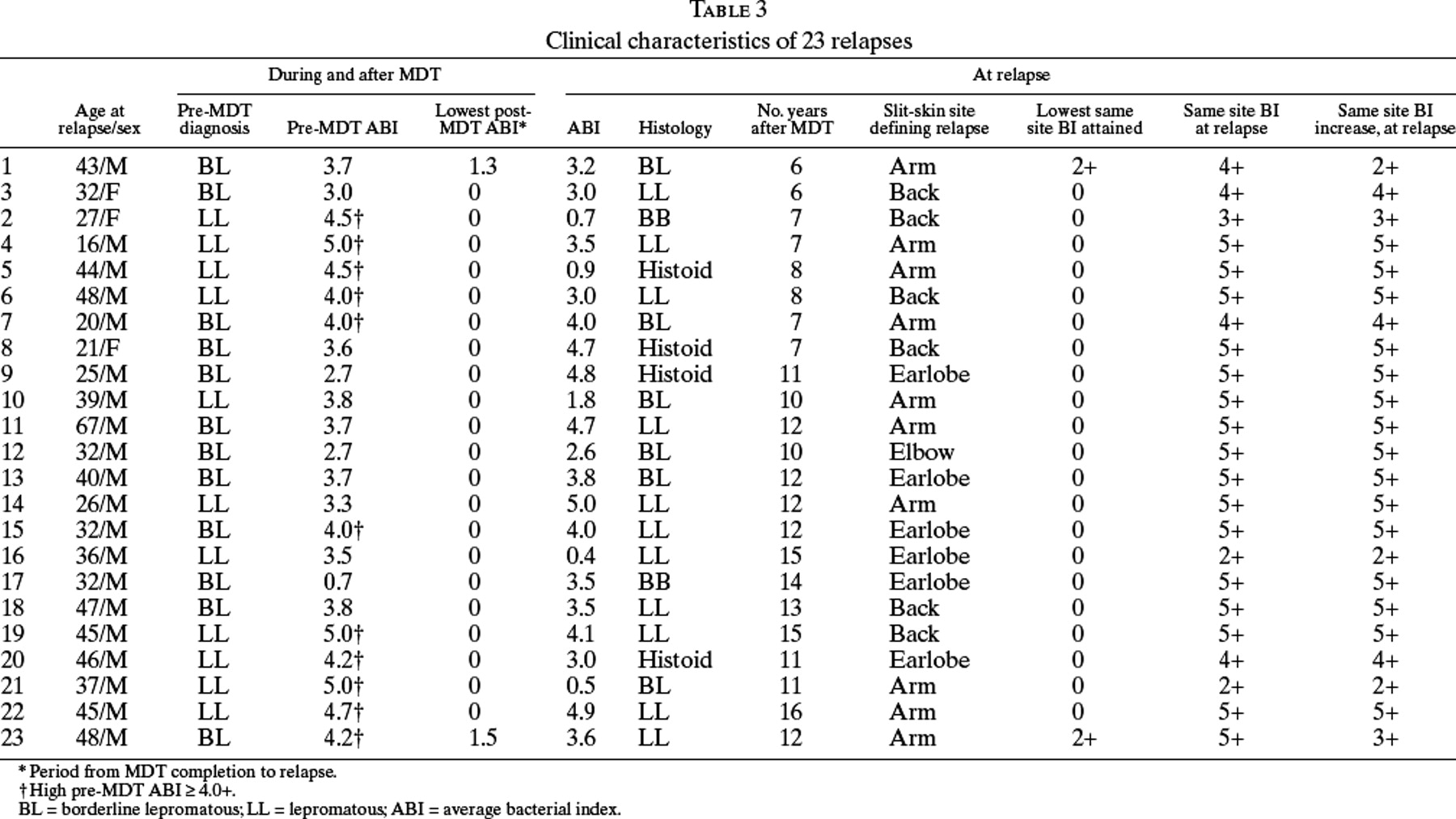 Cumulative risk of relapse, by year after MDT completion, among all subjects and two subsets 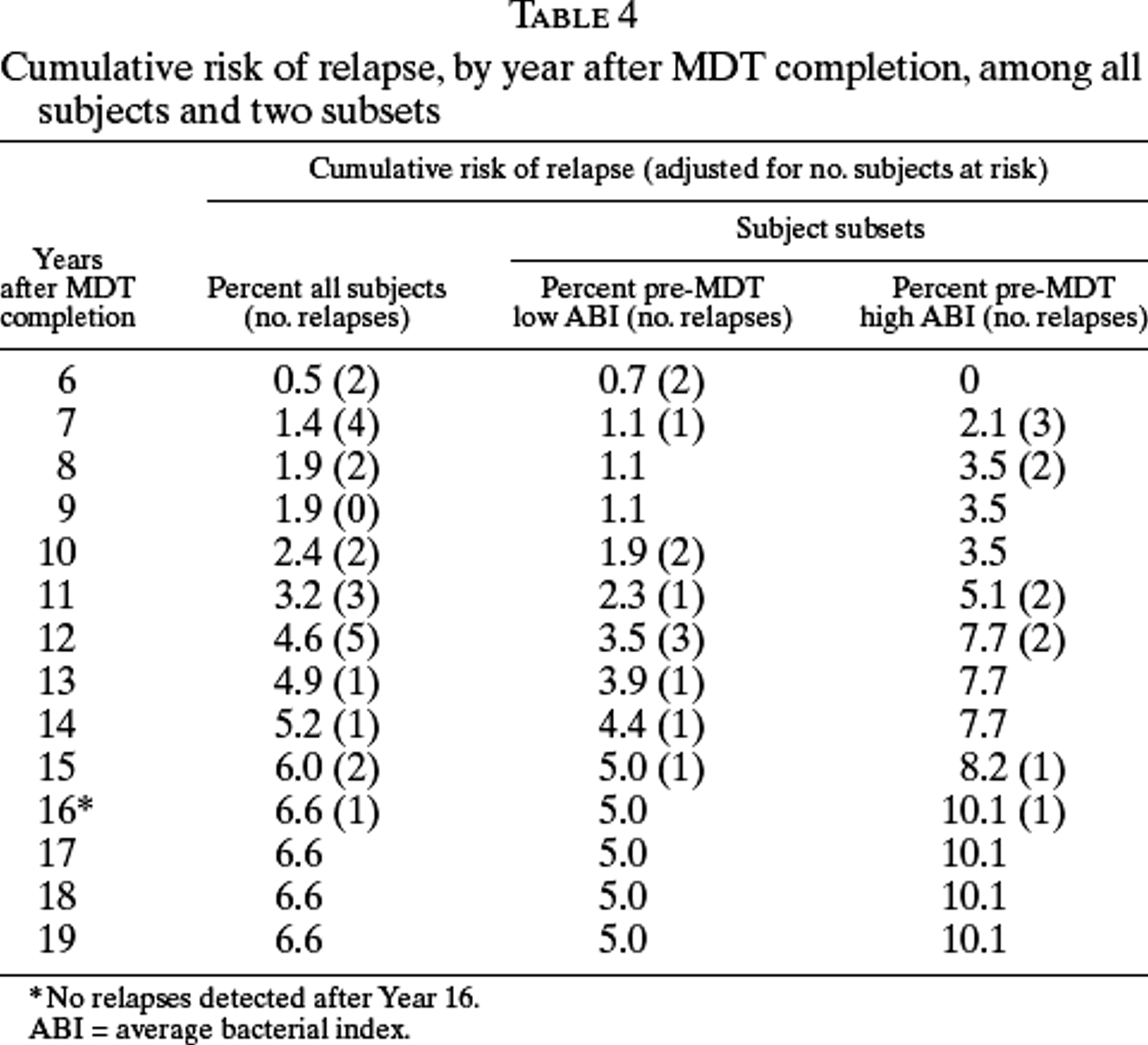