Global distribution of intestinal schistosomiasis among schoolchildren 7–22 years of age in Mozambique. This figure appears in color at www.ajtmh.org.

Global distribution of urinary schistosomiasis among schoolchildren 7–22 years of age in Mozambique. This figure appears in color at www.ajtmh.org.

Global distribution of soil-transmitted helminths among schoolchildren 7–22 years of age in Mozambique. This figure appears in color at www.ajtmh.org. 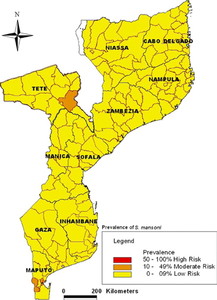 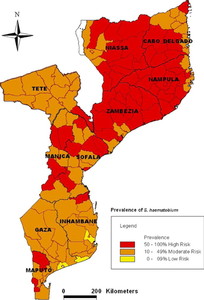 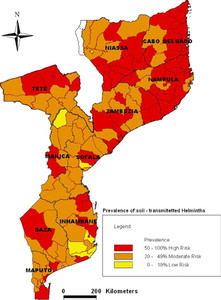 Schistosomiasis and soil-transmitted helminths (STHs) are most prevalent in developing countries. In Mozambique, the first and only national survey of the distribution and prevalence of schistosomiasis and STHs was conducted in 1952 and 1957. Only occasional surveys in restricted areas have been conducted since the 1950s. The objective of our survey was to update information on the geographic distribution and prevalence of schistosomiasis and STHs in this country. During August 2005–June 2007, the Schistosomiasis and STH Laboratory of National Institutes of Health of the Ministry of Health undertook an epidemiologic survey among schoolchildren. A total of 83,331 persons attending primary schools were sampled. The mean age was 11.36 years (range: 7–22 years). Stool and urine samples were collected and examined by using Kato-Katz and filtration and Ritchie and Willis techniques. Results indicate a widespread occurrence of Schistosoma haematobium (overall prevalence = 47.0%) and STHs (prevalence = 53.5%). Prevalence varied dramatically across the country, with the highest prevalence in districts in northern provinces (Cabo Delgado, Niassa, Nampula, and Zambezia) and in certain provincial capital cities. Districts in the southern region of the country were less affected. Schistosoma mansoni was less common, with prevalence of 1%. We conclude that schistosomiasis and STHs are widely distributed in Mozambique and confirm the need for a national helminth control program.

Schistosomiasis, which is caused by Schistosoma haematobium and S. mansoni, and soil-transmitted helminths (STHs) (Ascaris lumbricoides; Trichuris trichiura, and the hookworms Ancylostama duodenale and Necator americanus) are important public health problems in tropical and sub-tropical countries, with schoolage children typically most affected. Schistosomiasis can result in overt clinical disease and contribute to anemia. Chronic and intense infections with soil-transmitted helminths can cause malnutrition and iron-deficiency anemia, and can also adversely affect physical and mental growth in childhood.1 Thus, there has been a recent increase in financial and political commitments to control schistosomiasis and STHs, with a particular focus on school-based programs. To specify such efforts to areas in most need and to ensure programs are cost-effective, there is a need for comprehensive and up-to-date information on the prevalence and distribution of infection. 2,3

In Mozambique, most available data on schistosomiasis and STH pre-date the independence of this country in 1975, such that the current status of the disease is unknown. The first report of urinary schistosomiasis was in 1904 in Nampula (formerly the capital of Mozambique) Province, particularly the Angoche District. The first national survey of the distribution of schistosomiasis (urinary and intestinal) was conducted in 1952.4 Surveys conducted by Doumenge and others5 and Rey6 in Mozambique showed prevalence ranges of 8.3% to 98.3% for Schistosoma haematobium infection and 1.2–34% for Schistosoma mansoni infection. The purpose of our study was to update information on the distribution of schistosomiasis and STHs in Mozambique and provide essential information to guide implementation of a national control program.

The study was conducted in the 140 districts in Mozambique (10°27′–26°52′S, 40°51′ E–30°12′W). This country has an area of 799,380 km2, of which 13,000 km2 are inland bodies of waters. The estimated total population is 18,000,000. The country is divided into three regions (southern, central, and northern), 10 provinces, and the capital of Maputo. A total of 140 districts were surveyed in the 10 provinces and Maputo. Each district is divided into small units called administrative posts and each administrative post is divided into small units called localities. In each locality, the school system is divided into small zones called Zonas de Influência Pedagógica (Pedagogical Influence Zones) (ZIPs), with each ZIP consisting of an average of eight schools. All ZIPs in each district were involved, but only one school from each ZIP was randomly selected for this study on the basis of a random numbers table. From each selected school, one class from each grade or level from levels 2 to 7 was included and 50% of children from each chosen class were randomly selected by using a random number table and according to sex ratio.

In each selected school, selected children were given two wide-mouthed polythene bottles labeled with the same identification number and asked to urinate into one and defecate into the other. All urine samples were collected between 10:00 am and 2:00 pm. Each child was asked to collect a stool sample on the same day. All collected samples (urine and stool) were transported to the Laboratory of Intestinal Parasitology of National Institutes of Health of Mozambique for parasitologic examinations for samples from Maputo Province. For the rest of the provinces, the samples were examined at district level (district hospital laboratories). Examinations were conducted by trained technicians from the National Institutes of Health in Maputo. The presence of S. haematobium ova in urine was determined in a single 10-mL urine sample by using the 25-mm Nuclepore filtration method.7 Samples were recorded as positive or negative for eggs. For positive samples, numbers of eggs on the filter paper were also recorded and the intensity of infection was expressed as number of eggs/10 mL of urine. Stool samples were examined for S. mansoni by using the Kato-Katz technique8 and for STH by using the Ritchie and Willis techniques.9

Informed consent was obtained from all children ≥ 18 years of age and from parents or legal guardians of children less than 18 years of age. Ethical clearance was obtained from the National Bio-ethical Committee for Health of Mozambique (NBCHM), and the survey was conducted according to NBCHM guidelines. The purpose of the study and the non-invasiveness methods were explained to all schoolchildren and verbal consent was obtained from the children. Permission was also obtained from school principals. A national health campaign was started in Mozambique in October 2008 specific for children less than five years of age. The next step will include schoolchildren attending primary level schools throughout the country.

Frequency distributions and arithmetic means (if applicable) were calculated for all variables. Person’s chi-square, McNemar, and Student t-tests were used to assess prevalence and intensity of infection by sex, province, and age group. Infection intensities for urinary schistosomiasis were classified into three categories: no infection, light infection (< 50 eggs/10 mL of urine), and heavy infections (≥ 50 eggs/10 mL of urine), according to Montresor and others. 10 Combining observed prevalences in the present study and existing data about the number of schoolchildren in the country can be used to estimate numbers infected schoolchildren. 11

Characteristics of the study population.

Overall prevalence and patterns by age and sex.

On the basis of observed prevalences, we estimated that 2,036,633 primary school children are infected with schistosome species and 1,937,441 with STH species (Table 4).

In contrast to the high prevalence of S. haematobium, the prevalence of S. mansoni was low in Mozambique. This finding may reflect the better adaptation of Bulinus globosus (intermediate host for S. haematobium) to the biologically unstable streams habitats than Biomphalaria pfeifferi (intermediate host for S. mansoni).17 It has been reported that high temperatures have a negative effect on B. pfeifferi density in southern Africa. 18,19 Interestingly, the prevalence of S. mansoni in the current study was lower than that observed in the first countrywide survey. This finding could be caused by the fact that many of the canals schemes existing in 1950s and 1960s are now concrete-lined and well-maintained and kept free of vegetation. In addition, in many cases, bridges have been built, which prevent persons from entering the canals. However, little or no information is available in Mozambique concerning the population of intermediate host snails for schistosomiasis, and there is a need to collect updated information.

In terms of STH distribution, prevalence was highest in Zambezia and Cabo Delgado provinces and lowest in Niassa and Inhambane provinces. Possible factors for this distribution include variation in socioeconomic, cultural, and environmental health conditions and poor individual and community hygiene. For example, although the present study did collect meteorologic data, observed geographic differences may be caused by variation in climatic and environmental factors. 2,3 Relative to earlier studies, STH prevalence was particularly high in some cities, including Quelimane, Chimoio, and Beira. This finding may be explained by increased rural-urban migration and overcrowding, and the deterioration of the water supply and sewage systems after independence, particularly in peri-urban areas. Coincidently, districts located in the northern area of the country, which is less developed and more rural than the districts in the southern area were more affected by schistosomiasis and STHs.

As well as providing insight into the geography of helminth infection in Mozambique, the current study also provides essential practical information for planning control. For example, it enables estimation of drug requirements for planned national deworming programs.

The results provide an epidemiologic framework for design and implementation of a planned STH and schistosomiasis national control program. The northern and central areas of the country were the most affected. Surprisingly, some provincial capital cities such as Quelimane, Chimoio, and Beira were heavily infected within the provinces. Also, the results of the present study show that STHs and schistosomiasis, particularly urinary schistosomiasis, are the major parasitic health problem throughout the country. Investigations that may give insight into the reasons(s) why intestinal schistosomiasis is less prevalent now than before are important for a full understanding of the factors involved.

Characteristics of the study population, Mozambique

Prevalence of soil-transmitted helminths and Schistosoma by species, Mozambique 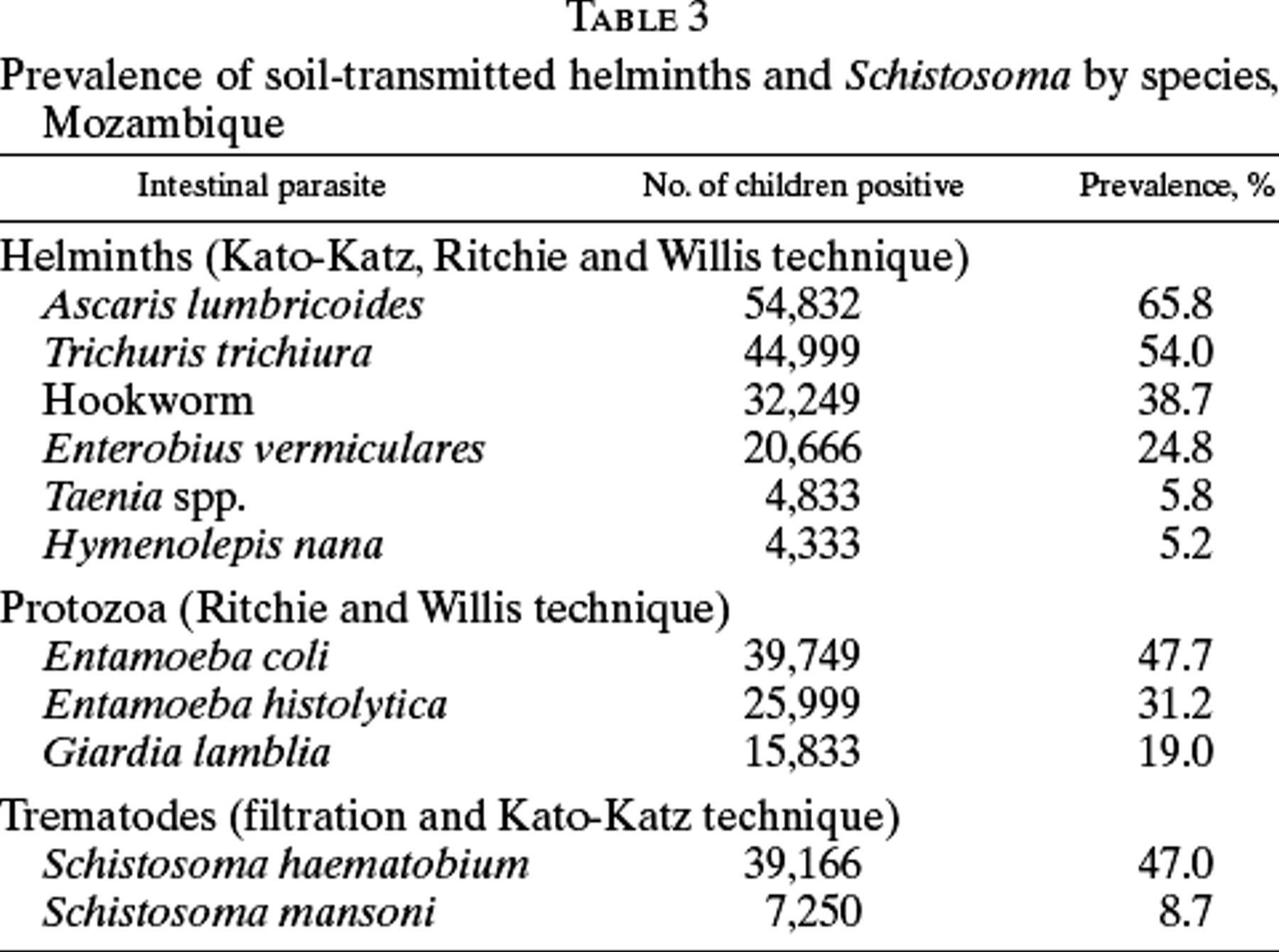 Estimation of number of schoolchildren infected with soil-transmitted helminthes and Schistosoma spp., Mozambique