Macroscopic aspect of methyldopa L&A at purchase time (left) and after 6-month storage at simulated tropical conditions (right). This figure appears in color at www.ajtmh.org.

Search for other papers by Marc Twagirumukiza in
Current site
Google Scholar
PubMedClose
,
An Cosijns
An Cosijns

Good-quality medicines are a prerequisite to successful treatment. Medicines can be substandard in quantity of active ingredient or in quality from purchase or become substandard because of some degradation.1 Poor stability may lead to drugs becoming toxic or increasingly inactive.2 High temperature and relative humidity (RH) are the most important factors involved in drug degradation.3 Although stability testing at high RH and temperature is mandatory in the drug development process, 2,4 this should not exclude quality monitoring of medicines. However, in most of sub-Saharan African (SSA) countries, no systematic quality control is done at entrance to track substandards.5

The substandard quality of medicines in developing countries has been largely reported.6–9 However, the majority of these reports focus on medicines used in infectious diseases, 10–13 which are commonly endemic in developing countries. Medicines used in non-communicable disease (NCDs) such as hypertension and other cardiovascular diseases (CVDs) have been poorly addressed. NCDs, specifically CVDs and hypertension, are rarely on the health planning agenda in SSA, 14 even if they are known now as real public health problems in SSA. 15 Projections show that, in a few years, CVD will dominate the worldwide fatal illness, 16 which implies that more emphasis should be put on both risk factors to prevent the trend 17 and the treatment to reduce mortality. Hypertension is an important risk factor for CVD. The burden of hypertension was estimated at 79.8 million in SSA in 2002. 18 As for other conditions, in hypertension, the use of substandard quality drugs may result in treatment failure,9 including fatal consequences because of low drug content and toxic degradation products. 19

Rwanda and many sub-Saharan countries 2,20,21 import the majority of their drugs from various countries. The lack of systematic quality control and a liberalized drug distribution system create an environment favorable for introducing low-quality drugs. In addition, the tropical climate conditions (high temperature and humidity) may alter the quality of drugs during distribution and storage. This study aimed to assess the quality of antihypertensive drugs from Rwandan pharmacies and to investigate the influence of tropical storage conditions on drug quality.

A selection of the most commonly used antihypertensive drugs in Rwanda was listed. In total, 10 different formulations of these drugs were found in 38 pharmacies. Pharmacies included all 4 public pharmacies (located in Kigali or Butare) and 34 randomly selected official private pharmacies in Kigali. A sample of each test formulation with remaining shelf life of at least 2 years was bought and kept in their original package until analysis. Table 1 shows details of all formulations sampled. For each drug, the original brand purchased from a pharmacy in Belgium or France was used as reference. Before analysis, all reference and test formulations were coded to blind the investigator to the origin of the drug during the analysis.

Drug quality was studied by analyzing drug content and in vitro dissolution. A substandard in vitro dissolution profile may indicate decreased bioavailability. 22,23 The drug content and in vitro dissolution of all formulations were evaluated immediately after purchase and after 6-month storage. Drug storage was done according to the “International Conference on Harmonization (ICH) harmonized tripartite guidelines on Stability testing of new drug substances and products” 24,25 at long-term (25 ± 2°C and 60 ± 5% RH) and accelerated testing conditions (40 ± 2°C and 75 ± 5% RH), representing storage under Zone II and very hot/humid tropical (Zone IV) conditions, 25 respectively. All drugs were analyzed using methods specified in the 2006 US Pharmacopeia and National Formulary (USP29–NF24) monograph of the respective drugs. 26 The assays were repeated three times, and results are the mean of three determinations.

For drug content, the USP29–NF2426 acceptance limits are 90–110% of the label claim, whereas for in vitro dissolution, the limits of released amount of drug after a recommended period varies from one drug to another 26 as shown in Table 3.

where n stands for the number of time points and t is the time point considered. R equals the reference drug and T is the drug to be tested.

After 6-month storage at ambient conditions, the content of the two Cetopril formulations remained (as expected) substandard. In addition, the content of the methyldopa formulation from Kenya also became substandard. This formulation was already close to the lower acceptance limit at purchase time (Table 2). On average, the content of test drug formulations decreased 1.7 ± 1.1% after 6 months of storage. The largest decrease (3.3%) was found for the atenolol (Catenol) from India, followed by hydrochlorothiazide (HCTZ) L&A from Kenya (3.0%), propranolol (Cepanolol; 2.4%) from India, methyldopa (Aldomet) from Pakistan (2.2%), and captopril 50 mg (Cetopril, 2.1%) from India. The smallest decrease (0.2%) was found for HCTZ Cipla from India.

Compared with 6 months under long-term testing conditions, the dissolution profiles of all test drug formulations were on average 7.5 ± 6.0% lower after 6 months under accelerated testing conditions storage. The largest difference was found for methyldopa (Aldomet) from Pakistan (16.2%), followed by methyldopa from Kenya (15.4%) and atenolol (Betanorm; 15%). The smallest difference was recorded for hydrochlorothiazide L&A from Kenya (0.5%).

Data about substandard drugs in SSA remain scattered and heterogeneous in various drug classes. The literature reports 4–100% of anti-infectious drugs substandard in content at the time of purchase in different SSA countries 12 such as Sudan,7 Kenya, 30 and Nigeria.9,31,32 In this study, the percentage of content substandard drugs at purchase was 20%, whereas Risha and others 13 and Kayumba and others 10 reported in their series no formulation substandard in content at purchase. In this study, the drug content at purchase ranged from 44.5% to 144.1% of the claimed content. This was because of two substandard formulations most likely caused by a manufacturer error. The presence of substandard formulations caused by a manufacturer error has also been reported by other authors and ranged from 19% to 168% of the claimed content in antimalarial drugs in the Americas. 12 Apart from manufacturer errors, the large variability in percentage of substandard drugs may also be linked to the variation in time drugs were exposed to tropical climate conditions, which was not known at the time of purchase. Indeed, after 6 months at accelerated testing conditions, the percentage of substandard antihypertensive drugs increased in this study from 20% to 80% and was higher than the 12% of substandard anti-infectious drugs from Tanzania and Rwanda. 10

This study also showed that both drug content and drug dissolution can be altered under accelerated testing conditions and that drugs being within the quality limits of drug content may have a decreased bioavailability as shown by substandard dissolution profiles. The latter was the case for atenolol (Betanorm) in this study.

Currently, a struggle to increase the global pharmaceutical market is significantly being expanded in developing countries,2 especially in SSA. During importation of new pharmaceutical products, government and/or private pharmacies rely on the stability tests that are mandatory during formulation development. 2,4,7,33 This study shows that probably not all manufacturers comply with this requirement. This is in line with the idea that substandard drug cases are under-reported and are often confused with counterfeit drugs, causing limited understanding of the extent of the problem. 19 This underlines the need for on-market drug quality monitoring.

In developing countries, governments often purchase drugs without adequate reference to quality standards. 19 In some settings, non-governmental organizations (NGOs) working in developing countries issue drug tenders without applying minimum quality assurance procedures. 19 Moreover, the capacity for technical evaluation or on-field drug quality monitoring is limited.2 The World Health Organisation (WHO) estimates that only a few countries have fully functional drug regulatory systems. 19 Even if efforts are being made, in many SSA countries, relatively simple chromatographic or pharmacopeial methods for quality verification are not routinely available 34 or used effectively. 35 Although drug registration is normally a prerequisite for purchase in resource-limited countries, authorization to register a medicine is often granted based on a simple review of documents. Obviously, the quality is impossible to assure in the absence of proper controls that at minimum would include verification of information submitted for evaluation through site inspections, review of batch documentation, and random analysis of drugs supplied. In developing countries, a pharmacovigilance system is very often lacking. The setting up of a functioning pharmacovigilance system, which allows for the rapid communication of problems and recall of harmful drugs, is a costly and complicated process that has to compete with many other pressing health system priorities in resource-limited settings. 19

The importance of substandard drugs may also be linked to low cost of those drugs, especially in the SSA settings, where the price of drugs is a major determinant of care accessibility and where drugs are paid out-of-pocket by patients.

This study has some limitations. A first limitation is the use of in vitro dissolution tests as a surrogate for in vivo bioavailability. In vitro dissolution is more rapid and much less expensive than an in vivo bioavailability study. However, whereas normal dissolution may suggest good bioavailability, 22 a substandard dissolution profile does not automatically imply a low oral bioavailability. 23 The latter should be confirmed with an in vivo bioavailability study. Another limitation may be linked to the unknown storage time and storage conditions of the drug samples before purchase that could have influenced the findings. However, because the quality of 8 of 10 formulations was sufficient at the time of purchase and most of them degraded during storage, this limitation is likely of lesser importance. In addition, non-active ingredients (excipients) or their degradation products have not been investigated in this study and may harm human health as toxic ingredients. 19 Because the packaging material of the different formulations was unknown to the authors, the possible effect of this parameter on drug stability could not be assessed. The findings from this study suggested that some pharmaceutical manufacturers do not take special measures for drugs marketed in climate Zone IVA or IVB. Risha and others 20 reported similar findings for different drug categories because several drug formulations imported into Tanzania were not optimized for stability in a tropical climate.

In this study, medicines were bought from official pharmacies where drugs are stored in the original package. Apart from official pharmacies, medicines are sold on SSA markets per tablet without the original package, thereby increasing the exposure to high humidity. It is likely that those drugs are more sensitive to quality degradation compared with the results found in this study.

Using drug content analysis and in vitro dissolution tests, 2 of 10 antihypertensive drug formulations were substandard at purchase. In addition, after 6 months of storage at accelerated testing (simulated tropical climate) conditions, 8 of 10 test drugs were substandard for the combined criteria of drug content and dissolution test, whereas none of the reference drugs became substandard. This suggests a deleterious effect of tropical climate on the antihypertensive drug in Rwanda and probably also in other SSA countries sharing the same tropical climate. In this study, the hydrochlorothiazide formulations were the most stable drug formulations. Because the use of drugs of substandard quality may alter treatment outcome, this study shows the need for on-market drug quality monitoring. 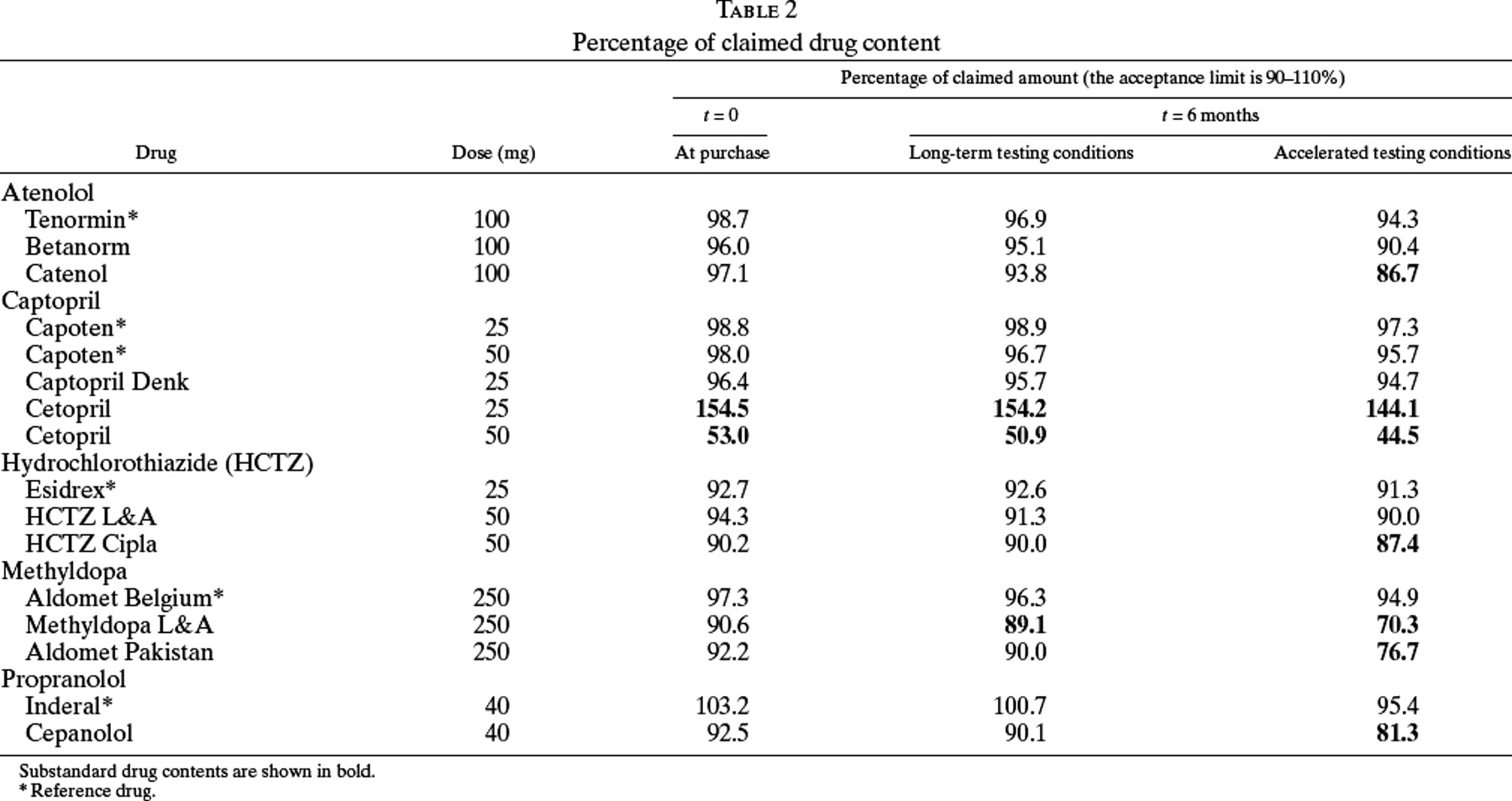 Percentage of drug released by in vitro dissolution 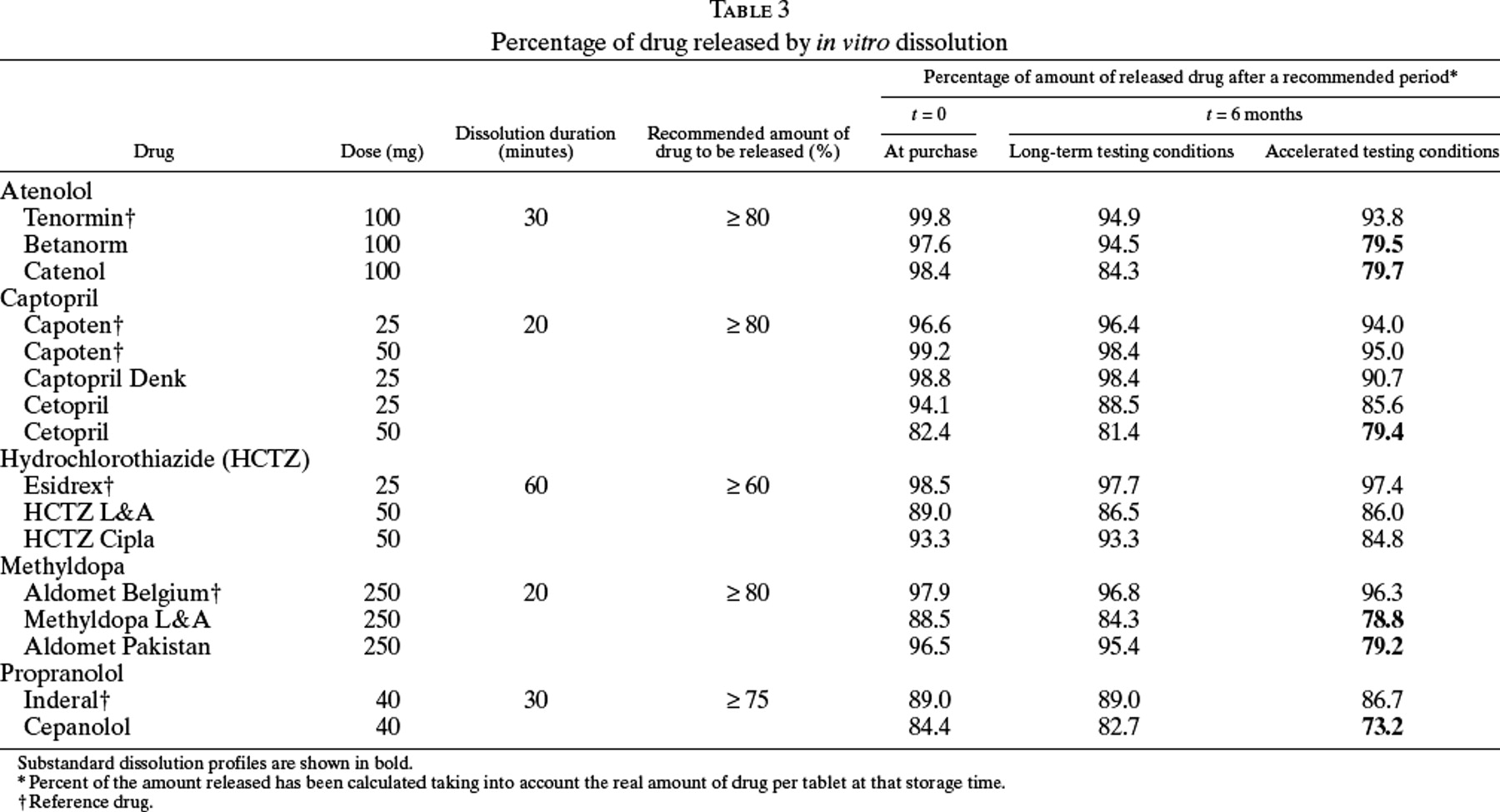 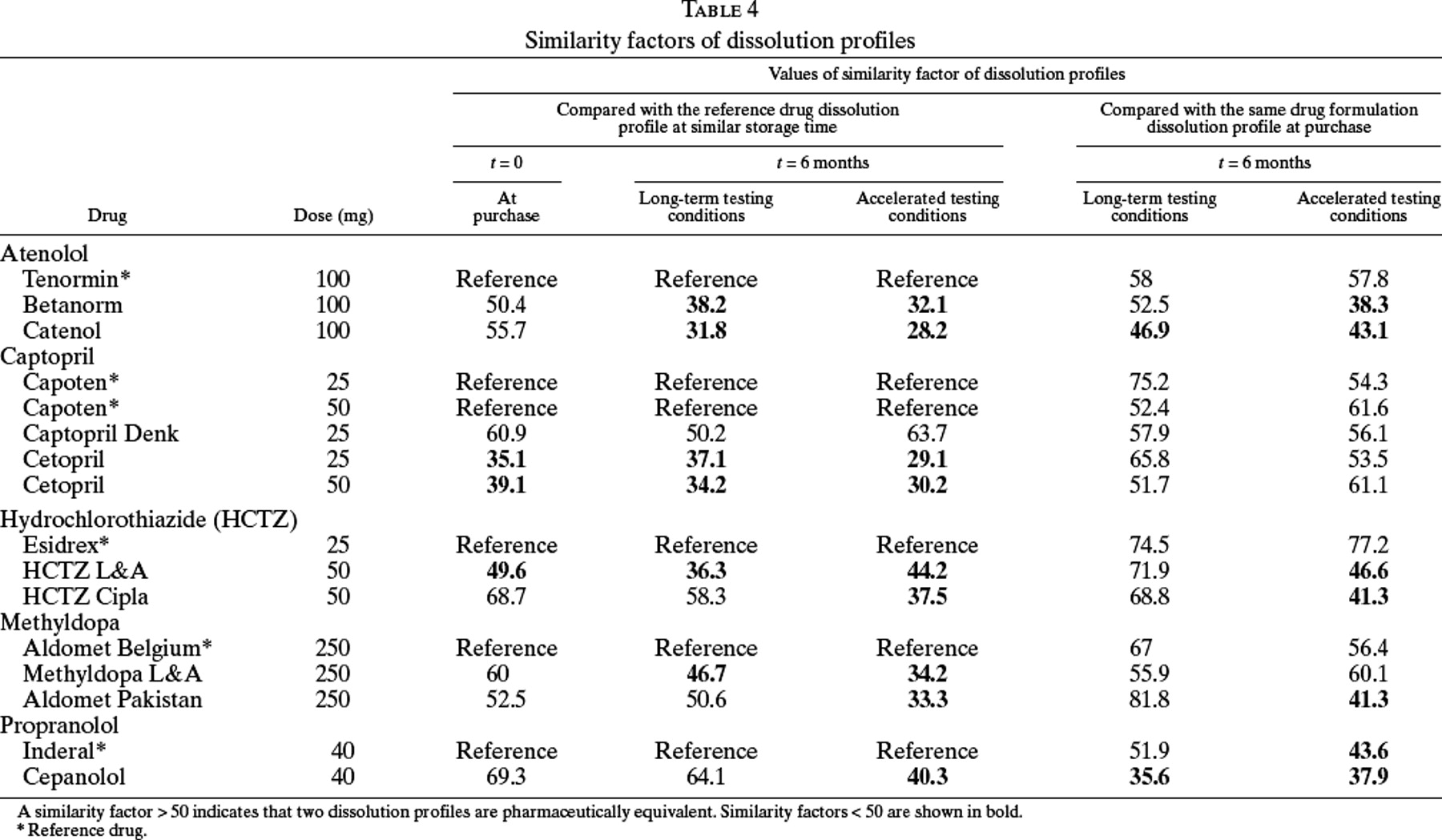