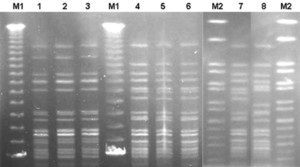 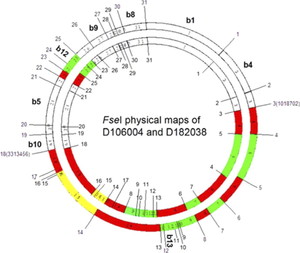 Spatial Variation of Yersinia pestis from Yunnan Province of China

During the last 2,000 years, three plague pandemics occurred, killing ~200 million people and resulting in social and economic upheavals that are unmatched by any war or other infectious disease pandemic.1 Modern plague probably originated in 1855 in Yunnan Province of China, where the disease rapidly spread to the southern coast of China, reaching Hong Kong and Guangdong in 1894; by 1900, steamships had disseminated the disease all over the world.2–6 Plague is caused by Yersinia pestis, a pathogen that circulates among susceptible rodents and spreads to humans via the bite of infected fleas. Although Yunnan Province of China is considered the site of origin for the most recent pandemic and plague strains spread around much of the world during this event, the genomic structures of Y. pestis isolates from Yunnan have never been molecularly analyzed but should provide useful information with respect to the genomic evolution of Y. pestis. In this report, we describe genomic variability among Y. pestis strains isolated from Yunnan.

Determination of the FseI sites in Y. pestis genome.

The whole genome sequences of six published strains of Y. pestis were obtained from the NCBI genome database and analyzed for rare cutting restriction enzyme sites in silico using the SeqBuilder of DNAstar software. Among the enzymes that infrequently cut the Y. pestis genome, FseI sites are scattered throughout the entire genome, and the resulting fragment lengths are moderate in size, leading us to choose this enzyme for further restriction digest analyses of the Y. pestis genomic DNA samples used in our study.

Identification of the matching Fse I sites among eight Y. pestis genomes.

Two Y. pestis isolates, D106004 and D182038, from Yunnan were sequenced by shotgun genomic sequencing by us (GenBank accession numbers: CP001585 and CP001589). The FseI site in the two newly sequenced Y. pestis and six strains previously sequenced were determined by using the SeqBuilder of DNAstar software. A 2-kb Fse I fragment that consisted of 1 kb DNA sequence upstream and 1 kb DNA sequence downstream the Fse I site was selected from each Fse I site in eight Y. pestis genome sequences. Each FseI fragment of strain D106004 was compared with all Fse I fragments of each of the remaining seven Y. pestis strains by the Megalign program to determine the counterparts of FseI fragments.

Pulse field gel electrophoresis (PFGE) was performed following the PulseNet Protocols ( http://www.cdc.gov/PULSENET/protocols.htm ). Briefly, a bacterial cell suspension (400 μL) was added to 20 μL of Proteinase K (20 mg/mL stock) and 400 μL melted 1% SeaKem Gold agarose containing 1% SDS. The suspension was mixed gently by pipetting and was immediately dispensed into a mold to prepare the plugs. The plugs were placed in a tube and incubated in a 54°C shaking water bath for 1 hour with constant agitation (150–175 rpm) to digest the bacteria. The agarose plugs in each tube were washed sequentially with 15 mL pre-warmed (50°C) sterile ultrapure water (2×) and pre-warmed (50°C) sterile TE Buffer (4×). The washings were performed by shaking vigorously in a 50°C water bath for 15 minutes.

The plugs were placed in a sterile disposable Petri dish or on a large glass slide and were cut into 2.0- to 2.5-mm-wide slices with a single edge razor blade. The plug slices were submerged into restriction buffer and incubated at 37°C in a water bath for 10 minutes or at room temperature for 15 minutes. After removing the buffer, 200 μL of restriction enzyme mixtures containing 40 U of FseI was added to each tube. The plugs were incubated in a 37°C water bath for 4 hours.

To determine the genomic variation of Y. pestis, we analyzed the genomic patterns of eight strains of Y. pestis isolated from three counties including Yulong, Jianchuan, and Midu in Yunnan Province of China. The three counties are adjacent to each other with Yulong and Midu in the north and south of Jianchuan, respectively. Jianchuan County and Yulong County were located in two plateaus and separated by a 50-km mountain area.

The PFGE patterns of strains from different sites were varied. Strains from Yulong County were different from Jianchuan County, and they all differed from a single strain (strain 33) from Midu County. Among the bands ≥ 50 kb, only nine bands were common among all the isolates (Figure 1).

To determine the molecular basis of the genetic difference, we sequenced the whole genome of strains D106004 and D182038 that were from two foci. Comparing the genomes of strains D106004 and D182038 and six Y. pestis genomes sequenced previously,7–10 we found that all Y. pestis strains had 31 FseI restriction sites except for Chinese strain 91001 and strain Nepal 516 (Table 2). Strain Nepal 516 had 29 sites and the 2 missed FseI sites were located in a pathogenic island that was deleted. Strain 91001 had an extra FseI site (number 13 FseI site). All FseI sites were located in the coding sequences of Y. pestis strains, which may explain the low mutation rate of the FseI site in the genome of Y. pestis.

A 2-kb FseI fragment of each FseI site that consisted of DNA sequences 1 kb upstream and 1 kb downstream of each FseI site from D106004 were aligned for all 31 FseI sites to determine the homology of the sequences. The homology of the sequence from all restriction sites in the D106004 chromosome was < 0.220, and the average was 0.193 ± 0.007. This indicated that all 31 FseI restriction sites were in different sequence environments.

The sequences of the 2-kb FseI fragments were compared for sequence homology in all strains of Y. pestis whose genomes were sequenced to determine the counterparts of each FseI site in all strains. The results showed that each FseI site was randomly distributed in various positions among the genomes of Y. pestis strains (Table 2). It suggested that the different positions of each FseI site among the strains were caused by the genome rearrangement of Y. pestis. The two Yunnan strains (D106004 and D182038) were closest to each other and next to CO92, an isolate from the United States (Table 2). It suggested that the Yunnan strains and the US strains share a quite recent common ancestor as suggested previously. 11

We constructed the FseI physical maps using the 2-kb FseI fragments for strains 106004 and D182038 (Figure 2). Comparing the physical maps of D106004 and D182038 showed that the most remarkable features of their genomes were inversions and/or transpositions of certain genomic fragments. Thirteen of the 31 FseI sites between D106004 and D182038 were in different orientations because of inversion of genomic sequences. Even the corresponding FseI sites in the same orientation in some FseI restriction sites were in very different positions (transposition) such as FseI sites 15 and 16. Less than one half of the FseI sites were in the same position and orientation between these genomes. These results suggested that genome rearrangement occurred in the Y. pestis genome isolated in Yunnan and the PFGE pattern difference between the Y. pestis strains from Yunnan was related to extensive genome rearrangement (Figure 2).

By comparing the closely related strains, we found that the genome rearrangement phenomenon in Y. pestis is extremely active. In the genome sequence analysis of D106004 and D182038, we found that, in fact, the Y. pestis genome is composed of many relatively independent segments. These segments themselves were highly conserved, which led to the conservative genome composition character. However, the order and orientation of the segments were different between the two strains. This suggests that the segments can be reshuffled during the replication of the genome. The Y. pestis genome seems to be unified, but the positions and orientations of independent segments within the genomes can vary without obvious changes in the biology and pathogenicity of this bacterium, as long as all segments are present.

We also showed that there is no temporal variability among Y. pestis isolates in a single endemic focus spanning a period of almost four decades by PFGE. Because PFGE only identifies major genetic variation, minor genetic variation may exist among these strains, which need to be further studied using rapidly evolving markers such as single-nucleotide polymorphisms (SNPs), variable number tandem repeats (VNTRs), and IS analyses. 13–15

Yersinia pestis strains from Yunnan Province and their genotypes

FseI restriction sites in the genomes of Y. pestis strains 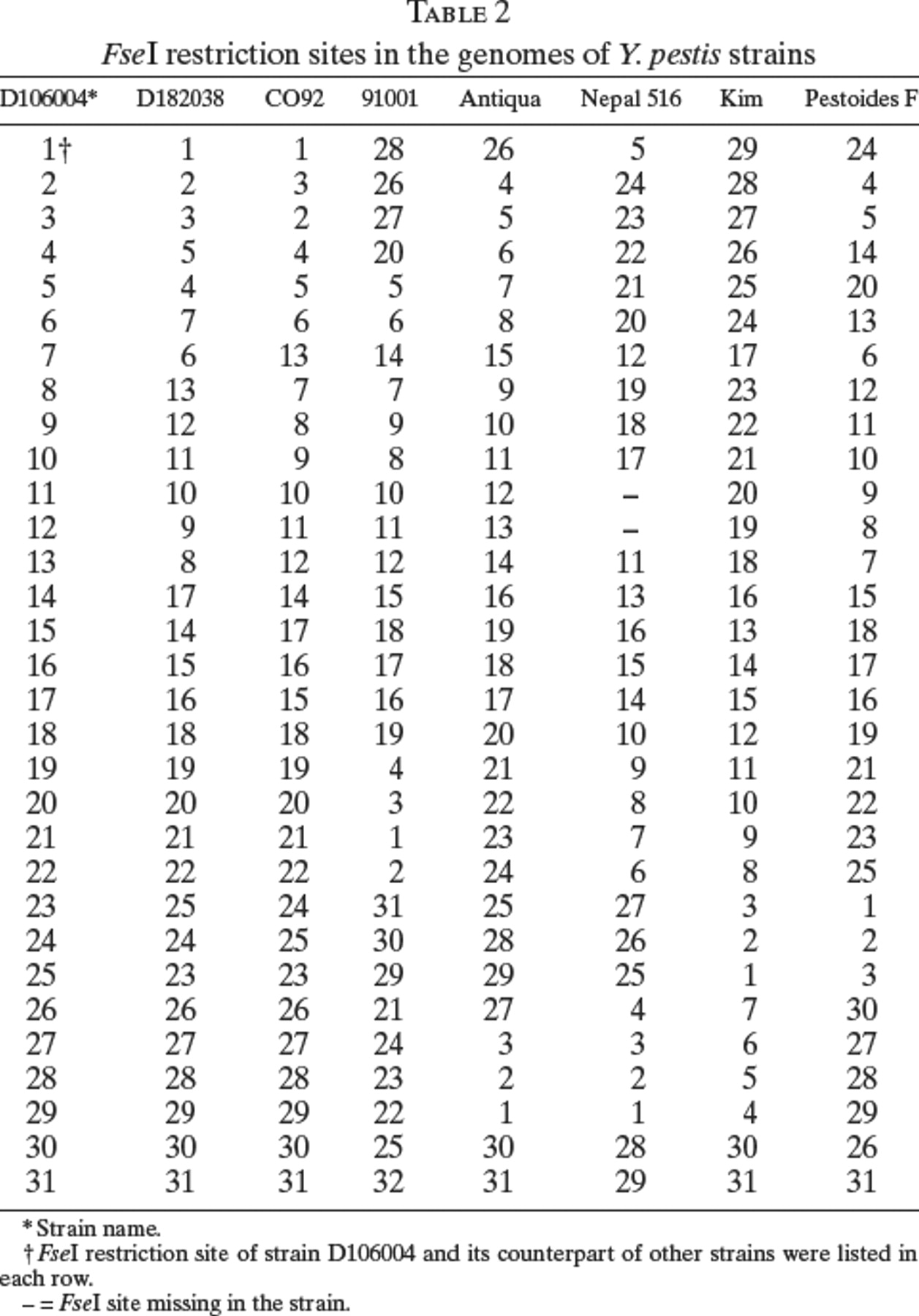