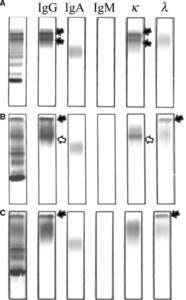 Although we have encountered many cases of monoclonal gammopathies (MGs) or oligoclonal gammopathies (OGs) in patients with Orientia tsutsugamushi infections, the clinical course of MG/OG associated with these infections has rarely been reported. We serially monitored 18 cases of MG/OG that appeared in the acute phase or early convalescent phase of scrub typhus. All MGs/OGs associated with infection with O. tsutsugamushi disappeared 7–15 weeks after treatment with doxycycline. In three cases of scrub typhus, MGs/OGs appeared before seropositive conversion (presence of antibodies against O. tsutsugamushi) and disappeared before seronegative conversion. Understanding our cases may be helpful for relevant clinical counseling and making appropriate medical decisions to avoid unnecessary invasive or cost-intensive diagnostic procedures for MGs/OGs in scrub typhus, especially in disease-endemic areas. We also suggest that 2–4 months after antibiotic treatment might be the optimal follow-up time to observe the disappearance of MGs/OGs associated with O. tsutsugamushi infections.

Monoclonal gammopathies (MGs) are a group of disorders characterized by the proliferation of plasma cells that produce a homogenous monoclonal protein. These gammopathies are commonly encountered in malignant plasma cell dyscrasia and are occasionally encountered in solid tumors, immunologic disorders, and infectious disease. 1,2 Biclonal gammopathies (BGs) have two different monoclonal proteins and occur in 3–6% of patients with MGs. Clinical findings of BGs are similar to those of MGs.1 Triclonal gammopathies (TGs) are much rarer than BGs and their incidence is unknown.3 All three gammopathies frequently require further invasive or cost-intensive diagnostic procedures, such as bone marrow examination, for proper diagnosis of the underlying disorder.

Scrub typhus is one of the most febrile diseases in the Republic of Korea, Japan, and other south Asian countries.4 We have encountered many cases of MG or oligoclonal gammopathies (OGs), including BG and TG, in patients with scrub typhus during outbreak seasons.4 However, MG or OG and their clinical course in scrub typhus have rarely been studied. Therefore, we monitored the clinical course of 18 patients with either MGs or OGs caused by infection with Orientia tsutsugamushi.

From October 2007 through March 2009, we enrolled 18 patients in whom MG/OG was detected. They were identified from a database of 247 patients who were clinically diagnosed with scrub typhus at either Wonkwang University Hospital or its branch (Kunsan Medical Center) located in southwestern Korea. In patients with MGs/OGs, we serially monitored the persistence of MGs/OGs and the titer of antibodies against O. tsutsugamushi from eight weeks to four months and reviewed their initial clinical features and laboratory results. The study protocol was reviewed and approved by the Institutional Review Board of Wonkwang University Hospital and informed consent was obtained from all patients.

Testing for antibodies against O. tsutsugamushi and gammopathies.

For detection and titration of antibodies against O. tsutsugamushi, an indirect fluorescent antibody (IFA) assay was performed as described with some modifications.5 Briefly, aliquots of diluted serum samples from patients were applied on a slide coated with antigens of four O. tsutsugamushi strains (Boryong, Gilliam, Karp, and Kato) and incubated. After washing the slide with phosphate-buffered saline, a fluorescence-conjugated antibody mixture (anti-human IgG, IgA, and IgM) was incubated with the primary antibody. After washing the slide with phosphate-buffered saline, the reaction was examined by fluorescence microscopy. The negative control reaction was defined at a serum dilution of 1:20. If a positive reaction was obtained at this dilution, twofold serial dilutions were performed to obtain the highest titer. Confirmed scrub typhus was defined in cases whose titer was ≥ 4-fold by serial IFA test.

For detection of gammopathy, serum specimens were screened by serum protein electrophoresis (SPE) using the TITAN GEL Serum Protein kit (Helena Laboratories, Beaumont, TX). If either a monoclonal or oligoclonal bands were detected by SPE, further analysis was then performed by immunofixation electrophoresis (IFE) using the TITAN GEL ImmunoFix kit (Helena Laboratories) per the manufacturer’s instructions. For detection of urinary monoclonal light chain and serial monitoring of MGs/OGs, we performed IFE.

Sex ratios and clinical features were compared by Fisher’s exact test, and ages were compared by the Mann-Whitney U test using SPSS version 13.0 (SPSS Inc., Chicago, IL). Differences were considered statistically significant when P was less than 0.05.

Eighteen (20%) of 90 patients who were clinically diagnosed with scrub typhus had MG/OG as determined by SPE (Table 1). Although the male:female ratio for those with MG/OG (9:9) was slightly higher than that for 72 patients without MG/OG (29:43), the differences were not statistically significant (P = 0.60). The median age (68 years, range = 33–80 years) of patients with MG/OG was not significantly different (P = 0.82) from that of patients without MG/OG (67 years, range = 24–88 years). Of the 18 patients with MG/OG, 14 did not have any underlying disorder that was known to be related to MG/OG. Four of 18 patients were previously diagnosed with rheumatoid arthritis, MG of undetermined significance (MGUS), hepatitis C infection, and hepatitis B infection (Table 1).

Fever was detected in all MG/OG patients. Fatigue, rash, eschar, and myalgia were detected in 94%, 78%, 72%, and 39% of patients, respectively, and the clinical features of MG/OG did not differ from those without MG/OG (fever = 100%, fatigue = 93%, skin rash = 75%, eschar = 71%, and myalgia = 44%). Clinical features and laboratory results leading to the finding of MG/OG included fatigue combined with lymphadenopathy (39%), decreased or reversed albumin/globulin (A/G) ratio (100%), lymphocytosis (61%), cytopenia (78%), and abnormal renal function (28%). The A/G ratio was reversed in 56% of MG/OG patients, and albumin was decreased (< 3.5 g/dL) in 61% of MG/OG patients during the admission period ( Table 1 ). Cranial radiographs were obtained for 16 patients, and none showed either lytic or sclerotic bone lesions.

Monoclonal gammpathy was detected in eight patients, BG was in nine patients, and TG in one patient. The cases included heavy chains of IgG, IgA, and IgM and light chains of κ and λ. IgG-κ and IgG-λ were the most common types, as observed in general MGUS or multiple myeloma. One BG patient (case 9) showed the same types of heavy chains and light chains (IgG-κ doublet) which have different isoelectric points, as shown in Figure 1A, and a similar pattern (IgG-λ doublet) was seen in a patient with TG (case 18) (Table 1).

One case of MG (case 8) and two cases of OG (case 15 and 17) were detected in persons without antibodies against O. tsutsugamushi (before conversion to a seropositive state). In three cases (cases 8, 15, and 17) with MG/OG, the MG/OG disappeared 8–10 weeks after admission in persons with high (> 1:1,000) antibody titers against O. tsutsugamushi (before conversion to a seronegative state). Additionally, in another 9 cases, MG/OG disappeared before seronegative conversion (cases 3–7, 9, 10, 13, and 18). Urine IFE was performed for 13 patients, and monoclonal light chains were observed in two cases (cases 15 and 17) during the acute phase of infection with O. tsutsugamushi (Table 1) and disappeared eight weeks after admission.

We serially monitored MG and OG in 18 patients with scrub typhus. We observed a complete resolution of all variant patterns of gammopathies that are associated with infection with O. tsutsugamushi within four months of treatment.

Scrub typhus is caused by O. tsutsugamushi, an obligate, intracellular, gram-negative organism that belongs to the class Alphaproteobacteria. Scrub typhus frequently occurs in persons who are exposed to mite-infested fields or forests.

As in some of our cases (cases 4–8, 15, and 17), in the early phase of scrub typhus, antibodies against O. tsutsugamushi may not be detected. Patients in the acute phase of scrub typhus may have fatigue and lymphadenopathy, and results of laboratory testing may show cytopenia, lymphocytosis, and a decreased or reversed A/G ratio.6–8 For such delayed seropositive conversions and clinical manifestations, SPE is required during the evaluation of patients with scrub typhus. Over the two outbreak seasons in two recent years, 18 cases (20%) of variant patterns of MG/OG, including rare patterns (same type of heavy and light chains and TG), were observed in 90 samples from patients who were clinically diagnosed with scrub typhus.3 The prevalence of MG/OG in scrub typhus was approximately 10–12 times higher than in age-matched persons who were infected with hepatitis C virus (1/60) and controls without infection (2/100) (Park DS, Cho JH, unpublished data). However, it was difficult to provide a prognosis and decide on a diagnostic approach, including the timing of serial testing, because of the absence of specific clinical information about the course of either MG or OG in patients with scrub typhus.

Monoclonal gammopathies occur in elderly, healthy persons, but are also commonly accompanied by B cell malignancies or may progress to B cell-related malignancies. 1,2 Furthermore, certain pathogens, such as human immunodeficiency virus (HIV) or hepatitis C virus, show not only a transient pattern but also a persistent pattern of MG or OG and are associated with B cell malignancies.9–16 In this context, a finding of MG or OG in certain infectious diseases requires more invasive tests to identify the underlying progress. In this study, we serially monitored peripheral blood samples for MG or OG after treatment of the infection rather than bone marrow examination during the acute or early convalescent phases to avoid any possible confusion. In the early phase of infection with O. tsutsugamushi, interleukin-6 (IL-6) and IL-10, which are associated with plasma cell growth and differentiation, are induced. 6,17 In addition, mice infected with O. tsutsugamushi show increased B cell numbers during the convalescent phase. 18 Therefore, numbers of bone marrow plasma cells may transiently increase during the acute or early convalescent phases of infection with O. tsutsugamushi. Such a finding may mislead clinicians into performing extensive, yet unnecessary, testing for other conditions.

Although we had four patients with underlying disorders (hematologic disease, autoimmune disease, and viral infection) known to be related to MG/OG, the MG/OG resolved in a similar period after doxycycline treatment as in other patients without any underlying disease.2 Additionally, their viral loads were not remarkably different during the period of infection with O. tsutsugamushi. In a known MGUS patient (case 10), one monoclonal band associated with infection with O. tsutsugamushi was resolved after scrub typhus treatment, regardless of the persistence of the other monoclonal band that existed before development of infection with O. tsutsugamushi. Therefore, we believe that all of our cases had a short-term, transient course of MG or OG that resolved after doxycycline treatment. Our cases are similar to the course of MG or OG associated with Bartonella spp. infection, which is also in the class Alphaproteobacteria.19,20 Additionally, in our cases, even an IgA type MG (case 5) completely disappeared, which is associated with a higher probability of malignant transformation compared with either IgG or IgM. 21,22

Although this follow-up study had a limited number of cases, the MG/OG that appeared in acute or early convalescent phases of infection with O. tsutsugamushi consistently disappeared after four months of treatment. Understanding our cases may be helpful for relevant clinical counseling and appropriate medical decision making to avoid unnecessary invasive or cost-intensive diagnostic procedures for frequently found MG/OG in acute scrub typhus, especially in disease-endemic areas. We also suggest that 2–4 months after antibiotic treatment might be the optimal follow-up time to observe the disappearance of MG/OG associated with infection with O. tsutsugamushi.