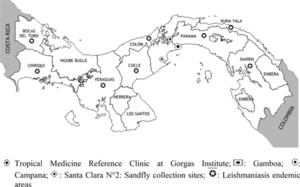 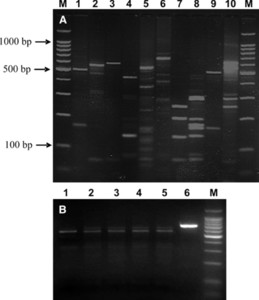 American tegumentary leishmaniasis is an increasing public health problem in Panama. This study describes the clinical characteristics and the molecular epidemiology of leishmaniasis in Panama over a 5-year period (2004–2008). Additionally, we applied a polymerase chain reaction (PCR)-restriction fragment length polymorphism (RFLP)–based assay to identify Leishmania species in clinical isolates, skin scrapings, and sandflies specimens. Whereas 60.3% of cases were detected with conventional parasitologic techniques (smear or in vitro culture), the PCR detected 72% positive patients. Our clinical-epidemiologic data corroborate the high incidence of L. (Viannia) panamensis and provide evidence of peridomestic and/or domestic transmission. Mucosal involvement was observed in 4.2% of the patients. The overall natural infection rate with Leishmania in 103 pools of sandflies was 0.46%. Lutzomyia gomezi and Lutzomya panamensis were the prevalent species incriminated as vectors at the capture sites in central Panama. This study contributes to a better knowledge of the current epidemiology of tegumentary leishmaniasis in Panama.