Percentage distribution of oocysts per positive gut for 391 lots of An. albimanus mosquitoes fed on patients infected with P. falciparum arranged at 5-day intervals of feeding after peak asexual parasite count.

Percentage distribution of oocysts per positive gut for 348 lots of An. freeborni mosquitoes fed on A. lemurinus griseimembra monkeys infected with the Santa Lucia strain of P. falciparum arranged at 5-day intervals of feeding after peak asexual parasite count.

Percentage distribution of oocysts per positive gut for 451 lots of An. freeborni mosquitoes fed on A. lemurinus griseimembra monkeys with a previous history of P. vivax infected with the Santa Lucia strain of P. falciparum arranged at 5-day intervals of feeding after peak asexual parasite count.

Percentage distribution of oocysts per positive gut for 151 lots of An. freeborni mosquitoes fed on A. nancymaae monkeys infected with the Santa Lucia strain of P. falciparum arranged at 5-day intervals of feeding after peak asexual parasite count.

Percentage distribution of oocysts per positive gut for 241 lots of An. freeborni mosquitoes fed on A. vociferans monkeys infected with the Santa Lucia strain of P. falciparum arranged at 5-day intervals of feeding after the peak asexual parasite count. 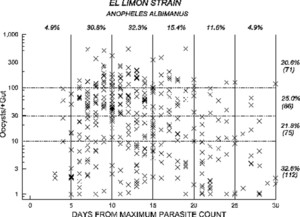 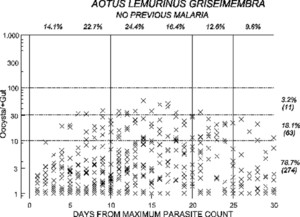 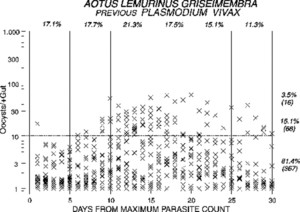 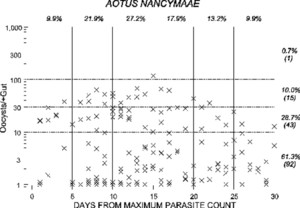 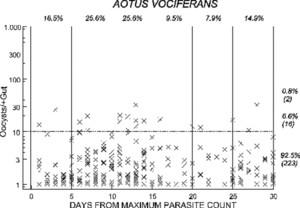 Recently, we presented a report on the development of the Santa Lucia strain of Plasmodium falciparum in four different species of Aotus monkeys from South America and the successful sporozoite-induced transmission to these monkey hosts on 100 separate occasions.1 Reported here are the results of attempts to determine the periods when mosquitoes were most likely to be infected by feeding on the three different species of Aotus monkeys and to compare these results with historical data obtained when mosquitoes were fed on humans infected with P. falciparum. Studies included determination of the levels of infection in Anopheles freeborni mosquitoes obtained by feeding on monkeys infected with the Santa Lucia strain of P. falciparum compared with the levels of infections in An. albimanus, An. quadrimaculatus, and An. freeborni mosquitoes fed on patients infected with different strains of P. falciparum. These patients were infected with these malaria parasites as part of the routine treatment of neurosyphilis that required the patients to have extended periods of parasitemia. During this time, mosquitoes would be fed to obtain sporozoites for subsequent infection of other patients. The latter archival data was collect between 1940 and 1963 when such treatment was being carried out at the South Carolina State Hospital, Columbia, SC, and the State Hospital, Milledgeville, Georgia.2–6

Consent for whatever treatments the hospital staff determined necessary for the patients was granted by the families of the patients or the courts when patients were admitted to the hospitals. The decision to infect a neurosyphilitic patient with malaria was made as part of standard patient care by the medical staff of the hospital. Patient care and evaluation of clinical endpoints (e.g., fever) were the responsibility of the medical staff. As previously reported,3 during infection, the temperature, pulse, and respiration were routinely checked every 4 hours and hourly during paroxysms (fevers) by hospital personnel. During paroxysms, patients were treated symptomatically. Infections were terminated at the direction of the attending physician. The US Public Health Service personnel provided the parasites for inoculation, monitored the daily parasite counts to determine the course of infection, provided the mosquitoes to be fed on the patients, and performed mosquito dissections and examinations. All patients undergoing malaria therapy were confined in screened wards of the hospital to prevent possible infection of local anopheline mosquitoes.

Patients were infected with one of the strains of P. falcipaum (McLendon,7 El Limon,8 Santee Cooper,9 Colombia, 10 or Thailand11). Infections were terminated by treatment with various antimalarial drugs appropriate for the particular strain of parasite. Various drugs, such as primaquine, pyrimethamine, quinine, and chlorguanide, are all capable of at least temporarily preventing mosquito infection, without permanently eliminating the infection in the human host. Patients receiving treatments that may have had an effect on mosquito infection were excluded from this analysis.

Blood-stage parasitemia was monitored and quantified by the daily examination of thick and thin blood films by the method of Earle and Perez. 12 Parasite counts were recorded per microliter of blood but were not included in this report.

Aotus lemurinus griseimembra were wild caught and imported from Colombia during periods when export was allowed from that country; after that, animals were laboratory bred. Aotus nancymaae and A. vociferans monkeys were imported from Peru; a limited number of these animals were laboratory bred. On arrival at the facility, all animals were quarantined for a 2-month conditioning period, weighed, and tested for tuberculosis. Parasitologic and serologic examination indicated that the animals were free of infection with malaria parasites before inoculation with the Santa Lucia strain, although some of the animals had been previously infected with other species of Plasmodium. All monkeys were splenectomized before exposure. All surgery was performed in an AAALAC (Association for the Assessment and Accreditation of Laboratory Animal Care International)-approved surgical suite appropriate for aseptic surgery. Protocols were reviewed and approved by the Centers for Disease Control and Prevention Institutional Animal Care and Use Committee, in accordance with procedures described in the US Public Health Policy 1986.

Monkeys generally were housed doubly or, in some cases, singly to avoid injuries caused by fighting with cage mates. Space recommendations for laboratory animals were followed as set forth in the NIH Guide for the Care and Use of Laboratory Animals. All animals were fed a diet that has been proven to provide adequate nutrition and calories in captive Aotus monkeys used in malaria-related research. Feed was free of contaminants and freshly prepared. Daily observations of the animals’ behavior, appetite, stool, and condition were recorded. All were treated as medical conditions arose by an attending veterinarian.

During periods when gametocytes were present in the blood, mosquitoes were allowed to feed on tranquilized monkeys. Mosquitoes were contained in pint-sized ice-cream carton cages and allowed to feed directly through netting on the shaved belly of the animal until engorged to repletion. After feeding, mosquitoes were held in an incubator at 25°C until examined ~1 week later for the presence of oocysts on their midguts.

The distribution of the oocysts counts per positive gut [oocysts/(+)gut] was determined at 5-day intervals beginning at the day of maximum asexual parasite count and continuing through Day 30. Included were periods of recrudescence where a secondary maximum parasite count occurred. Calculations were made only for those lots that contained at least one positive mosquito.

An examination was made of mosquito feeding records on patients infected with the four different strains of P. falciparum. The three different species of mosquitoes examined were An. albimanus, An. quadrimaculatus, and An. freeborni. In all cases, the oocyst counts per positive gut [oocysts/(+)gut] for the 1,004 positive lots of mosquitoes that fed on the patients were determined. There were 391 lots of An. albimanus, 488 lots of An. quadrimaculatus, and 125 lots of An. freeborni, which represented the dissection of 24,778 mosquitoes, of which 10,759 (43.4%) were positive.

An examination of this distribution using An. albimanus mosquitoes is shown in Figure 1. Here, the percentage distribution of lots of mosquitoes with values from 1 to 10 (35.4%) and from 10 to 30 (16.6%) = 52.0% compared with the values from 30 to 100 (29.7%) and from > 100 (18.4%) totaling 48%, which indicates that nearly one half of the lots had values of ~30 oocysts/(+)gut for the 391 positive feedings. The average for all the An. albimanus feedings was 55.71 oocysts/(+)gut. Highest level values were obtained during the Day 11–15 period after peak parasitemia (32.0%), closely followed by the 6- to 10-day period after maximum peak positive levels (30.7%). The high values may have been strongly influenced by the fact that most of the feedings were on patients infected with the El Limon strain of P. falciparum originally from Panama, which was also the origin of the An. albimanus. Co-indigenous parasites and vectors often are better suited to each other. 13

Mosquitoes were fed on three different species of Aotus (Table 2), of which 94 animals were infective to An. freeborni mosquitoes. There were 64 primary infections: 29 in A. l. griseimembra, 24 in A. vociferans, and 11 in A. nancymaae. Seventeen A. l. griseimembra, 5 A. vociferans, and 3 A. nancymaae had previously been infected with P. vivax. In addition, 5 A. vociferans had been infected with both P. vivax and heterologous strains of P. falciparum.

The distribution and intensity of infections obtained by an examination of the 1,191 positive infections (Table 2) indicated that the feeding of An. freeborni on the Santa Lucia strain of P. falciparum in all Aotus species tested resulted in 80.3% of the lots being infected at a level ≤ 10 oocysts/(+)gut; 16% were infected at a level of 10–30 oocysts/(+)gut. The highest oocyst counts were obtained during Days 11–15, followed by the feeding periods of Days 6–10 and 16–20.

The Santa Lucia strain of P. falciparum has been adapted to different species of Aotus monkeys to be used as a model for sporozoite-induced studies. 14–19 It was observed that waves of gametocytes and mosquito infection follow each new episode of asexual parasitemia. 14 Thus, a peak in the asexual parasite count was used as the starting point for each test period. This examination was made to determine which of the three species of Aotus monkeys available was the most suitable for infection using the most predictable vector available to us, namely An. freeborni. The analysis was also used to determine the time period during the infection when the highest levels of infection were most likely to occur. We examined the feedings that had been conducted on splenectomized A. l. griseimembra animals during their primary infections and on animals that had previously been infected with P. vivax. It was apparent the previous infection had little if any effect on the pattern of infection or on the intensity of infection obtained by feeding on this species of monkey. An examination of the feedings on the A. nancymaae and A. vociferans monkeys indicated a similar pattern of infection, in that the highest levels of infection occurred between Days 11 and 15 after the peak day in the asexual parasite count.

Overall, the highest level of infection was obtained by feeding on the A. nancymaae monkeys. Thus, in planning studies, one would propose to feed on A. nancymaae monkeys infected with the Santa Lucia strain of P. falciparum between Days 11 and 15 after the peak in the asexual parasite count to obtain the highest average levels of oocyst numbers.

A comparison was made with mosquito feedings on humans infected with P. falciparum to determine whether the monkey model actually reflected the pattern(s) of infection and infectivity that occurred in humans. An examination of the figures and the tables indicates a remarkable similarity in the pattern with regard to the time after the peak in the asexual parasite count when the peak mosquito infection occurs. In humans, the period of highest infection was between Days 6 and 15. In monkeys, it is also between Days 6 and 15. The major difference was the intensity of the infection obtained. It is apparent the humans were much more infective than splenectomized Aotus monkeys. Possibly, another strain or isolate of P. falciparum adapted to monkeys could prove to be a better vector–parasite strain combination. Nonetheless, we would expect the peak infection period to be similar to that of humans and expect the peak of infection to occur between 6 and 15 days after peak asexual parasite count.

Oocyst counts per positive gut in mosquitoes fed on patients infected with different strains of P. falciparum during the first 30 days after the peak in asexual parasite count

Intensity of infection (oocysts per positive gut) in lots of An. freeborni mosquitoes fed on three different species of monkeys infected with the Santa Lucia strain of P. falciparum during the first 30 days after the maximum asexual parasite count 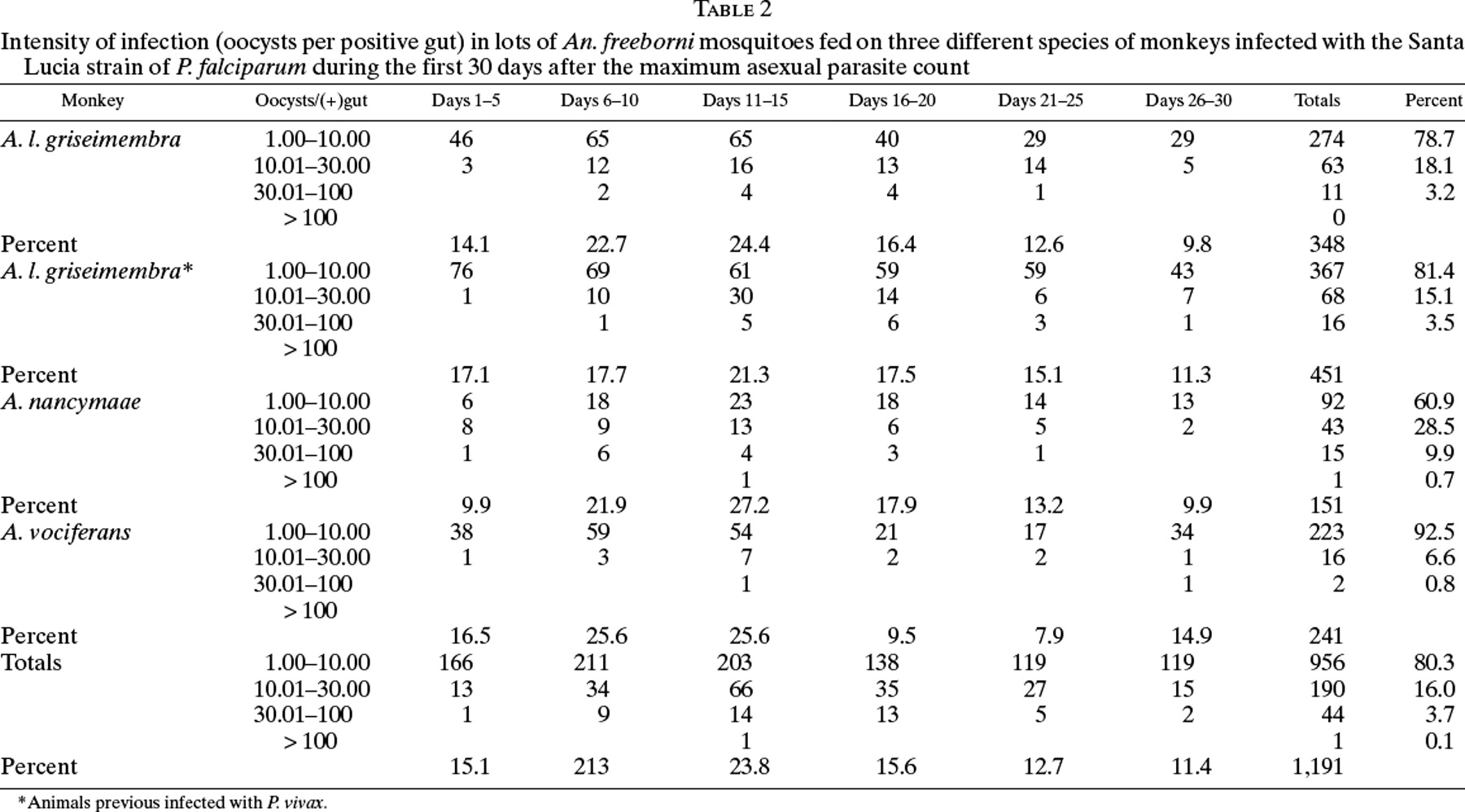