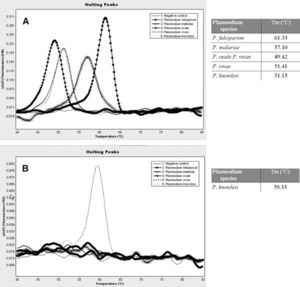 Currently, both microscopic and molecular techniques for detection of Plasmodium parasites focus on the four main species that infect humans (Plasmodium vivax, P. falciparum, P. ovale, and P. malariae). Recent studies have shown that natural transmission of the simian parasite P. knowlesi to humans occurs frequently in Southeast Asia. Plasmodium knowlesi infections were incorrectly attributed to P. malariae in 70% of cases in Malaysia because of morphologic similarity between the two Plasmodium species on stained blood smears.1–3 Microscopically, P. knowlesi resembles P. falciparum in the early trophozoite stages and P. malariae in later stages.2 Despite its morphologic resemblance to P. malariae, P. knowlesi human infection can be as severe as P. falciparum, highlighting the need for rapid and specific means of species identification.1 We previously developed a real-time polymerase chain reaction (PCR) assay that detects and differentiates between the four human Plasmodium species.4 The present study was carried out to expand this assay to include detection of P. knowlesi.

The original real-time PCR assay is carried out on a Light-Cycler (LC) instrument (Roche, Indianapolis, IN) and targets the gene for the 18S ribosomal RNA subunit of Plasmodium species. This assay includes one set of genus-specific primers (PF1: 5′-CATTYGTATTCAGATGTC-3′ (forward primer), PF2: 5′-TTCTTTTAACTTTCTCGC-3′ (reverse primer) and one set of fluorescent energy transfer (FRET) hybridization probes (one probe labeled with the donor dye fluorescein: PF3: 5′-GATACCGTCGTAATCTTA ACCATAACCTAT-3′-FL and one probe labeled with the acceptor dye red-640: PF4: LC RED640 5′-GACTAGGTGTTGGATGAAAGTG-3′). These probes hybridize to amplicons from all four human Plasmodium species. Speciation is based on differences in melting temperatures (Tm) when observed at 640 nm.4

We first determined if our current assay could detect P. knowlesi and other simian Plasmodium species. Real-time PCR was performed using the primers and probes described above (PF1, PF2, PF3, and PF4) on genomic DNA and on DNA extracted from filter paper blood spots obtained from Malaria Research and Reference Reagent Resource Center (MR4/American Type Culture Collection [ATCC]) (http://www.Malaria.mr4.org). DNA was extracted from filter paper blood spots using sterile water followed by automated extraction on the MagNA Pure LC system (Roche) as described.4 The sources of the DNA are listed in Table 1. Based on melting curve analysis, P. knowlesi was readily detected but was indistinguishable from P. vivax (Figure 1A). This finding indicates that the Plasmodium probes hybridize to P. knowlesi 18S ribosomal DNA to create a product detectable at 640 nm. Unfortunately, the melting temperature of this amplified product overlaps with that of P. vivax, preventing definitive speciation. Similarly, the amplicons of P. cynomolgi, P. inui, P. fragile, P. simiovale, and P. simium could not be differentiated from P. vivax, and P. brasilianium was indistinguishable from P. malariae. None of the simian Plasmodium species tested had melting curves similar to P. falciparum and P. ovale.

A positive-control plasmid of P. knowlesi was constructed using the genus-specific primers described4 and genomic DNA obtained from MR4/ATCC for P. knowlesi. The plasmid was purified using a High Pure plasmid isolation kit (Roche), diluted into Tris-EDTA buffer, pH 8.0, and stored at 4°C. The positive control plasmid was included in each run. The analytical sensitivity was determined by 10-fold serial dilution of the positive control plasmid and determined to be 10 copies/μL.

The results of the P. knowlesi specific assay are shown in Figure 1B. This assay is highly specific for P. knowlesi and does not detect the human Plasmodium species (Figure 1B) at 705 nm. Other simian Plasmodium species are also not detected. Although the PF3 and PF4 probes were designed to detect all species of human Plasmodium, the PK1 and PK2 probes were designed solely for the detection of P. knowlesi. Specificity was achieved by designing probes in a unique region of the P. knowlesi amplicon, which contained enough nucleotide polymorphisms to prevent annealing of the probes to other Plasmodium species. Thus, the PK1 and PK2 probes read at 705 nm provide the definitive identification of P. knowlesi that could not be achieved with the general Plasmodium probes PF3 and PF4 (read at 640 nm). The combination of the 4 probes in a single reaction enable simultaneous speciation of all 5 Plasmodium spp. when read at both 640 nm and 705 nm.

The specificity of the assay was also assessed by testing other common blood pathogens for potential cross-reactivity. These pathogens included Anaplasma phagocytophilum, Babesia microti, Bartonella species (B. henselae and B. quintana), Borrelia species (B. burgdorferi, B. afzelii, B. garinii, B. andersonii, and B. japonica), Erlichia species (E. risticii and E. canis), Staphylococcus species (S. aureus and S. epidermidis), Streptococcus pyogenes, Epstein-Barr virus, herpes simplex virus, Toxoplasma gondii, and Tropheryma whipplei. A total of 440 archived and prospectively collected clinical specimens were tested by our original assay (364 positive for Plasmodium species) and by the new assay for specificity. All 440 specimens were negative by the new assay at 705 nm.

Plasmodium knowlesi has recently been recognized as a significant human pathogen in certain settings. The potential for misidentification of this species using clinical or morphologic grounds has highlighted the need for alternate means of rapid and accurate Plasmodium speciation. In our reference laboratory, malaria infections are diagnosed by using microscopy and real-time PCR. Our PCR assay was originally designed to differentiate between P. vivax, P. ovale, P. malariae, and P. falciparum. Because this assay showed cross-reactivity between P. vivax and P. knowlesi, a new set of FRET probes for P. knowlesi was designed, tested, and shown to be 100% specific. The acceptor probe for P. knowlesi was labeled with the red-705 fluorophore to enable specific detection of P. knowlesi at 705 nm. These probes were added to our original assay for detection of P. knowlesi. The new multiplex assay detects all five species of Plasmodium at 640 nm and only detects P. knowlesi at 705 nm. This assay set-up resolves the cross-reactivity observed between P. vivax and P. knowlesi at 640 nm because P. knowlesi and not P. vivax is subsequently detected at 705 nm. The addition of the new probes to the original assay did not affect the specificity and sensitivity of the assay and will permit direct speciation of P. knowlesi without running a second reaction.

Although reports of P. knowlesi infections have been limited to Southeast Asia, 1,2,5–9 the increasing globalization of the world’s population highlights the need for rapid diagnostic tools in regions of low endemicity. 10 A recent review on the impact of migration on globalization of infectious diseases epidemiology estimates that approximately 2% of the world’s population lives in a country different from their country of origins. 10 Therefore, clinicians need to be aware of these exotic infections and consider them on their differential diagnosis. Our expanded malaria assay provides a tool for rapid and sensitive detection of P. knowlesi. 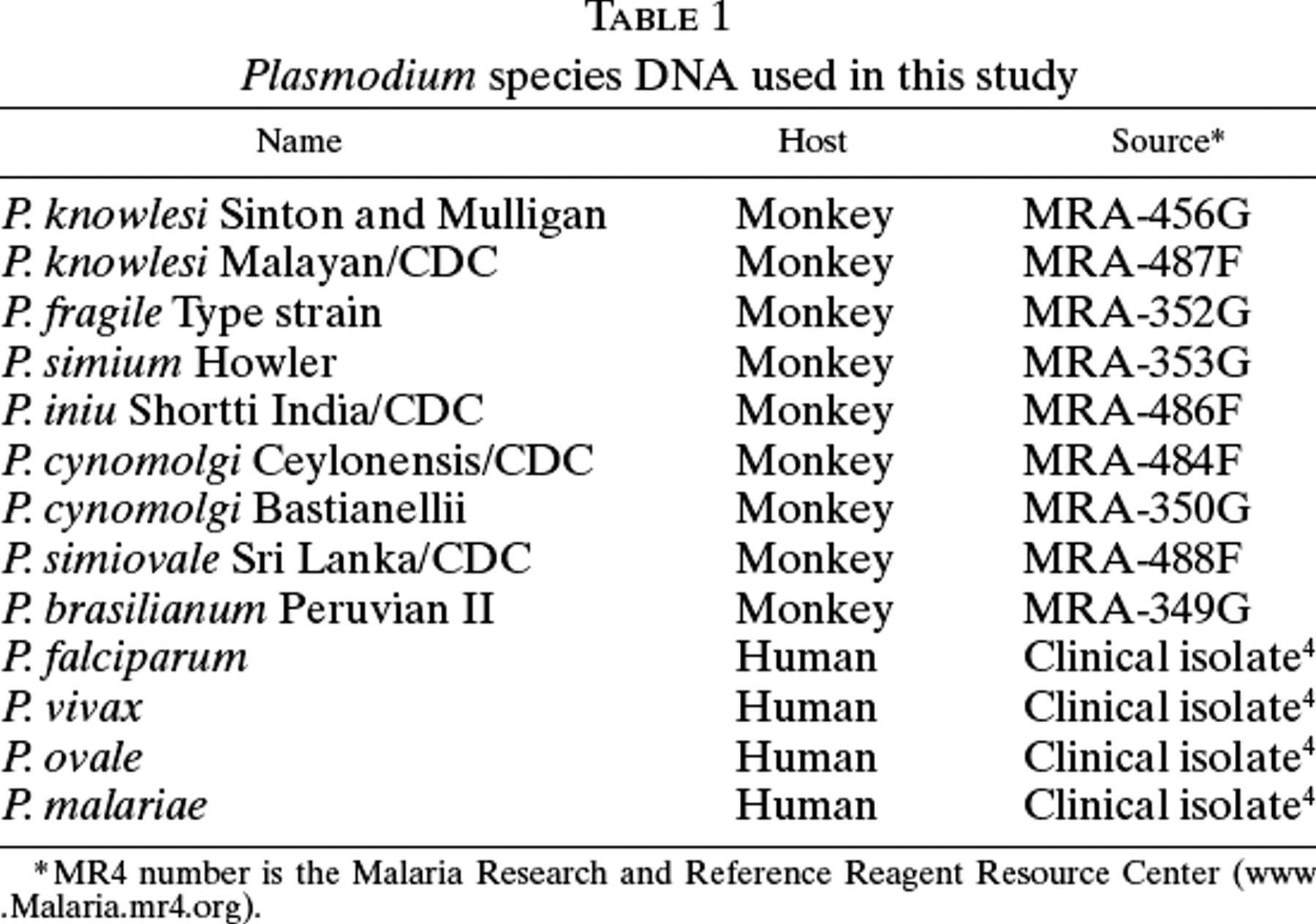