Cost-effectiveness acceptability curve depicting the probability that adding insecticide-treated bed net (ITN) distribution to antenatal clinics is cost-effective at alternative decision-making thresholds. The dashed line indicates the likelihood that adding ITNs is optimal if one is willing to pay US $15/disability-adjusted life year (DALY) (i.e., no more than the per capita health expenditures). 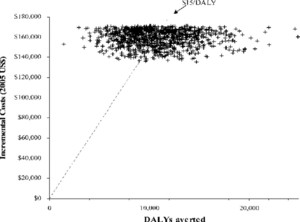 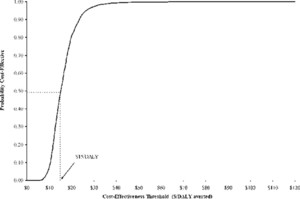 Cost-Effectiveness of Adding Bed Net Distribution for Malaria Prevention to Antenatal Services in Kinshasa, Democratic Republic of the Congo

We evaluated the cost-effectiveness of distributing insecticide-treated bed nets (ITNs) for malaria prevention at antenatal clinics in Kinshasa, Democratic Republic of the Congo. A decision tree model was used to estimate costs, outcomes, and incremental cost-effectiveness for 17,893 pregnant women attending 28 antenatal clinics who received long-lasting ITNs free of charge. Costs including purchase, transportation, storage, and distribution of ITNs were derived from program records. The ITN efficacy and other parameters were derived from peer-reviewed literature. Outcomes modeled included low birth weight (LBW) deliveries, infant deaths averted, life-years saved (LYs), and disability-adjusted life-years (DALYs) averted. Deterministic and probabilistic sensitivity analyses were conducted. For the 17,893 women in our program, ITN distribution would be expected to avert 587 LBW deliveries and 414 infant deaths. The incremental cost-effectiveness was US $17.22 per DALY averted (95% confidence interval [CI] = US $8.54–$30.90), US $15.70 per LY saved (95% CI = US $7.65–$27.68), and US $411.13 per infant death averted (95% CI = US $353.95–$1,085.89). If resources were constrained, the greatest benefit would be among women in their first through fourth pregnancies. Thus, ITN distribution is a cost-effective addition to antenatal services.