Corticosteroid and the combination of corticosteroid and antihelminthic drug are safe and beneficial in relieving headaches in patients with eosinophilic meningitis. However, clinical trials comparing the efficacies of these regimens have never been reported. We conducted a prospective, open, randomized, controlled study to compare the efficacy of the combination of prednisolone plus albendazole and prednisolone alone for the treatment of eosinophilic meningitis. Our study had 53 patients in the combined treatment group and 51 patients in the prednisolone alone group. There were no significant differences between the two groups with regard to the number of patients who still had headaches after 14 days (0 versus 1, respectively; P = 0.49) and the median length of time until complete disappearance of headache (3 versus 3 days, respectively; P = 0.32. Prednisolone plus albendazole is no better than prednisolone alone for treatment of patients with eosinophilic meningitis.

The commonest cause of eosinophilic meningitis is the rat lung worm Angiostrongylus cantonensis. Acute to subacute severe headache with nonfocal neurologic findings, with the exception of occasional involvement of a cranial nerve, are the most common symptoms.1 There is no specific treatment of this infection. Symptomatic treatment is indicated for symptoms such as headache, nausea, and vomiting. Repeat lumbar puncture is performed in patients with increased intracranial pressure. A two-week course of prednisolone, 60 mg/day, was shown to be beneficial in reliving headache.2 Recently, results of the treatment with the combination of prednisolone plus albendazole showed similar outcomes.3 There were 5 of 55 cases (9.1%) and 3 of 26 cases (11.5%) that still had headache after a two-week course of treatment with prednisolone alone and the combination therapy of prednisolone and albendazole, respectively.

Adult patients (≥ 15 years of age) who had eosinophilic meningitis and who were admitted to the Department of Medicine, Srinagarind Hospital (Khon Kaen, Thailand) and Loei Hospital, Ministry of Public Health (Loei, Thailand), were studied. The study protocol was reviewed and approved by the institutional review board and the ethics committee of Khon Kaen University. Participants gave written informed consent.

The diagnosis of eosinophilic meningitis was based on findings of ≥ 10% eosinophils in the cerebrospinal fluid (CSF), with negative results for Gram, acid-fast bacillus, and India ink staining, cryptococcal antigen testing, and culture. Patients were excluded if they had undergone previous lumbar puncture before admission or if they had altered consciousness, been pregnant or lactating, or concomitant conditions such as diabetes mellitus and serious infection.

Severity of headache was classified by use of a visual analog scale: 0 = no pain; 1–3, mild pain; 4–7, moderate pain; and 8–10, severe pain (with 10 denoted the worst pain imaginable). A CSF opening pressure ≥ 300 mm of H2O after the patient was fully relaxed was defined as high CSF pressure. The incubation period was defined as the amount of time between exposure to infective larvae from raw snails or transported hosts to the start of symptoms.

Monitor of efficacy and toxicity.

During treatment, two tablets of acetaminophen (500 mg each) were given to relieve headache every 4–6 hours if the headache persisted or recurred. Repeat lumbar puncture were conducted for patients with severe headache that was not relieved by acetaminophen.

After a baseline evaluation, patients were evaluated every day until discharge, at the end of the two-week study, and every two weeks until the patients completely recovered. At each visit, a physical examination was conducted and any adverse events were assessed and recorded. During treatment and until headache completely disappeared, frequency of acetaminophen use and repeat lumbar puncture were also recorded. Compliance was checked by the pill-count method.

The primary outcome in this study was the number of patients in the two groups who still had headache after the two-week course of treatment. The secondary outcome was the length of time until complete disappearance of headache in each of the two groups. Information obtained from the subjects and laboratories were recorded on case-record forms. Data were analyzed by descriptive statistics, Fisher’s exact probability test, and Kolmogorov-Smirnov test when appropriate.

As shown in Table 3, there were no significant differences between groups with regard to the number of patients who still had headache after 14 days of treatment (P = 0.49), the median length of time until complete disappearance of headache (P = 0.32), and the frequency of acetaminophen use in patients who had complete disappearance of headache within 14 days of treatment (P = 0.05). No serious adverse drug reactions were observed, and no cases had repeat lumbar puncture or recurrent meningitis in each group.

Infection of human by third-stage larvae of A. cantonensis commonly occurs by eating raw or inadequately cooked intermediate hosts, such as snails and slugs, or transport hosts such as freshwater prawns, frogs, and the yellow tree monitor. When third-stage larvae are ingested, they penetrate the blood vessels of the intestinal tract and are carried to the brain and meninges, where they usually die. Little is known about the effects of this parasite on the central nervous system because most patients recover uneventfully.

Pathologic changes found in autopsy reports included infiltration of the meninges and around intracerebral vessels by various proportions of lymphocytes, plasma cells, and eosinophils. Numerous tracks and microcavities were found in the brain. Numerous fourth-stage and fifth-stage Angistrongylus larvae were found in the meninges and brain tissue with a granulomatous response to dead larvae. From these findings, the pathologic mechanisms should result from directed invasion of motile worms, inflammatory responses to foreign bodies, and possible toxicity of worm excretory products.5–7

A number of serologic tests have been used to support the diagnosis of angiostrongyliasis. We found that a specific 29-kD antigen from young adult female worms may serve as a reliable marker for the diagnosis of this infection and showed a sensitivity of 55.6% and a specificity of 99.4%.4 Although 30% of our patients had negative serologic result, A. cantonensis was most likely the causative agent of eosinophilic meningitis because all patients had a history of ingestion of snails or transported hosts before the illness and had clinical manifestations similar to those in the patients described by Punyagupta et al.1

Although headache is not fatal, it is a distressing symptom that interferes with the personal and professional lives of patients. Supportive treatment, such as analgesic drugs and repeat lumbar puncture are recommended. A two-week course of treatment with prednisolone was beneficial in relieving headache, shortened the median time until resolution of headache, and reduced the need for repeat lumbar puncture. The number of patients who still had headaches after 14 days of treatment was 9.1% and the median length of time until complete disappearance of headache was 5 days.

The results of our study demonstrate that there are no significant differences in clinical outcomes between the combined treatment group and prednisolone alone group. Up to now, the role of antihelmintic agents is still inconclusive. Thiabendazole and albendazole were ineffective in treatment of patients with angiostrongyliasis. 8,9 Thus, the results of combined therapy should be caused by the dramatic effect of prednisolone.

Our study had two limitations. First, the study design was an open clinical trial that may affect the ability for unbiased scoring of headache evaluation. However, we reduced this issue by using combination of subjective evaluation and visual analog scale to assess headache symptom. Second, because of the low rate of enrollment during the study period, the numbers of subjects in each group were lower than expected.

In conclusion, a two-week regimen of prednisolone alone is safe and effective in treatment of patients with eosinophilic meningitis caused by A. cantonensis. Thus, the combination of prednisolone and an antihelmintic drug is not necessary.

Comparison of initial clinical features between patients treated with prednisolone plus albendazole and prednisolone alone for eosinophilic meningitis, Thailand* 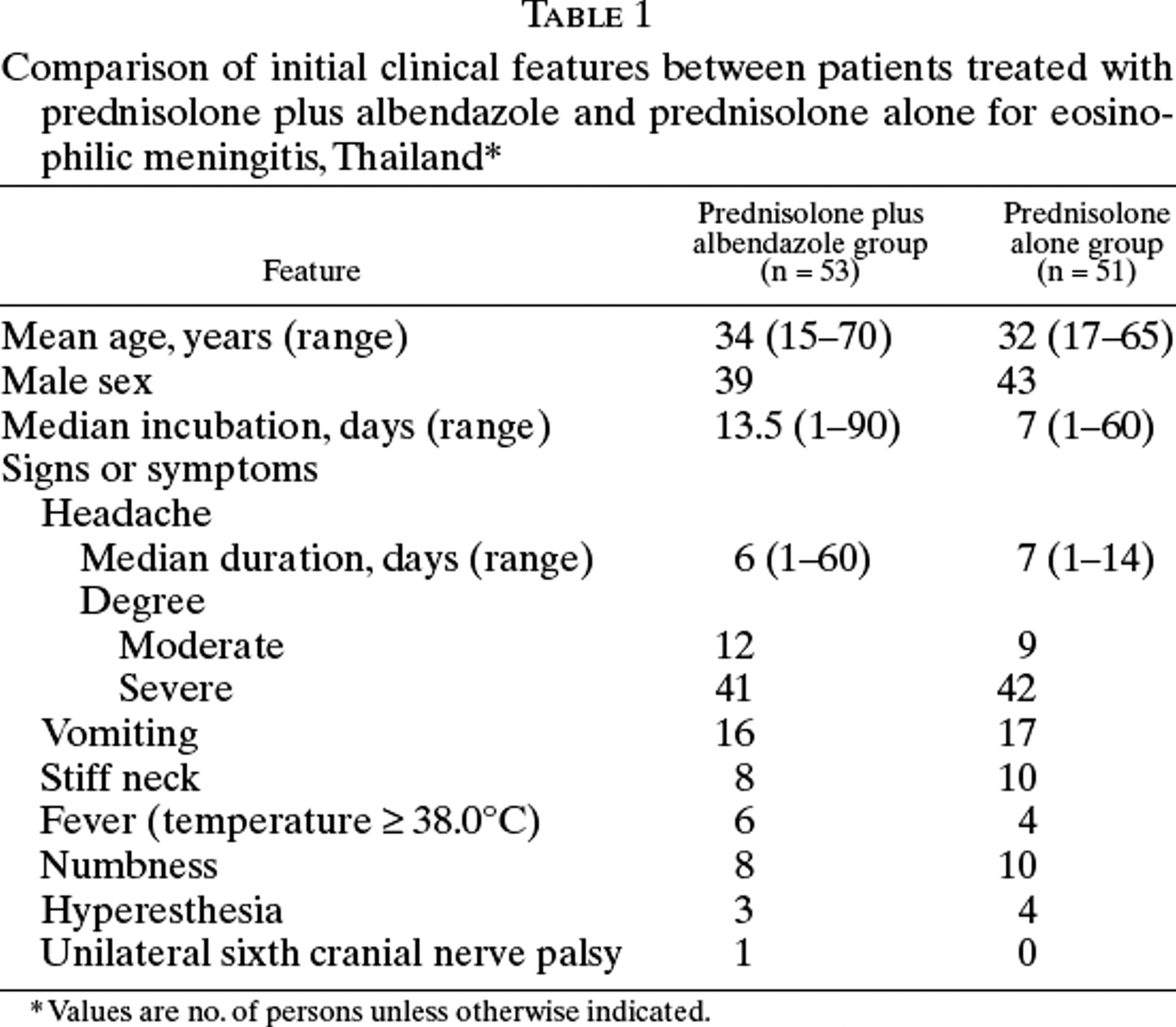 Comparison of initial laboratory features between patients treated with prednisolone plus albendazole and prednisolone alone for eosinophilic meningitis, Thailand* 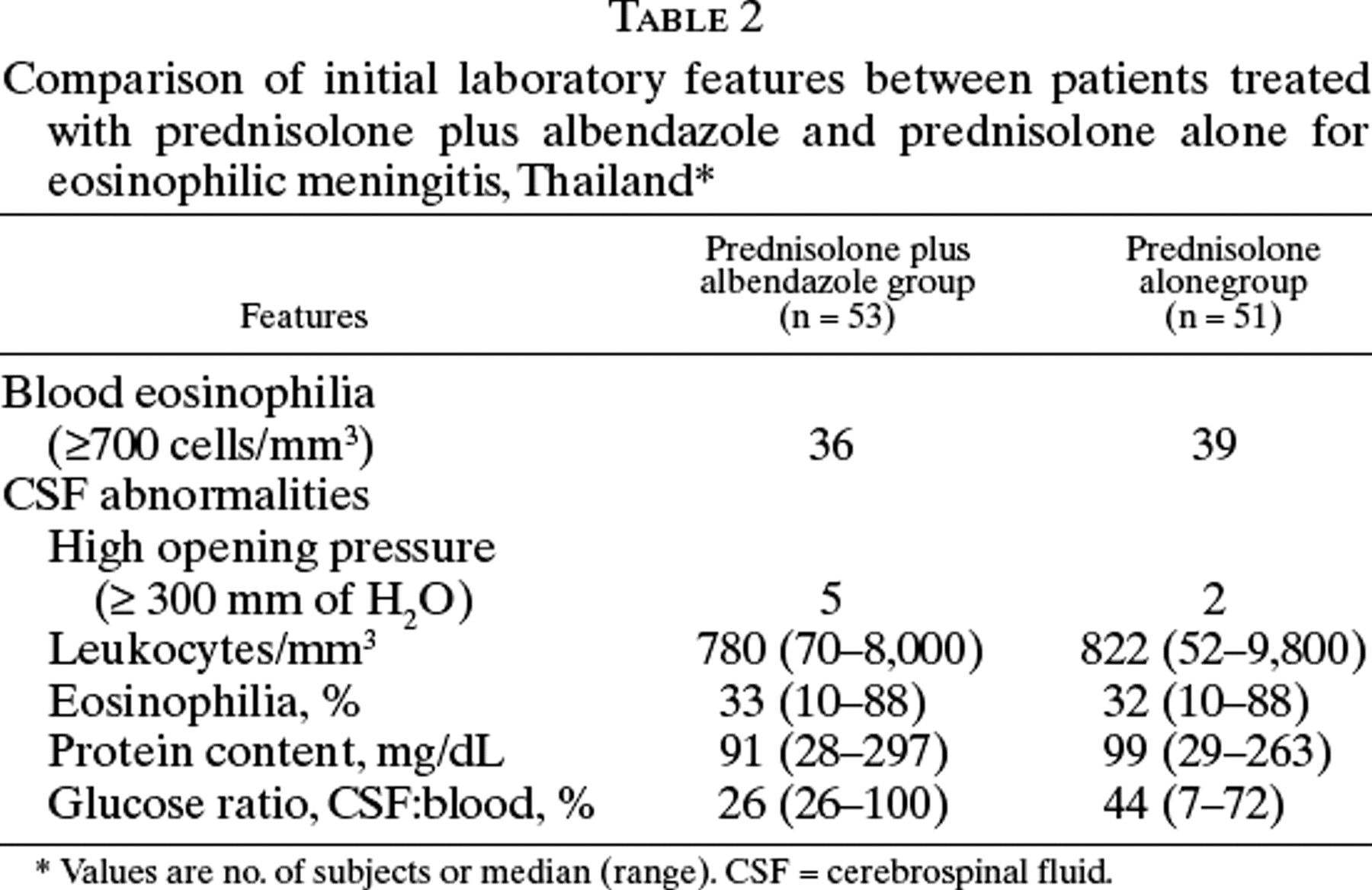 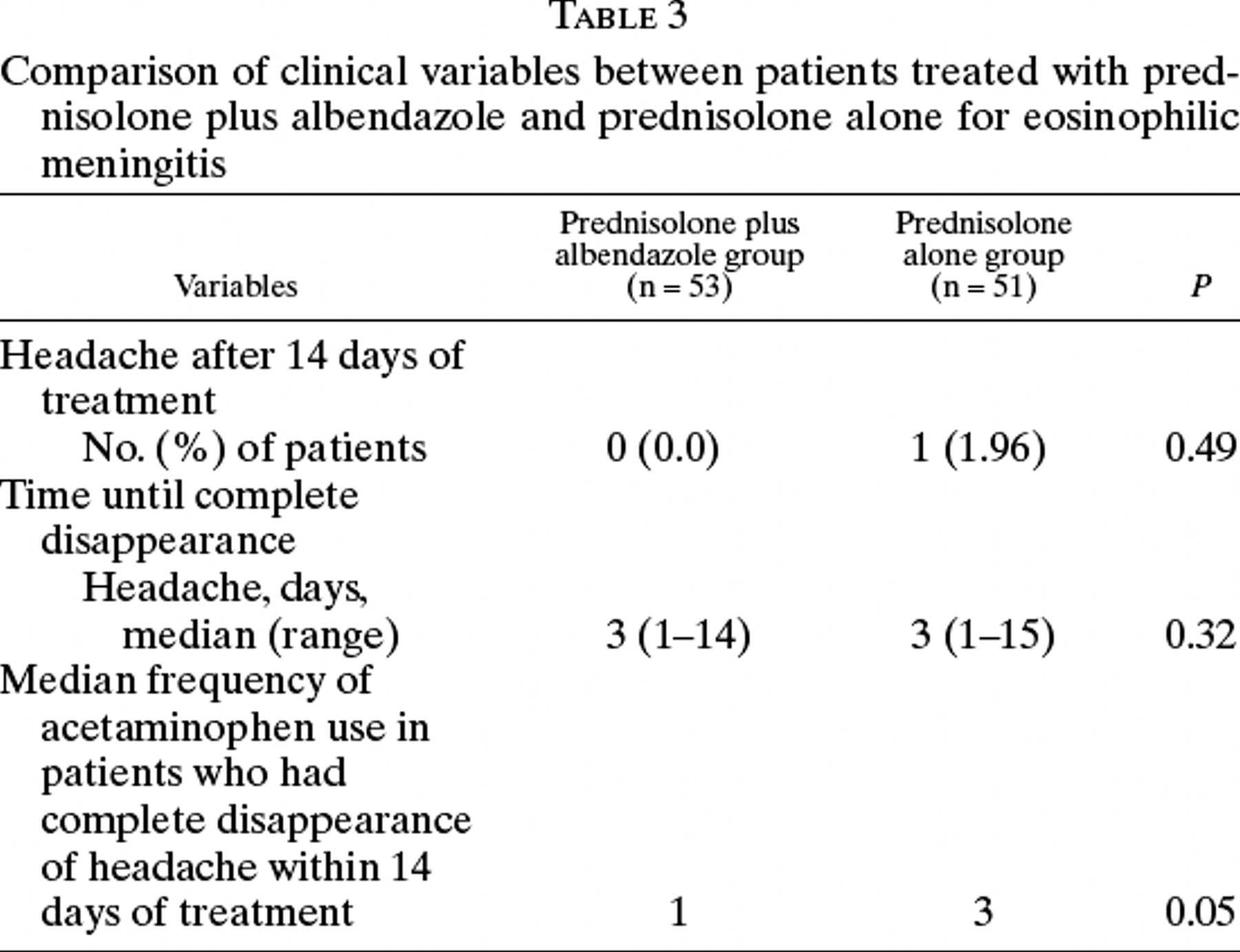