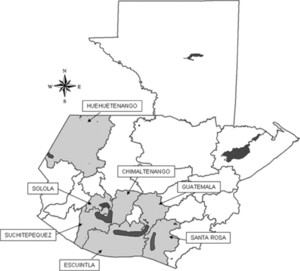 Onchocerciasis (river blindness), which is close to being eliminated from Guatemala through semiannual administration of ivermectin, is still transmitted in one area of the country that coincidentally receives an annual influx of migrant workers to harvest coffee. Migrant workers generally are not included in semiannual ivermectin treatments, but if infected could serve as a reservoir. We report on two studies undertaken to measure the exposure to onchocerciasis (presence of IgG4 antibodies to a recombinant Onchocerca volvulus antigen, OV-16) among migrant workers. During two coffee harvest seasons, 170 migrant workers with a history of working in the disease-endemic area were tested and 1 (0.6%, 95% confidence interval = 0–3.2%) was seropositive. This low rate of exposure in migrant workers indicates that they are unlikely to play a significant role in transmission of onchocerciasis and may indicate that transmission in the last remaining disease-endemic area of Guatemala is decreasing significantly.