TBCA2 was localized using Axophor red in trypanosomes34 (A) and the nuclei and kinetoplasts of the parasites stained blue with DAPI (B). A and B were merged to show co-localization (C). Cells were embedded in Vectashield and viewed with a confocal-microscope imaging system (Olympus). This figure appears in color at www.ajtmh.org.

Splenic immune T cells were isolated 6 weeks after immunization and stimulated with TBCA2 in vitro to analyze Th1 (A) and Th2 (B) cytokine production. The vaccine construct significantly induced elevated antigen-specific Th1 cytokines: IL-2, IFN-γ, and TNF-α. However, the amounts of IL-4 and IL-10 production by splenic T cells from vaccinated mice were not significantly different (P = 0.25 and P = 0.07, respectively) from control mice. Bars represent SD of three experiments (**P < 0.01). 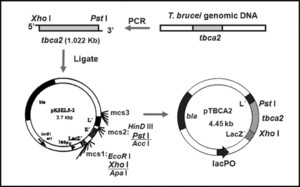 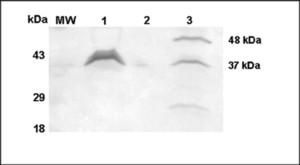 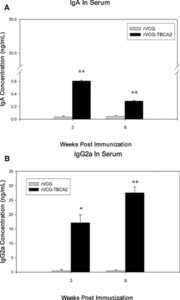 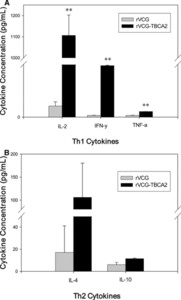 Human African trypanosomiasis is a neglected disease caused by Trypanosoma brucei spp. A parasite cation pump (Ca2+ ATPase; TBCA2) essential for survival and cation homeostasis was identified and characterized. It was hypothesized that targeting this pump using a Vibrio cholerae ghost (VCG)-based vaccine could protect against murine T. brucei infection. mRNA and protein expression of TBCA2 was differentially expressed in blood and insect stages of parasites and immunolocalized in the pericellular membrane and the flagellar pocket of bloodstream forms. Antigen-specific antibodies and Th1 cytokines, interleukin-2, interferon-gamma, and tumor necrosis factor-alpha were induced in rVCG-TBCA2-immunized mice and in vitro on antigen stimulation of splenic immune T cells, but the corresponding Th2-type response was unremarkable. Despite an increased median survival of 6 days in vaccinated mice, the mice were not protected against infection. Thus, immunization of mice produced robust parasite-specific antibodies but failed to protect mice against parasite challenge.