The northeast state of Nuevo León (enlarged area). The city of Monterrey is located in the square, which is the metropolitan area. 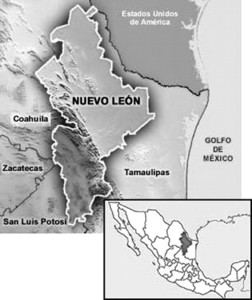 Chagas disease has become frequent in non-endemic areas, where it can be transmitted by blood transmission. Therefore, we explored seroprevalence of anti-Trypanosoma cruzi antibodies among blood donors at the Cardiology Hospital, Mexican Institute of Social Security at Monterrey, Nuevo León, by both an enzyme-linked immunosorbent assay and indirect hemagglutination. Blood samples from 1,000 healthy blood donors were selected. A seropositivity of 2.8% was shown among the studied population, of which 2.59% (21/809) were inhabitants of Nuevo León, whereas 3.07% (2/65) and 3.96% (5/126) were from Coahuila and Tamaulipas, respectively. Our result is higher than that of a previous study from 1998, where a prevalence of 0.5% was reported. This once again corroborates the importance of installing a surveillance program to detect and prevent the transfusion of T. cruzi from asymptomatic blood donors in blood banks located in urban cities recognized as non-endemic.