Geographic location of the indigenous communities in the Sierra Nevada de Santa Marta, Colombia, in an altitudinal gradient on the river basin of the Palomino River with its respective ethnic groups. 1: Manzanal (koguis); 2: Kasakumake (Wiwas); 3: Gumake (Arhuacos), and 4:Umandita (Koguis).

Three percent Agarose gel electrophoretic analysis of the signatures obtained by minicircle low-stringency single primer-polymerase chain reaction (LSSP-PCR) of Trypanosoma cruzi samples from patients, vectors, and reservoirs. The patient samples are represented by the letters G (Gumake), U (Umandita), K (Kasakumake), and M (Manzanal), indicating the community to which they belong and followed by its respective code. The samples of vectors are represented by the letter V and reservoirs by the letter R. (A) Profiles that are heterogeneous between T. cruzi samples from patients, vectors, and reservoirs. (B) Profiles shared among samples of T. cruzi. M: 50-bp ladder molecular-weight marker.

Hybridization patterns representative of amplified products of the hypervariable regions of kDNA from patient samples of the four indigenous communities in the Sierra Nevada de Santa Marta (SNSM). (A) V25 probe isolated from Rhodnius prolixus from Gumake. (B) V53 probe isolated from Triatoma dimidiata from Gumake. M: 100-bp molecular-weight marker; G78, G127, G130, G188, and G193: patients from Gumake; K1, K4, K41, K42, and K43: patients from Kasakumake; U9, U10, U12, U17, and U21: patients from Umandita; M1, M14, M23, M24, and M35: patients from Manzanal. The upper part of the figure shows the ethidium bromide-stained 1.5% agarose gel, on which the amplicons were electrophoresed.

Model of genetic flux of Trypanosoma cruzi populations that circulate in the four indigenous communities of the Sierra Nevada de Santa Marta (SNSM) in patient, vector, and reservoir samples based on the results obtained. 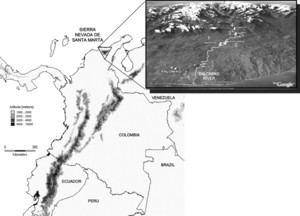 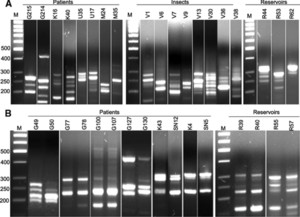 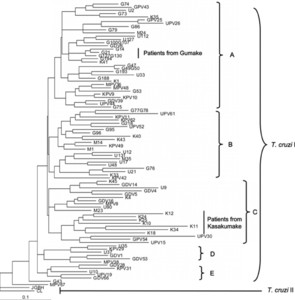 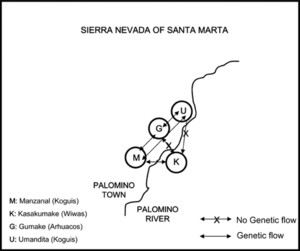 This study attempted to evaluate the transmission dynamics of Trypanosoma cruzi in four indigenous communities of Sierra Nevada de Santa Marta (SNSM), Colombia. Low-stringency single primer-polymerase chain reaction (LSSP-PCR) of the minicircles and Southern blot analyses were used to characterize samples from patients, vectors, and reservoirs in these communities. The LSSP-PCR profiles revealed a high genetic variability but with similarities among the parasites present in the samples of vectors, patients, and reservoirs of the same and different communities. Cluster and analysis of molecular variance (AMOVA) analyses of data derived from LSSP-PCR and Southern blot suggest a gene flux among populations of T. cruzi circulating in patients, vectors, and reservoirs. The results support the idea that the domestic and wild transmission cycles overlap in the SNSM, with Rhodnius prolixus as the main vector and Triatoma dimidiata playing an important role in the transmission of Chagas disease in this zone, making the vector control strategy by spraying unsuccessful.