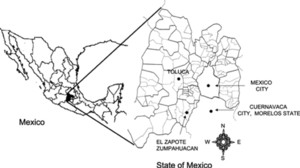 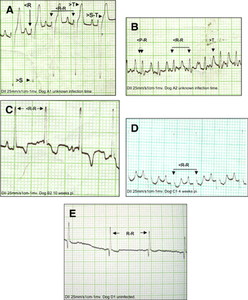 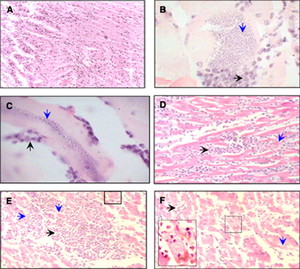 With an estimated 18 million people infected with Trypanosoma cruzi, and 25% of the population at risk, Chagas disease is endemic in Latin America.1–3 In Mexico, ~5.8 million people might be infected with T. cruzi.4,5 The State of Mexico, located in the central highlands of the country, was considered free of T. cruzi until 1998. However, we documented T. cruzi– specific antibodies in 7.1% of humans and 21% of dogs from rural areas of the State of Mexico6 and noted that detailed epidemiologic information is needed to understand the true impact of Chagas disease in these areas.

In this study, we isolated T. cruzi from triatomines collected from Zumpahuacan municipality of the State of Mexico and aimed to evaluate its virulence in dogs. We examined physical, clinical, and histopathologic aspects in dogs that were naturally infected or experimentally infected with the Zumpahuacan isolate of T. cruzi. We chose dog as an experimental model because they are an important domestic reservoir host 7,8 and should be an excellent model to study Chagas disease.9–15

Twelve of 57 mongrel dogs collected in Zumpahuacan municipality tested positive for anti-T. cruzi antibodies by indirect hemagglutination (IHA) test and enzyme-linked immunosorbent assay (ELISA) and were considered naturally infected (21% prevalence). Apart from cardiomyopathy, no signs of infections related to other cardiomyopathic diseases (e.g.,ringworm) were noticed during clinical evaluation, necropsy, and histologic studies, and these dogs were considered affected by Chagas disease only.

For experimental infection, dogs (2 months old) were acquired locally and kept at the research center until used for challenge infection at 8 months of age. Dogs were confirmed serologically negative for T. cruzi–specific antibodies by IHA and ELISA and treated with anti-helminthics and vaccines against regional infectious diseases (canine distemper, parvovirus, canine hepatitis, leptospirosis, and rabies). All dogs received water ad libitum and commercial dog food according to age and development requirements. Experimental protocols were conducted according to Norma-Official-Mexicana (NOM-0062-ZOO-1999) technical specifications for the care and use of laboratory animals.

Trypanosoma cruzi (Sylvio-X10) was purchased from American Tissue Culture Collection. A native T. cruzi isolate was obtained from Triatoma pallidipennis collected from El Zapote village of Zumpahuacan municipality, located in the southern State of Mexico (Figure 1). Triatomines feces were examined for epimastigotes by light microscopy, 16 and positive samples were diluted in PBS and intraperitoneally injected in Balb/C mice. Blood trypomastigotes were collected by cardiac puncture at Day 14 post-infection (pi). Parasites were purified by Ficoll gradient, seeded on a monolayer of NIH3T3 cells, and cultured and propagated at 37°C, 5% CO2 in DMEM media (pH 7.2) supplemented with 2% FBS, 8 μg/mL ampicillin, and 0.1 mg/mL pyruvate (Gibco/Invitrogen, Grand Island, NY). The native isolate was named “Zumpahuacan.”

Changes in cardiac rhythm and conduction were monitored each week (for 10 weeks pi). The EK-8 electrocardiographic machine (Burdick Stylus, Milton, WI) was set at 120 V, 60 H, 20 amps, and 25 W, and six leads were considered at 25 mm/s at 1 mV, standardized to 1 cm for this study.

Necropsy was performed when dogs died because of infection or after humanitarian sacrifice, and macroscopic and microscopic analysis of affected organs was performed. Animals were euthanized according to the Norma Official Mexicana guidelines (NOM-033-ZOO-1995). Tissue samples were fixed in 10% formalin, dehydrated, and embedded in paraffin. Tissue sections (5 μm) were stained with hematoxylin and eosin and evaluated by light microscopy.

The Zumpahuacan- and Sylvio-X10–infected experimental dogs developed a brief febrile episode during 5–16 dpi. No other signs of clinical illness were apparent in experimentally infected and healthy control dogs during the daily physical exam. The naturally infected dogs showed no fever during the observation period. Dogs infected with Sylvio-X10 died at day 29 and 30 pi.

Electrocardiograms were obtained at weekly intervals. The Zumpahuacan-infected dogs exhibited discrete EKG abnormalities. These included, at 4 weeks pi, a reduction in S-T segment below 0.2 mV and a premature ventricular contraction (Figure 2C), indicative of ischemia and arrhythmia, respectively, that evolved toward EKG normalization by 8 weeks pi. Sylvio-X10–infected dogs exhibited sinus tachycardia at 4 weeks pi (Figure 2D) and died thereafter. Naturally infected dogs showed the most evident EKG alterations, including a reduced R-wave voltage, a deep S-wave, a ST-segment increase > 0.15 mV, and a T-wave increment that are indicative of pericardial effusion, right-atrium enlargement, and ischemia. Some naturally infected dogs also exhibited reduced P-R and R-R intervals and sinus tachycardia (Figure 2A and B). No EKG abnormalities were observed in healthy controls (Figure 2E).

We showed that experimental infection with the Zumpahuacan isolate produced an acute to indeterminate stage of infection that was also noted in naturally infected dogs from the rural areas of the State of Mexico. Infection of dogs with the Sylvio-X10 strain resulted in a lethal phenotype.

We performed an initial characterization of a canine model of acute chagasic myocarditis and indeterminate asymptomatic disease. We used Sylvio-X10 as a reference strain because it has been widely characterized in mouse models and proven to be pathogenically stable after many passages in in vitro culture. 19,20 Infection of dogs with Sylvio-X10 was highly pathogenic; the symptoms of acute myocarditis and sudden death in Sylvio-X10–infected dogs resembled what has been noted in other hosts infected with virulent T. cruzi strains.21,22 Dogs experimentally infected with the Zumpahuacan isolate exhibited acute myocardial disturbances evidenced by electrocardiographic analyses. Naturally infected dogs showed clinical and pathologic signs of chronic Chagas disease. These data suggest that T. cruzi strains circulating in southern State of Mexico are able to produce various stages of Chagas disease. 14

The interpretation of dog EKG readings according to Tilley 23 and Sisson and others 24 provides clues to clinical outcome of infected dogs. The Zumpahuacan-infected dogs exhibited conduction abnormalities (myocardial hypoxia, premature ventricular contraction, and sometimes sinus tachycardia) at 4 weeks pi that were normalized by 8 weeks pi, indicating the development of a clinically asymptomatic indeterminate stage. In comparison, Sylvio-X10–infected dogs exhibited sinus tachycardia and cardiac hypertrophy that likely contributed to diastolic insufficiency and myocardial hypoxia. We surmise that inability of the heart to compensate for conduction abnormalities resulted in acute myocardial hypoxia and sudden death in Sylvio-X10–infected dogs.

The notion of differential EKG abnormalities in dogs infected with various T. cruzi strains is supported by others. For example, no EKG alterations and pathologic changes were detected in dogs infected with 147 and SC-1 isolates,15,25 whereas 12SF-, Colombian-, or Be-78–infected dogs exhibited bradycardia, T-wave inversion, low-voltage QRS, S-T irregularities, or right bundle branch block (RBBB). 26–28 Others showed decreased QRS voltage, repolarization disturbance, axis deviation, and indeterminate-rhythm in some, but not all, infected dogs. 13 In our study, naturally infected dogs exhibited pericardiac effusion, right-ventricle enlargement, and myocardial hypoxia or right-ventricle and -atrium enlargement, accessory electric conduction defect, and sinus tachycardia. The extent of cardiomegaly and right-ventricle dilation was moderate in Sylvio-X10– and Zumpahuacan-infected dogs and mild-to-severe in naturally infected dogs. Overall, these data support the view that parasite strains, route of delivery, and number of injected parasites contribute to the differential clinical outcome of disease in T. cruzi–infected dogs.

Lesions related to cardiomyocyte fibrosis/necrosis are routinely detected in acutely infected dogs. 13,29 Similarly, lesions consisting in damage to cell membrane, phlogistic aspect of cardiomyocytes, and fibrosis/necrosis have been reported in dogs 28 and human patients in the indeterminate infection phase. We noted necrotic lesions representative of degenerative processes in cardiac tissue of infected dogs. Perimysial and endomysial lymphoplasmacytic infiltration in the heart of infected dogs was probably caused by evolution of adaptive immune responses and inflammatory processes that induce hyalinization and fibrosis. Others have reported the presence of myocardial necrosis 14,15 and inflammatory infiltrate 27,28 associated with fibrosis in dogs in indeterminate phases of T. cruzi infection and disease, thus providing support to our observations.

In summary, we showed that acute myocarditis and symptoms of indeterminate chronic Chagas disease develop in dogs experimentally or naturally infected with T. cruzi isolates from southern State of Mexico. Further studies evaluating the pathogenicity of Zumpahuacan and other isolates in dogs would advance the development of a canine model of Chagas disease and enhance our understanding of the risk of T. cruzi infection and its potential impact on inhabitants in this region of Mexico.

Necropsy and histopathology alterations in dogs naturally or experimentally infected with T. cruzi 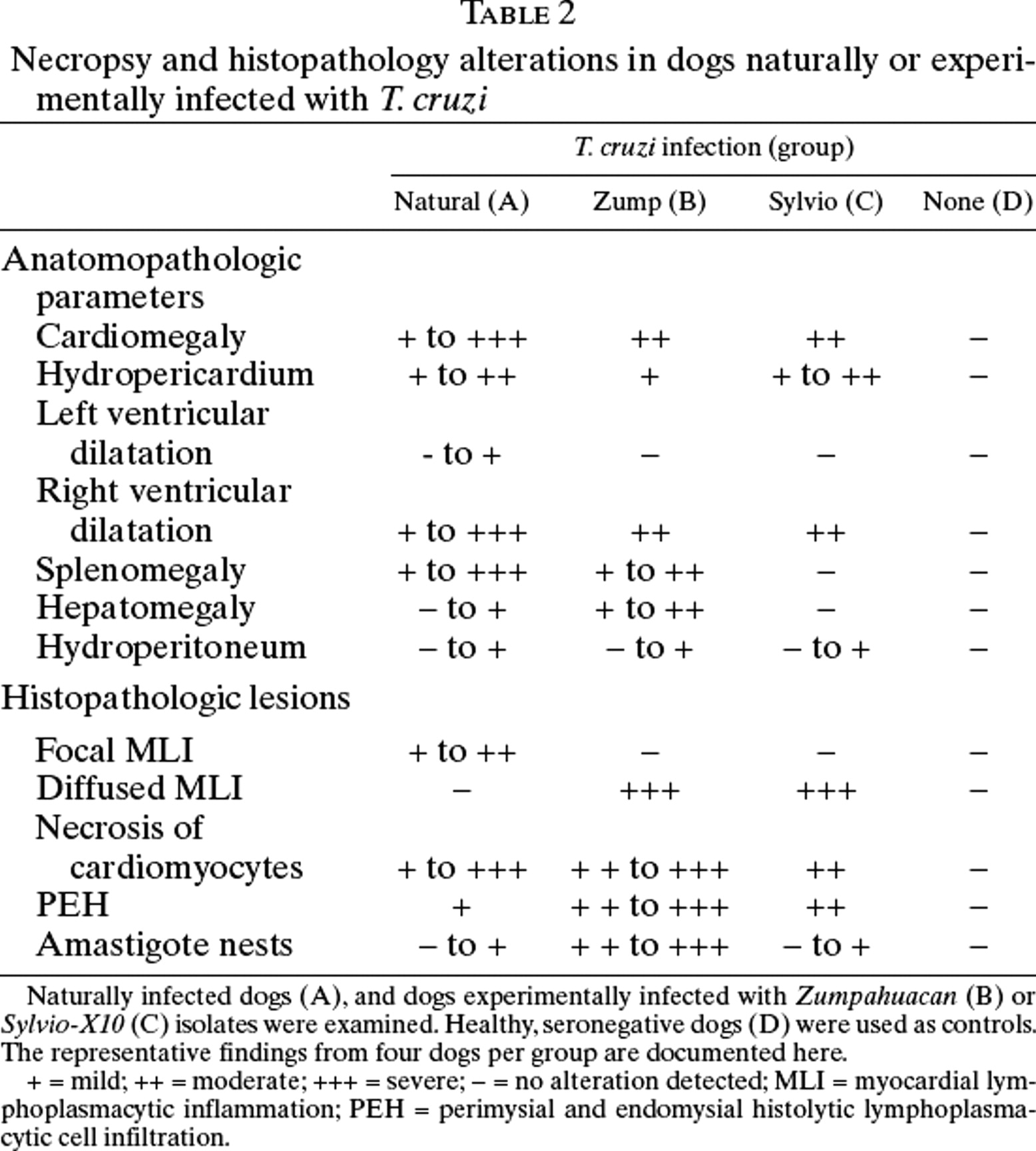