The areas where the serum samples were collected. 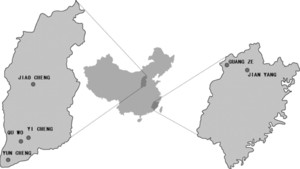 Seroprevalence of Human Granulocytotropic Anaplasmosis in Central and Southeastern China

Search for other papers by Guangyu Lin in
Current site
Google Scholar
PubMedClose
,
Jinrong He
Jinrong He

Human granulocytic anaplasmosis (HGA) is an emerging tick-borne infectious disease. To determine the prevalence of HGA in central and southeastern China, a total of 323 human sera were collected from individuals at high risk for exposure to ticks and animals. The IgG antibody against the etiologic agent of HGA, Anaplasma phagocytophilum was detected with indirect immunofluorescence assay. The results showed that 20% of the tested individuals (64/323) were positive to A. phagocytophilum and that the incidence was higher in male (22%) than female (16%). We concluded that A. phagocytophilum infection was prevalent in central and southeastern China.

Human granulocytic anaplasmosis (HGA) is a tick-borne disease caused by an obligatory intracellular bacterium Anaplasma phagocytophilum. It was previously known as human granulocytic ehrlichiosis (HGE). The HGA was first identified in the United States of America in 1994 from a patient with febrile illness.1 Since then the annual incidence of the disease gradually increased in the United States and in average more than 600 cases were reported annually from 2004 to 2006 by the Centers for Disease Control and Prevention (CDC).2 The disease has also been reported in Europe.3 Anaplasma phagocytophilum DNA has been detected from ticks in Israel, Japan, and China.4–6 The HGA was first reported in China in 2008 and the first HGA outbreak in China was noteworthy because it caused nosocomial infection.7 Because HGA only emerged recently in China, the pathogen of HGA has not yet been isolated and the epidemic data is incomplete. To determine the epidemiology of HGA in China, we studied the seroprevalence of HGA in risk populations from two areas in China, one forestry mountain area in southeastern China and one hilly area in central China. These areas were chosen because they are endemic for Lyme disease, and the pathogens of Lyme and HGA share the same tick vectors in the United States and Europe. 8,9

Three hundred three human sera were collected from May to July in 2007 from forestry workers, shepherds, or hunters that were at high risk for exposure to ticks. The other 20 serum samples collected from March to August in 2006 were combined with the 2007 samples for testing of HGA antibody. A 5 mL sample of blood was collected from each individual by venipuncture. The serum samples were obtained after centrifugation of whole blood and were stored at −20°C until use. Epidemiologic data were collected for each sampled individual including age, gender, job type, living place, medical history, and history of animal contact and tick bite.

Little is known about the epidemiology of human infection caused by A. phagocytophilum in China. Polymerase chain reaction (PCR) detection of 16S rRNA gene showed that A. phagocytophilum existed in ticks and rodents from northern China. 6,16 Very recently a death case was confirmed as a result of A. phagocytophilum infection. This case also caused a cluster of 9 cases of nosocomial infection among health care workers and family members after exposure to the index patient.7 Our serologic survey revealed a seroprevalence rate of 20% for A. phagocytophilum, indicating the existence of infection by A. phagocytophilum with a relatively high frequency among population at high risk for exposure to ticks in central and southeastern China. The seroprevalence rates in our study were higher than those reported in a recent study from North China. 17 This may be explained by the fact that we studied serum samples from high-risk population, which may not reflect that of the general population of the same country. Nevertheless, these studies indicated the urgency and necessity for large-scale serologic survey of high-risk population for A. phagocytophilum infection in China. Study of HGA was initiated only a few years ago and HGA is still not recognized by most doctors in China. The first HGA outbreak in China was mistakenly diagnosed as hemorrhagic fever. It is most likely that in the past and even right now the HGA cases in China were mistaken as hemorrhagic fever or other viral infections because clinical manifestations and laboratory test results of HGA are similar to viral infections. However, the treatment of HGA is very different from viral infection because HGA is sensitive to tetracycline. Thus, serologic studies of A. phagocytophilum infection among high-risk populations would provide valuable insights for developing public health strategies to prevent and control HGA. We hope this study can serve as an indicator to our clinicians that A. phagocytophilum infection was present among the population in the area studied. Patients in the endemic areas who present with nonspecific febrile illness after exposure to ticks should be evaluated for HGA. 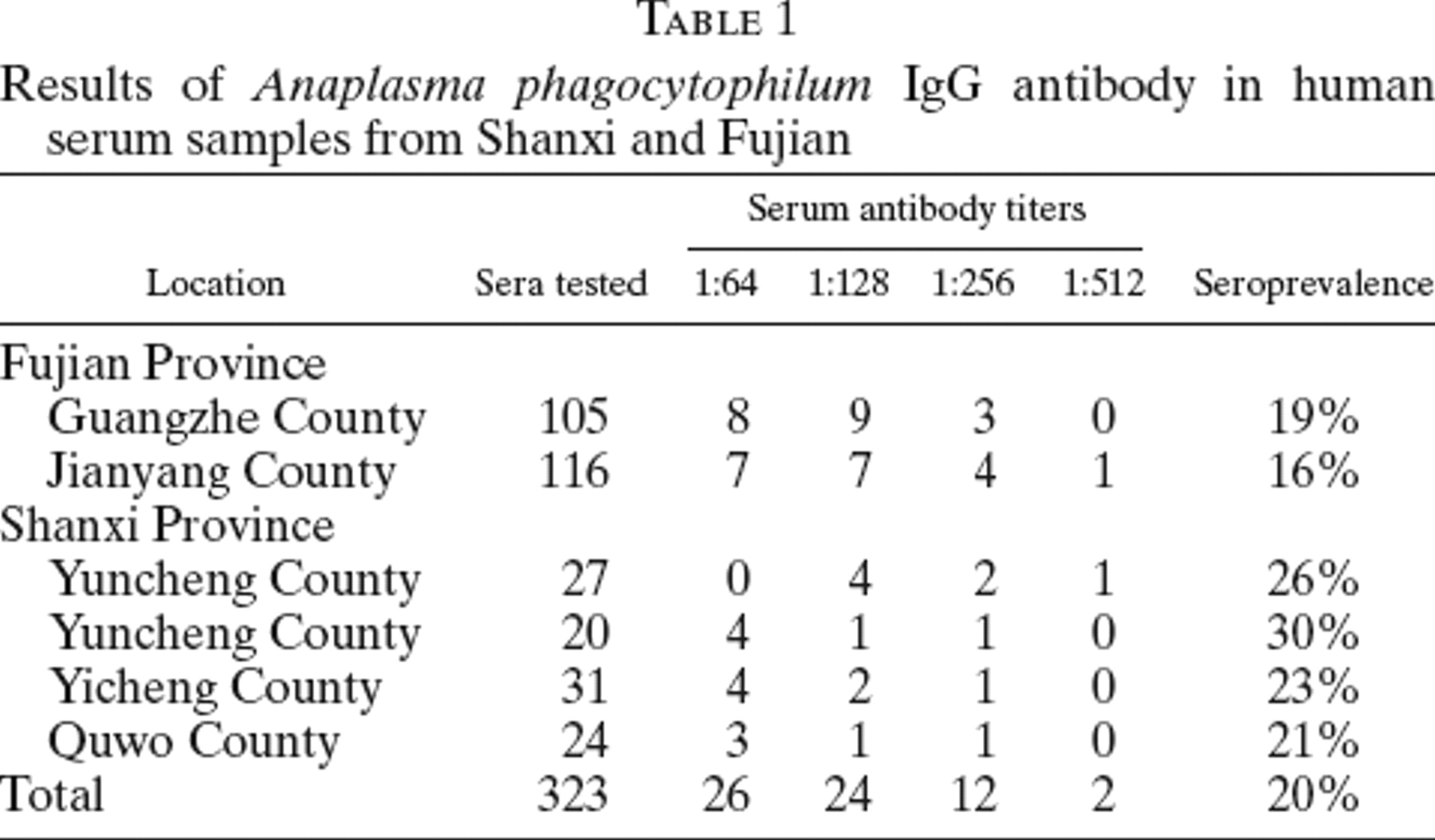