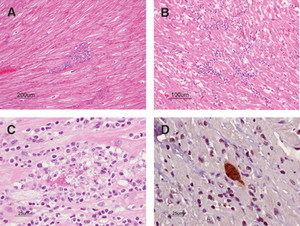 Search for other papers by Gene B. Hubbard in
Current site
Google Scholar
PubMedClose

American trypanosomiasis, or Chagas disease, is a zoonotic illness that is caused by the kinetoplastid protozoan Trypanosoma cruzi. It is a significant public health issue and a major cause of morbidity and mortality in Latin America. In some cases, it leads to chronic heart disease and eventual cardiovascular death. 1,2 Chagas disease is a major endemic threat in the Amazon region and is related to a complex set of interacting biologic and social determinants.3 Approximately 10 million people are chronically infected with T. cruzi , and 60 million are at risk of contracting the infection.4

Trypanosoma cruzi infection is also widespread among a variety of wild and domestic animals, including non-human primates that are maintained in endemic areas.5–8 Endemic infections of T. cruzi in dogs and wild animals have been found in Alabama, Arizona, California, Florida, Georgia, Louisiana, New Mexico, Texas, and even as far north as Maryland. 9,10,11

The complex life cycle of the parasite involves transmission by the triatominae (reduviid, assassin, or kissing) bugs. These insects deposit feces containing infectious forms of the parasite on the skin after taking a blood meal from the host. The host typically becomes infected when it rubs the fecal material into the bite wound, a mucosal surface, or conjunctiva. 12 The bugs are nocturnal, hiding in the daytime and emerging at night when they attack the sleeping prey. 13 Blood-sucking lice have also been suggested to be a potential vector. 14 Infection through the oral route has been documented in animals and humans, 15,16 and this route of infection is likely to be common in primates and wild mammals that serve as natural reservoirs.

The pathogenesis of chronic Chagas cardiomyopathy is incompletely understood; an intriguing aspect is the complex host–parasite interaction. 17 During the acute stage of infection, trypomastigotes, the mature form of the trypanosome, can be detected in the peripheral circulation, and morphologic criteria for identifying the organisms as T. cruzi can be applied. In contrast, during the chronic stages of the disease, the trypomastigotes effectively disappear from the peripheral circulation and are extremely difficult to detect microscopically.

In 1984, a baboon in an outdoor cage at the Southwest Foundation for Biomedical Research (SFBR) in San Antonio, Texas, died suddenly and was discovered to be infected with T. cruzi.18 It is presumed that the parasite was transmitted by a triatominae bug bite or by consumption of an infected bug.7 More recently, nests of amastigote forms of the parasite in host tissue and cardiac lesions consistent with Chagasic heart disease have been observed on necropsy in baboons that had been naturally infected with T. cruzi.7,8,14,19

Non-specific lymphocytic myocarditis (NLM) has been frequently observed in baboons at the Southwest Foundation for Biomedical Research (SFBR). This study describes spontaneous cases of NLM in captive baboons (Papio spp.) that share many features of myocarditis caused by T. cruzi infection, including the presence of lymphocytic infiltrates and necrosis, but without evidence of the parasite. With the aim of elucidating the relationship between T. cruzi and NLM, we used serial sectioning, serology, blood cultures, polymerase chain reaction (PCR), and immunohistochemistry.

The SFBR currently maintains a population of 2,600 baboons. The baboons used in this study were housed in two 6-acre corrals and outdoor metal and concrete gang cages. Water and food were provided ad libitum. The baboons were fed commercial monkey chow supplemented with an enrichment fare of grains, fruits, and vegetables. All animals were cared for in compliance with the Guide for the Care and Use of Laboratory Animals. All procedures were approved by the Institutional Animal Care and Use Committee. The SFBR is accredited by the Association for Assessment and Accreditation of Laboratory Animal Care, International.

We searched for diagnoses of NLM in the computerized pathology database (apath), which included all baboon necropsies done at the SFBR. Baboons with a history of experimental use were excluded from this analysis. Eighty-six baboons with spontaneous NLM were identified. Cases without complete clinical and pathology records or available serum were excluded, resulting in 31 baboons with spontaneous NLM based on the absence of microscopically detectable T. cruzi organisms in the myocardium but the presence of lymphocytic infiltrations and necrosis, consistent with T. cruzi infection. Eleven baboons with negative T. cruzi serology and no NLM were identified as negative controls. One baboon and one chimpanzee with myocarditis and confirmed T. cruzi organisms were used as positive controls.

Blood culture was performed on six baboons that had NLM and were positive for antibodies to T. cruzi. Ten milliliters of heparinized blood was centrifuged at 1,000g for 10 minutes at 4°C. Plasma was transferred to a 15-mL conical Falcon tube and centrifuged at 1,200g for 10 minutes at 4°C. After the supernatant was removed, the pellet was resuspended in 3 mL of liver infusion tryptose medium (LIT). The red blood cells and buffy coat were suspended in LIT at double the volume of the cells and centrifuged at 1,200g for 10 minutes at 4°C. The supernatant was discarded; the buffy coat was resuspended in 3 mL of LIT in a 15-mL Falcon tube, and the red cells were equally divided between two 15-mL Falcon tubes and resuspended in 5 mL of LIT. Each of the four tubes containing LIT was incubated with tightly stoppered caps at 28°C, shaken daily (on weekdays only), and inspected every 30 days for epimastigotes by light microscopy at ×40 magnification. If epimastigotes were not observed in any tube after 120 days, the hemoculture result was scored as negative.

Baboons that died or were killed at the SFBR were necropsied and a standard tissue sample set was collected, fixed in 10% neutral-buffered formalin, processed conventionally, embedded in paraffin, and stained with hematoxylin and eosin (H&E). Heart samples were typically taken from the left ventricle, near a papillary muscle.

The severity of the NLM heart lesion in each baboon was semiquantitatively graded as normal (0), mild (1), moderate (2), or severe (3) by a board-certified veterinary pathologist (G.B.H.).

Additional serial sectioning of cardiac muscle, blood cultures, immunohistochemistry, serology, and clinical histories (age, sex, weight, and clinical pathology) were analyzed to determine whether T. cruzi infection is associated with NLM. Data are presented as mean ± SEM and percentages. Baboons were divided into three groups for statistical comparison: seropositive baboons with NLM, seronegative baboons with NLM, and baboons without NLM. Comparisons between groups were done with analysis of variance for numerical variables, using the least significant difference (LSD) as a post hoc test and with χ2 test for qualitative variables. P < 0.05 was considered statistically significant.

Although multiple methodologies are used to confirm a diagnosis of T. cruzi, none is without limitations. We used serology, serial sectioning with H&E staining, immunohistochemistry, and blood cultures to determine whether NLM in baboons was associated with T. cruzi infection.

Although traditional histologic techniques are considered highly insensitive to identify parasites in the infected host, 20 they can show intracellular nests of kinetoplastid amastigotes. Microscopic visualization of T. cruzi organisms within tissues remains the gold standard for diagnosis. T. cruzi parasites are only rarely identified in conventional histologic sections of hearts from chronic chagasic patients, but they are believed to be present at low concentrations and necessary to cause the development of chronic chagasic myocarditis. 21 If T. cruzi organisms cannot be found using H&E staining, other diagnostic techniques such as blood cultures, immunohistochemistry, serologic assays, xenodiagnosis, and molecular analyses can be used to aid in the diagnosis of T. cruzi. We were only able to identify T. cruzi amastigotes by immunohistochemistry in one case of NLM; however, they would also have been visualized using traditional H&E methods in that section of myocardium. Immunohistochemistry did improve the speed and ease of identification of amastigote nests, but otherwise did not aid in the diagnosis of T. cruzi infection.

The difficulty finding amastigote nests is consistent with the findings in humans. T. cruzi organisms are absent or scarce in the chronic phase and the inflammatory infiltrate is not collocated with the presence of parasite nests in the myocardium. 22 NLM could be caused by autonomic involvement, microvascular disease, or autoimmune mechanisms. 21

Although T. cruzi organisms were only identified in 1 of the 31 cases by histology, serologic evaluation showed that 45% of the baboons with NLM were seropositive for T. cruzi. Because this colony was previously reported to have an overall prevalence of 2–3% seropositive for T. cruzi,8 our results suggest that T. cruzi is an important factor in the etiology of baboon NLM. The role of T. cruzi is supported further by the finding that, of the baboons with NLM, seropositive animals had more severe lesions than seronegative animals. The identification of T. cruzi in all six seropositive animals evaluated by blood culture further supports the validity of positive serologic findings.

Cellular and humoral immune responses are crucial to control parasitemia and parasitism during acute and chronic T. cruzi infection.23 Seroconversion for T. cruzi generally occurs in juveniles, and seroconverted animals remain positive throughout life.7 Circulating antibodies to T. cruzi persist throughout the chronic phase of infection and are not related to the presence of circulating parasites. 24

Slightly over one half of the baboons with NLM, and one of the two positive control animals, lacked detectable antibodies to T. cruzi. We occasionally observed false-negative serologic results, despite the presence of histologically identifiable T. cruzi amastigotes in necropsy tissue (G.B.H. and E.J.D., unpublished observations). We suspect these cases may be a consequence of either acute infection by T. cruzi or poor host antibody response.

We did not ignore the possibility that other agents may have caused lymphocytic myocarditis in these animals. Several classes of viruses have been shown naturally to induce myocarditis as a major feature of the pathologic response in diverse groups of wild, domesticated, and laboratory animals. Encephalomyocarditis virus (EMCV) 25,26 and Coxsackievirus 27 have been reported in baboons; however, antibodies to these viruses were not verified in any of these baboons with NLM.

The presence of T. cruzi antibodies in 45% of baboons with NLM, by comparison with a seropositivity prevalence of 2–3% of baboons in the colony at large, indicates that T. cruzi infection is a major cause of myocarditis in baboons, as it is in humans who live in endemic areas. 21 Furthermore, the increased severity of NLM in seropositive baboons by comparison with seronegative baboons further supports the notion that the T. cruzi parasite and or its antigens have an important role in the disease process.

Our results further validate the baboon as a high fidelity primate model for research on the natural history of Chagas disease. As new candidate drugs and candidate therapeutic vaccines are developed, the baboon can serve as an excellent model in translating the results from non-primate animals to medical practices that have high efficacy and safety in humans who are infected with T. cruzi. 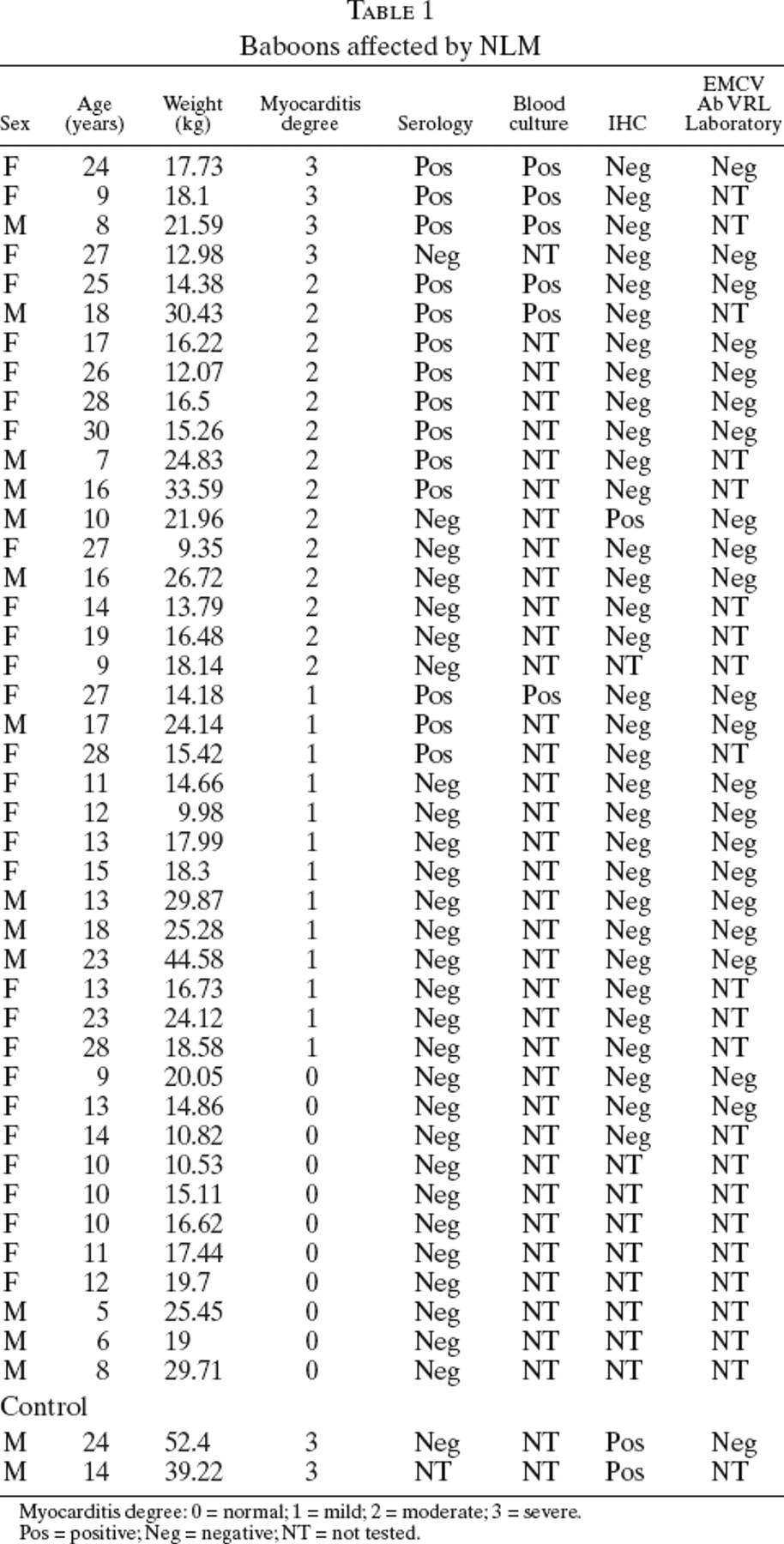 Statistical analysis of variables associated with NLM in baboons