Minimum-spanning network re-drawn from Mirabello and Conn (2006). Shaded haplotypes (D1–D5) are recorded from Jaque and Biroquera in the Darien, eastern Panama. Haplotype D2 is identical to M10 from Nuqui, Colombia. 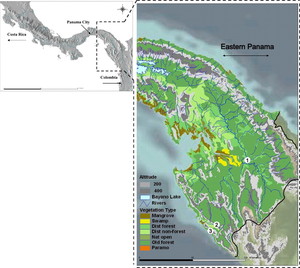 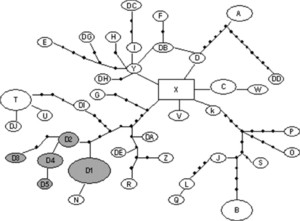 We report Anopheles darlingi in Darien Province in eastern Panama. Polymerase chain reaction–restriction fragment length polymorphism profiles of the single copy nuclear white gene and sequence comparisons confirmed the presence of 66 specimens of the northern lineage of An. darlingi. The parsimony network depicted 5 CO1 haplotypes in 40 specimens of An. darlingi, which connected through 7–8 mutational steps with sequences from Central and South America. Furthermore, the presence of haplotypes in Biroquera, Darien Province identical to those previously published from northern Colombia suggests that Panamanian samples originated in Colombia. Results of neutrality tests (R2 and Fu’s FS) were not significant and the mismatch distribution was multimodal and did not fit the model of sudden population growth. These findings may indicate a long and stable presence of An. darlingi in eastern Panama.

Panama (9°00′N, 80°00′W) reported 5,095 malaria cases during 2004, which represented a six-fold increase in the incidence since 2001. The highest prevalence of malaria occurs in rural areas where more than 60% of the population is indigenous, living in extreme poverty and more vulnerable to malaria infection.1 Four moderate-high risk areas for malaria transmission in Panama are Bocas Del Toro, Ngöbe Buglé Comarca, Kuna Yala Comarca, and Darien. Some of these locations are currently undergoing extensive changes in landscape because of an increase in tourism.

Among the reasons proposed for the recent increase in malaria cases in Panama is a change in vector species composition because of colonization and possible adaptation of some anophelines to new settings that is prompted by changes in landscape features. This scenario has taken place in other geographic contexts, i.e., Anopheles darlingi, the primary malaria vector in South America, has undergone extensive colonization in Iquitos, Peru, the western Amazon region in Brazil, 2,3 and the city of Belém.4 In parts of the northeastern region of the Amazon, An. darlingi, has been replaced mostly by An. marajoara.5 Moreover, An. darlingi has increased in abundance during the past 10 years in the Peruvian Amazon most likely because of deforestation. Consequently, Plasmodium falciparum has reinvaded areas in which malaria was previously eradicated. 2,6 In Panama, studies on changes in Anopheles species composition have not been conducted despite substantial anthropogenic perturbation during the past three decades. Loaiza and others7 recently examined the distribution of Anopheles mosquitoes in Panama. They identified 14 species and suggested that An. albimanus, An. aquasalis, and An. punctimacula are each potential malaria vectors. However, An. darlingi was not collected during this survey.

Anopheles darlingi is broadly distributed from southern Mexico to northeastern Argentina, and in some parts of Central America, but has never been officially reported in Nicaragua, Costa Rica, or Panama, resulting in an apparent discontinuity in its distribution.8 One hypothesis to explain finding An. darlingi in Darien is a relatively recent invasion from Colombia into eastern Panama that may have been enhanced by local changes in the landscape because of deforestation and other anthropogenic changes. 9,10 However, An. darlingi may have been present in eastern Panama for a longer time, but it has never collected or may have been misidentified.

In the present study, we report An. darlingi in Darien, the region in eastern Panama with the highest prevalence of drug-resistant P. falciparum. In addition, we identified which lineage of An. darlingi is present in Panama and investigated the genetic relatedness between our samples and previous published sequences of the mitochondrial cytochrome oxidase subunit 1 (CO1) gene.

We collected adult mosquitoes using the human landing catch technique and Centers for Disease Control and Prevention (CDC) miniature light traps (LTs) for four uninterrupted hours (6:00 pm–10:00 pm). Anti-malarial drugs were taken by collectors on the basis of recommendations by Instituto Conmemorativo Gorgas de Estudios de la Salud (ICGES) in Panama, and prior consent was obtained. The ICGES safety board reviewed and approved the mosquito collecting protocol. Adult females were killed in the field with chloroform, placed individually in 1.5-mL tubes, and stored in plastic bags with desiccant. Larval stages of Anopheles species were caught using a standard dipping technique during three consecutive days per locality. 11 Third- and fourth-larval stages were retained for adult emergence and species confirmation. Mosquitoes were sorted by species using the morphologic key of Wilkerson and Strickman. 12 These mosquitoes were subsequently hand carried to the United States, where molecular identification and sequencing was carried out by the Wadsworth Center Molecular Genetics Core and the Griffin Laboratory, New York State Department of Health (Albany, NY).

Molecular identification of An. darlingi was carried out using two approaches. First, we amplified by polymerase chain reaction (PCR) and sequenced a portion of the mitochondrial CO1 gene and confirmed the sequences as that of An. darlingi CO1 using the BLAST algorithm nucleotide search (http://blast.ncbi.nlm.nih.gov/Blast.cgi). Second, we used PCR–restriction fragment length polymorphism (PCR-RFLP) of the single copy nuclear white gene to distinguish between northern and southern An. darlingi, which are thought to be in the early stages of lineage divergence. 13 The PCR-RFLP profiles were confirmed by sequencing 800 basepairs of the white gene, and nucleotide sequences were compared with known sequences of CO1 and white gene lineages. 13 Procedures and primers used for DNA isolation, PCR amplification and sequencing of the CO1 and white genes have been reported. 10,13

Genealogic relationships among An. darlingi CO1 haplotypes were investigated using a statistical parsimony network implemented in the program TCS version 1.12. 14 For this analysis, we used other previously published CO1 sequences from several countries encompassing the geographic distribution range of An. darlingi (GenBank accession nos. DQ298209–DQ298244). 10 Neutrality tests of Fu’s FS15 and R216 were used to test for population size changes assuming neutrality 17 and calculated in DnaSP, version 4.50.02. 18 In addition, the mismatch distribution, 19 and the haplotype and nucleotide diversities were computed in Arlequin version 3.11. 20

A total of 1,056 female mosquitoes belonging to 10 Anopheles species were collected in Yaviza, Jaque, and Biro-quera (Table 1 and Figure 1). Anopheles punctimacula was the most common species (51.5%), confirming previous findings in Darien where it seems to be largely predominant.7 In contrast, An. albimanus was less prevalent overall (26.7%), but more common than An. punctimacula in Jaque. Anopheles darlingi was more prevalent than An. albimanus in Biroquera, but proportionally less abundant than An. punctimacula and An. apicimacula (Table 1). Anopheles darlingi was only collected in Jaque and Biroquera by human landing catch, and not recorded in either LTs or in larval collections. Furthermore, An. albimanus was the most common species in larval collections and An. punctimacula, An. apicimacula, and An. oswaldoi s.l. were the only species collected in LTs. We also collected eight specimens of An. nuneztovari s.l. in Biroquera where previous sampling has not identified this species (Table 1).7 The CO1 gene sequences from Jaque and Biroquera showed 100% identity with An. darlingi CO1 gene sequences (GenBank accession nos. AF417698 and AF270932) reported by Sallum and others. 21 The PCR-RFLP profiles of the single copy nuclear white gene and sequence comparison confirmed the presence of 63 mosquitoes of the northern An. darlingi lineage in Biroquera and 3 in Jaque.

Five CO1 haplotypes were detected in 40 An. darlingi mosquitoes, three from Jaque and 37 seven from Biroquera (GenBank accession nos. FJ550354–FJ550358). All haplotypes were separated in the parsimony network by 7–8 mutational steps from sequences of Central and South America. Moreover, six sequences from Biroquera were identical to haplotype M (D2 in Figure 2), which had been previously found in Nuqui, Colombia, 10 thus suggesting a Colombian origin for the Panamanian samples (Figure 1). The haplotype diversity (Hd) and nucleotide diversity (Nd) for the CO1 gene were moderate to low (Hd = 0.58, SD = 0.07 and Nd = 0.0006, SD = 0.0003, respectively), which could suggest a past bottleneck and subsequent expansion with a rapid buildup of mutations. 22 Nevertheless, results of neutrality tests (FS = 2.23 > 0.05 17 and R2 = 0.014 > 0.05 18) were not significant and the mismatch distribution was multimodal and did not fit the model of sudden population expansion.

A history of malaria cases and the almost exclusive occurrence of P. falciparum in eastern Panama, where An. albimanus is not as prevalent as other Anopheles species, suggests that its incidence there may be related to the presence of a more efficient and possibly unidentified vector in this region.7 In 2007, an outbreak of P. vivax and P. falciparum malaria (97 cases) occurred in Puerto Piña, which is located approximately 5 km from Jaque. Although no Anopheles species survey was conducted at the time, we hypothesize that An. darlingi could have been the main vector during this episode. Panama has undergone significant changes in land use, urbanization, and human migration since 1960, 23 and these changes may have altered the habitats for Anopheles larvae. However, we believe these changes have not yet affected areas such as Jaque and Biroquera, which are still geographically isolated, and where An. darlingi breeds in partially shaded and clean bodies of water, often associated with rivers and floating vegetation.

Seventy percent of Darien is still covered by forests, which provide ample breeding sites for An. darlingi and other Anopheles species.24 Our results, in which we collected 45% of the total Anopheles species reported from Panama in Darien, support this conclusion.7 Moreover, the balance in the proportion of low-, intermediate-, and high-frequency CO1 gene haplotypes in Panama, nonsignificant neutrality test results, and a multimodal mismatch distribution support a stable past effective population size for An. darlingi in eastern Panama and argue against a bottleneck caused by a possible recent invasion. Nevertheless, a larger sample size, more localities, other molecular markers, and a more sophisticated simulation analysis that does not depend on summary statistics to construct the mismatch distribution will be required to fully evaluate the presence of An. darlingi in eastern Panama.

In the present study, An. darlingi was not collected in Yaviza, which is located approximately 300 km from Panama City. However, with future environmental perturbation in Darien, An. darlingi could expand towards central and western Panama and contribute to a range expansion of P. falciparum into new areas, aggravating the malaria situation. Additional sampling throughout Darien and Kuna Yala Comarca may identify An. darlingi in other localities where P. falciparum has been previously encountered. At the local level, the influx of either refugees escaping from armed conflict in Colombia or travelers visiting eastern Panama, plus the presence of An. darlingi, are likely to intensify malaria outbreaks by P. falciparum in Darien. In the short term, it will be necessary to avoid unplanned deforestation through more sustainable methods of development for agriculture and human settlements in Darien. This in combination with traditional malaria control measures will reduce the likelihood of a possible expansion of An. darlingi into western Panama.