Decline in conidial viability of 5 strains of Metarhizium anisopliae sprayed in oil formulation onto a glass substrate and maintained at 26°C. Mean ± SE.

Decline in conidial viability of 5 strains of Beauveria bassiana sprayed in oil formulation onto a glass substrate and maintained at 26°C. Mean ± SE. 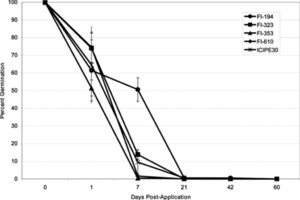 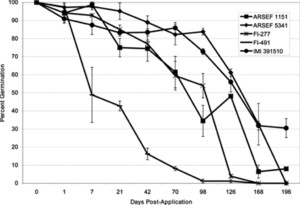 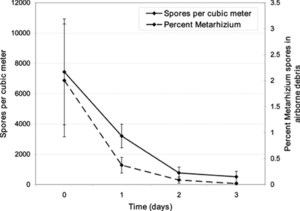 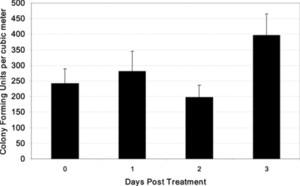 Entomopathogenic fungi, such as Metarhizium anisopliae and Beauveria bassiana, are being researched as alternatives to chemical adulticides to control mosquito vectors of malaria and dengue. Two cited concerns of fungal control include conidial viability and risks fungal entomopathogens pose to human health. We measured spore viability of 10 fungal isolates over 26 weeks and found a range of persistence. Three B. bassiana isolates maintained ≥ 50% viability 14 weeks after application. No M. anisopliae isolate persisted longer than 1 week. To help assess risk of conidia as potential human allergens, we measured airborne conidia in enclosed environments after simulated biopesticide treatment of M. anisopliae. Conidia were detectable immediately after treatment, with concentrations of ~7000/m3, decreasing over 48 hours to 500 conidia/m3. At most, Metarhizium conidia comprised 2% of total visible particulate matter, falling to 0.1% by 2 days. The implications for viability of biological control of adult mosquitoes are discussed.