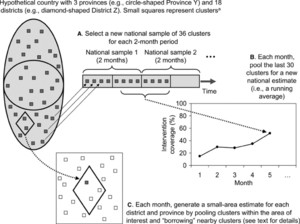 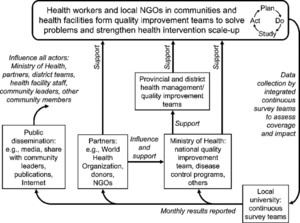 Potential of Integrated Continuous Surveys and Quality Management to Support Monitoring, Evaluation, and the Scale-Up of Health Interventions in Developing Countries

Well-funded initiatives are challenging developing countries to increase health intervention coverage and show impact. Despite substantial resources, however, major obstacles include weak health systems, a lack of reasonably accurate monitoring data, and inadequate use of data for managing programs. This report discusses how integrated continuous surveys and quality management (I-Q), which are well-recognized approaches in wealthy countries, could support intervention scale-up, monitoring and evaluation, quality control for commodities, capacity building, and implementation research in low-resource settings. Integrated continuous surveys are similar to existing national cross-sectional surveys of households and health facilities, except data are collected over several years by permanent teams, and most results are reported monthly at the national, province, and district levels. Quality management involves conceptualizing work as processes, involving all workers in quality improvement, monitoring quality, and teams that improve quality with “plan-do-study-act” cycles. Implementing and evaluating I-Q in a low-income country would provide critical information on the value of this approach.

Precision would be lower if the indicator was measured in only 6 months of year (e.g., if the survey content varied over the year—see text for example).