Box plot distribution of the percentage of positivity (PP) of the cathepsin L enzyme-linked immunosorbent assay in patients with a single cyst infection, patients with more than 1 cyst, negative controls, and patients with other helminth infections. 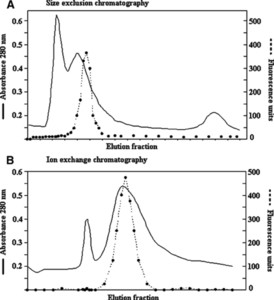 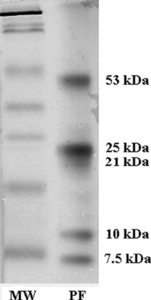 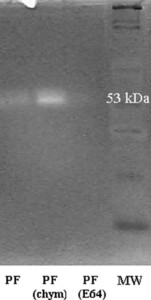 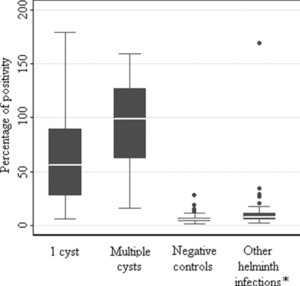 Neurocysticercosis, an endemic parasitic disease in most developing countries, is caused by Taenia solium and compromises the human central nervous system. Cathepsin L-like proteases are secreted by several parasites including T. solium and constitute important antigens for immunodiagnostics. A protein fraction with cathepsin L-like activity was purified from the cysticercus fluid by size exclusion and ion exchange chromatography. Cathepsin L-like activity was measured fluorometrically by detecting the hydrolysis of the fluorogenic substrate Z-Phe-Arg-AMC. The purified protein fraction included antigens of 53 and 25 kD that were tested in a Western immunoblot and in an enzyme-linked immunosorbent assay (ELISA) for detection of human cysticercosis. The sensitivity of the Western immunoblot was 96% for patients infected with multiple cysts and 78% for patients with a single cyst. Specificity was 98%. The sensitivity of the ELISA was 98% in patients with multiple cysts and 84% in patients with a single cyst. Specificity was 92.7%.