Trial profile of hydrocele patients treated in Ghana. Of the 68 patients, 42 (22 treated with doxycycline and 20 treated with placebo) patients were present at all time points. p.t. = post treatment.

Effect of doxycycline treatment on Wolbachia sp. depletion in Ghana. At every examination, blood was obtained from each patient and microfilaremia was determined. A total of 500–1,000 microfilaria were isolated from the blood by filtration and DNA was extracted from purified microfilaria. The copy numbers of the ftsZ gene were measured by real-time polymerase chain reaction (1 ftsZ = 1 Wolbachia sp.) and normalized to the number of microfilaria in each sample. After doxycycline therapy, the number of Wolbachia sp. was significantly reduced at all follow-up examinations. The Wolbachia sp. loads recorded for the doxycycline group at 12 and 24 months post-treatment was obtained from one patient who was microfilaremic at both time points. 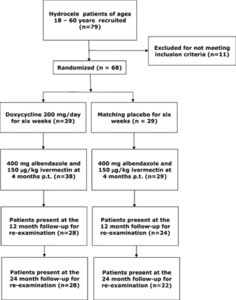 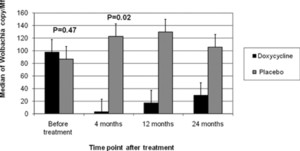 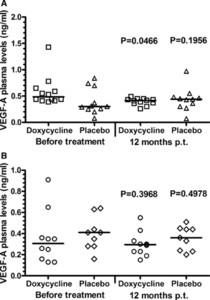 The treatment for hydrocele is expensive, invasive surgery—hydrocelectomy. A drug that could prevent or improve this condition could replace or supplement hydrocelectomy. In Ghana, 42 hydrocele patients participated in a double-blind, placebo-controlled trial of a six-week regimen of doxycycline, 200 mg/day. Four months after doxycycline treatment, patients received 150 μg/kg of ivermectin and 400 mg of albendazole, which is used for mass chemotherapy in this area. Patients were monitored for levels of Wolbachia sp., microfilaremia, antigenemia, plasma levels of vascular endothelial growth factor-A (VEGF-A) and stage/size of the hydrocele. Wolbachia sp. loads/microfilaria, microfilaremia, and antigenemia were significantly reduced in the doxycycline-treated patients compared with the placebo group. The mean plasma levels of VEGF-A were decreased significantly in the doxycycline-treated patients who had active infection. This finding preceded the reduction of the stage of hydrocele. A six-week regimen of doxycycline treatment against filariasis showed amelioration of pathologic conditions of hydrocele patients with active infection.