Fluid-attenuated inversion recovery (FLAIR) MR image 2 weeks after eflornithine treatment of a 27-year-old patient from Angola with West African trypanosomiasis. The MRI shows an extensive confluent hyperintense signal located fronto-parietally in the white matter. The right hemisphere is more affected than the left, resulting in some compression of the right ventricle. 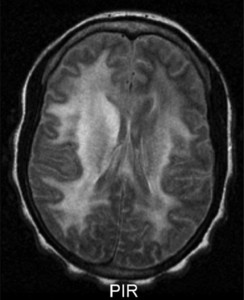 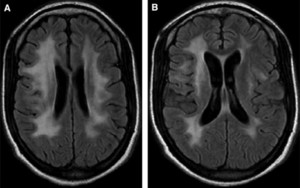 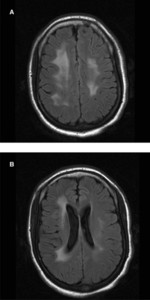 Magnetic Resonance Imaging Findings in Human African Trypanosomiasis: A Four-Year Follow-up Study in a Patient and Review of the Literature

Serial magnetic resonance imaging (MRI) was performed up to 4 years after treatment in a patient with Trypanosoma brucei gambiense infection. Four years after treatment and cure abnormalities were still present, although the patient led a normal social life, without physical and mental impairments. The literature on MRI in human African trypanosomiasis is reviewed. The MRI is useful to discriminate between encephalitis induced by trypanosomiasis and post-treatment reactive encephalopathy, a severe and often fatal complication of treatment, in particular of treatment with arsenicals. The MRI is not useful for diagnosis of human African trypanosomiasis (HAT).