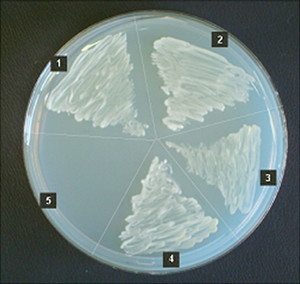 Cyclic AMP–protein kinase A (PKA) signaling is important for the growth and differentiation of Trypanosoma cruzi. Immunofluorescence suggests that PKA can associate with the plasma membrane of trypomastigotes. We found that the PKA regulatory subunit interacts with several P-type ATPases. These P-type ATPases may play a role in anchoring PKA to the plasma membrane in T. cruzi.

Trypanosoma cruzi is the etiologic agent of Chagas disease and is also seen as an opportunistic infection in immune-compromised patients.1 This organism has four distinct developmental life stages: the epimastigote and metacyclic trypomastigote in its insect vector, the amastigote, an intracellular form, and trypomastigote, a blood form, in its mammalian host. Cyclic AMP-protein kinase A (PKA) signaling has been implicated as a regulator of stage differentiation in T. cruzi.2,3 In mammalian cells, the molecular explanation for the specificity of PKA is provided by its compartmentalization through association with A-kinase–anchoring proteins.4 In T. cruzi, the mechanism for PKA targeting remains unknown. Previously, we reported on our characterization of both the catalytic (TcPKAc) and regulatory (TcPKAr) subunits of PKA in T. cruzi.5,6 To identify potential anchoring proteins of TcPKAr, we performed yeast two-hybrid and co-immunoprecipitation assays and found that several P-type ATPases interacted with TcPKAr.

P-type ATPases are membrane proteins that can transport specific ions, including Na +, K+, Ca2+, and H +, across membranes against concentration gradients. We previously reported the molecular cloning and characterization of a T. cruziNa+-ATPase that plays a role in adaptation of different ionic environments.7 In mammalian cells, a P-type ATPase, the Na +-K+-ATPase, has been reported to anchor a group of proteins mediating signal transduction activating multiple protein kinase cascades including mitogen-activated protein kinase and protein kinase C.8 Our data suggest that P-type ATPases may have a similar function as anchoring proteins for PKA in T. cruzi.

The generation of a specific antibody for Na +-ATPase was previously described by Iizumi and others.7 A new antiserum in Balb/c mice was produced to recombinant protein from a 200 amino acid region of the C terminus of T. cruzi P-type ATPase (Tc00.1047053509611.80) using Freund’s adjuvant (Sigma, St. Louis, MO) at a 1:1 dilution with boosting at 4 and 12 weeks. The specificity of this C-terminal antiserum was confirmed by immunoblot.

IFA using mAbs against TcPKAr showed that, in trypomastigotes, TcPKAr was associated with the flagellum and membrane. In addition, subcellular fractionation followed by immunoblot analysis indicated that TcPKAr was present in the membrane-associated fraction in trypomastigotes (Supplemental Figure). In addition to this membrane staining, cytoplasmic staining was also evident in all three forms of T. cruzi, and secondary antibody did not show staining (data not shown). Under high stringent selection conditions (-Leu, -Trp, -His),9 two full-length and a C-terminal partial P-type ATPase were confirmed to interact with TcPKAr (Figure 1); these proteins were as follows: 1) a cation-transporting ATPase, putative (Tc00.1047053509611.80; C-terminal 329 amino acids); 2) a calcium motive P-type ATPase, putative (Tc00.1047053510769.120; full length); and 3) a Na +-ATPase (GenBank accession number AB107891; full length).7 Immuno-complexes precipitated by TcPKAr mAb contained an 120-kDa band, which was recognized by antibodies to Na +-ATPase, and an 140-kDa band that was recognized by anti-cation-transporting ATPase, indicating that TcPKAr associated with P-type ATPases. Complexes from both anti-Na +-ATPase and anti-cation-transporting ATPase contained a 56-kDa band recognized by TcPKAr mAb (Figure 2).

PKA is held in an inactive form by the association of its two catalytic subunits (PKAc) with a PKAr dimer. When cAMP concentration increases, PKAr binds cAMP at two sites and dissociates from PKAc, allowing PKAc to phosphorylate its substrates. 10 In metazoans, PKAr binds to A-kinase anchoring proteins with high affinity, mediating the compartmentalization of PKA and ensuring its specificity by placing PKAc close to its appropriate effectors and substrates.4 In T. cruzi, the PKAr binding proteins remain unknown. We identified several P-type ATPases that interact with PKAr. We also tested whether TcPKAc would interact with these P-type ATPases in the yeast two-hybrid system and found that they could not interact in this system (data not shown). This indicates that interactions of TcPKAr and these P-type ATPases are specific. One of the candidates turned out to be a Na +-ATPase mediating adaptation for high Na +, which we had reported previously.7 These are the first PKAr binding proteins identified in T. cruzi.

P-type ATPases are expressed in all living organisms. 11 The primary structures of various P-type ATPase catalytic subunits contain eight conserved motifs solvated in the cytoplasm, where ATP binding and hydrolysis occur. 11,12 The primary function of Na + -K+-ATPase is to transport ions across the cell membrane. However, some mammalian Na +-K+-ATPase α-subunits contains multiple well-characterized protein-binding motifs, all of which are located outside of the eight conserved core regions of P-type ATPases. 11 In humans Na +-K+-ATPase serves as an anchor for a signalosome.8

TcPKAr can be seen on the plasma membrane of trypomastigotes and co-precipitates with P-type ATPases. Na +-ATPase expression is increased in trypomastigotes.7 Such P-type ATPases probably play a role in anchoring TcPKAr to the membrane. The trypomastigote is the infective form, which encounters both host immune responses and ionic alterations as it is released from host cells. Anchoring TcPKAr to the membrane may bring the holoenzyme to the vicinity of parasite surface, where it could alter the phosphorylation of key proteins involved in invasion and/or adaptation to changes in the environment. A hydropathy plot of Na +-ATPase showed multiple cytoplasmic domains, including an N-terminal domain, a small loop, a large loop, and a C-terminal domain.7 Alignments of the amino acid sequence showed that conserved sequences among P-type ATPases exist in the cytoplasmic domains of this protein.7 Further studies of the motifs that mediate interaction between TcPKAr and these P-type ATPase proteins may lead to the understanding of the mechanism of TcPKAr targeting to the membrane.