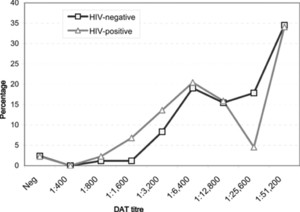 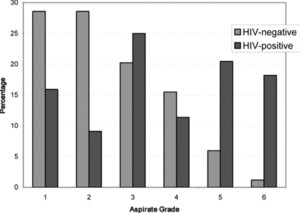 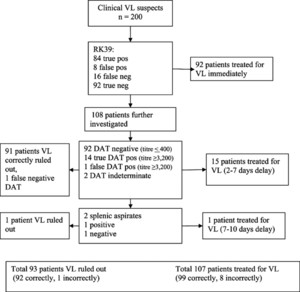 Accuracy of an rK39 rapid diagnostic test (DiaMed-IT-Leish ®) for visceral leishmaniasis (VL) was compared with splenic aspiration and the direct agglutination test (DAT) in a population with a high prevalence of infection with human immunodeficiency virus (HIV) in Ethiopia. There were 699 patients clinically suspected of having VL (153 parasitologically confirmed, 482 DAT confirmed, and 130 DAT negative), and 97 DAT-negative controls. A total of 84% were tested for HIV and 34% were HIV positive. Sensitivity of the rK39 test in parasitologically confirmed VL patients was 84% (77% in HIV positive and 87% in HIV negative; P = 0.25). Sensitivity of the DAT was higher (94%; P = 0.01), 89% in HIV-positive patients and 95% in HIV-negative patients; P = 0.27). Specificity of the rK39 test was 99% in DAT-negative controls and 92% in DAT-negative patients clinically suspected of having VL. A diagnostic algorithm combining DAT and the rK39 test had a sensitivity of 98% in HIV-positive VL patients and 99% in HIV-negative VL patients. Despite the lower sensitivity in a population with a high prevalence of HIV, the DiaMed-IT-Leish ® rK39 test enables decentralization of diagnosis. Patients clinically suspected of having VL who show negative results on the rK39 antigen test should undergo follow-up DAT testing, especially if they are HIV positive.