Detection of P. knowlesi DNA by nested PCR. The expected PCR product is 153 bp in size. Negative controls consisting of water and positive controls from DNA extracted from a previously identified P. knowlesi infection in human and PCR product of DNA extracted from whole blood of our patient were carried out in duplicate. Molecular size markers in base pairs are in the rightmost lane. 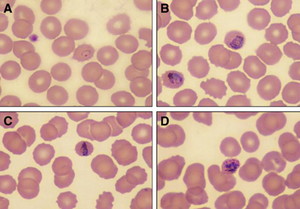 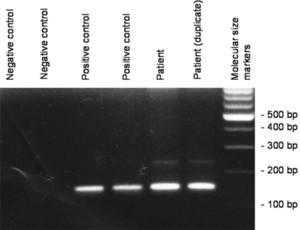 Plasmodium knowlesi has recently been recognized as the fifth Plasmodium species causing malaria in humans. Diagnosis is difficult morphologically, and currently, available rapid tests have not been comprehensively evaluated with this pathogen. We report a case of P. knowlesi malaria that was confirmed after the initial clue of discordant microscopy and immunochromatographic results, highlighting the importance of molecular diagnostics in cases with the relevant clinical and epidemiologic history.

Plasmodium knowlesi is a simian malaria parasite and is recently recognized as the fifth malaria parasite infecting humans. As this is a newly recognized infection, rapid diagnostic tests are not yet established, and blood film microscopy is difficult as the parasite is often incorrectly identified. Polymerase chain reaction remains the gold standard for diagnosis but requires time. We report such a case of P. knowlesi infection with discordant microscopy and immunochromatographic results, emphasizing the need to be vigilant especially in regions which are endemic and in close proximity to habitats of macaques.

A previously healthy 33-year-old Singaporean was admitted in October 2007 with a 3-day history of fever, malaise, nausea, and vomiting. He had just completed military reserve training in a forested area in northwestern Singapore a week before admission. His last overseas travel was a month before to Phuket, Thailand.

He had a fever of 40°C for 3 days with no chills or rigors and mild jaundice but no hepatosplenomegaly. His white cell count was 4.44 × 109/L, hematocrit was 41.6%, and platelet was 44 × 109/L. Serum bilirubin was 48 Umol/L (N < 30), aspartate transaminase (AST) was 294 U/L, and alanine transaminase (ALT) was 282 U/L. Renal function was normal. Dengue fever was ruled out with negative serology and reverse transcription-polymerase chain reaction (RT-PCR).1

His thin blood film for malaria parasites showed possible mixed Plasmodium falciparum with P. malariae infection with a parasite load of 0.2% (equivalent to 7,700 parasites/mmol/L blood) as shown in Figure 1.

The OptiMAL rapid malaria test (DiaMed AG, Morat, Switzerland) was positive for P. falciparum. The BinaxNow Malaria test (Inverness Medical, Binax) had both bands positive, signifying either a mixed infection of P. falciparum with another species or P. falciparum alone. The conflicting microscopic and immunochromatographic results with no history of exposure to P. falciparum–endemic areas led to a molecular investigation.

The patient’s sample was positive for malaria DNA based on the real-time PCR for small subunit ribosomal RNA (SSUrRNA) of Rougemont and others.2 The sample was negative for P. falciparum, P. vivax, P. ovale, and P. malariae. Using a nested PCR that specifically targeted another site on the SSUrRNA but was previously shown to be specific for P. knowlesi3 showed an expected 153-bp product (Figure 2). Sequence analysis of the SSU rRNA PCR product using Pmk8 and Pmkr9 primers with a direct sequencing approach showed highest (97%) homology with P. knowlesi (U83876).

The patient was treated with chloroquine and then primaquine with a rapid response. He was well on follow-up a month later without recurrent parasitemia on malaria blood film examination.

Plasmodium knowlesi is a well-known cause of simian malaria, predominantly affecting long-tailed macaques, which was first detected in a human > 40 years ago.4 Human infections have been reported in East Malaysia,5 Thailand,3 and recently in Singapore,6 suggesting a wider distribution across Southeast Asia. Diagnosis is a challenge. Indeed, the first human case of P. knowlesi malaria was initially thought to be P. falciparum, and then P. malariae the next day, only to be confirmed as P. knowlesi after inoculation of the infected human blood into rhesus monkeys.4 This common misidentification occurs as early trophozoites of P. knowlesi appear as ring forms, similar to P. falciparum. Late trophozoites of P. knowlesi appearing as “band forms,” schizonts and gametocytes resemble P. malariae.5 Similar findings were also detected in our patient (Figure 1).

The OptiMAL rapid malaria test detects parasite-specific lactate dehydrogenase, whereas the BinaxNow Malaria test detects histidine-rich protein II (HRP-2) specific to P. falciparum and a pan-malarial antigen common to all four human malaria species. Both tests have their limitations,7 and the unusual result in our patient indicating either mixed infection or P. falciparum alone led to more specific molecular testing. The specific reason for the observed cross-reaction of BinaxNow Malaria test with P. knowlesi antigens was not determined in our study. However, it is likely that the antigen capture test was developed, and its specificity was determined by comparing the reactivity of the antibodies used in the assay against P. falciparum, P. vivax, P. ovale, and P malariae, but not P knowlesi.8 Our observation underscores the need to include P. knowlesi in the development and validation of malaria diagnostics, as well as in proficiency panels for quality assurance testing of laboratories offering malaria diagnostic services. The antigen-capture test recently developed based on monoclonal antibodies (mAbs) to Plasmodium lactate dehydrogenase (pLDH) that was able to rapidly diagnose P. knowlesi9 similarly needs to be validated for its specificity and sensitivity.

Plasmodium knowlesi infection has been shown to be transmitted between humans and non-human primates.4 Although most human infections are mild, severe infections have occurred. 10 The treatment is typically with chloroquine and primaquine. Quinine has also been shown to be effective.5 Relapse after treatment and drug resistance have not been reported, and the optimal type of malaria prophylaxis is unknown.

In conclusion, P. knowlesi is a fifth Plasmodium species causing human malaria. Large prospective studies are needed to determine its true prevalence in humans in the region and beyond. Clinicians should suspect this diagnosis in individuals with the appropriate travel or contact history (in areas with macaques) and the degree of suspicion should be enhanced by ambiguous microscopic and rapid diagnostic tests.