Polymerase chain reaction products using glutamate-rich protein oligonucleotides to determine genotype of the parasites in two persons who had parasitemias at days 7, 21, and 28, respectively. M = Ava II – λ DNA marker. Size of the DNA bands for both persons are the same on days 0 and 7 but different on days 21 and 28, respectively. 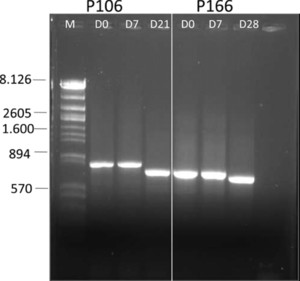 Reports on treatment failures associated with the use of first-and second-line antimalarial drugs chloroquine and sulfadoxine-pyrimethamine have recently increased in many parts of Indonesia. The present study evaluated artemisinin-based combination therapy for treatment of persons with uncomplicated Plasmodium falciparum malaria in West Sumba District, East Nusa Tenggara Province. A total of 103 persons 1–57 years of age were enrolled, given standard artesunate-amodiaquine therapy, and followed-up for 28 days. All persons clinically recovered, but two persons were again parasitemic on day 7. This finding indicated that these two persons had recurrent parasitemias on days 21 and 28. Molecular analyses suggested both recurrences were caused by reinfections. There were no severe adverse events, but complaints of gastrointestinal upset, nausea and vomiting, and headache linked to therapy occurred among 9.7%, 5.8% and 5.8% of the persons, respectively. Artesunate-amodiaquine proved efficacious therapy for treatment of persons with uncomplicated P. falciparum malaria at one site in eastern Indonesia but it may have tolerability problems that merit further investigation.