Map of the state of Oaxaca depicting the distribution of localities with malaria cases in the six sanitary jurisdictions during the study period 1994–2005.

Incidence of Plasmodium vivax malaria primary and secondary clinical cases. A, Distribution by age. B, Incidence according to the altitude of the village of residence. C, Incidence by gender. 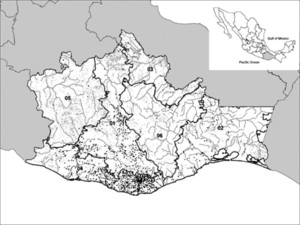 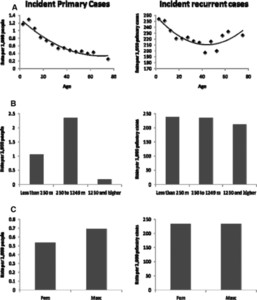 The Participation of Secondary Clinical Episodes in the Epidemiology of Vivax Malaria during Pre- and Post-Implementation of Focal Control in the State of Oaxaca, Mexico

The participation of vivax malaria secondary clinical was researched in a retrospective cohort of 33,414 confirmed cases occurring between 1994 and 2005 in the state of Oaxaca, Mexico. Secondary episodes occurred in 23.4% of all primary cases. An increase in secondary episodes was associated with primary cases occurring during the dry seasons (risk ratio [RR] = 1.68, 95% CI: 1.45–1.96). The incidence of secondary episodes peaked at an older age, occurred similarly in men and women mostly during low mosquito abundance, and had a uniform distribution among localities. A reduction in secondary episodes was associated with the administration of an increased dose and early administration of primaquine (RR = 0.32, 95% CI: 0.26–0.38). However, limitations to distinguish relapses from re-infections impede assessment of the new treatment effect on relapses and its contribution to malaria control in the area. These findings highlight the need for new therapeutic schemes to radical cure of P. vivax infections and operational research aimed at parasite pool elimination.